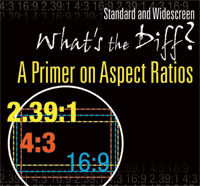 With widescreen fast becoming the default format, what’s the best way to convert your traditional 4:3 images for widescreen viewing?

The aspect ratio is the width of a picture in relationship to its height. “Normal” television images were in the 4:3 ratio (also sometimes expressed as 4×3), which means that the width of the image was 4 units wide by 3 units high. This ratio remained constant, whether the TV screen was a 7-incher or a 27-incher; the aspect ratio refers to the relationship of width to height, regardless of the actual physical dimensions of the image.

The three most common ratios are 4:3, 16:9 and 2.39:1, although there are (and have been) several other ratios used in different countries and at different times. However, these three are the main ones we’ll focus on here. Let’s take a closer look at each:

You’ve probably watched a widescreen movie on a traditional (4:3) screen TV at some point, right? If you did, then you’ll recall that the image had a black border on its top and bottom – this border is the result of a technique called letterboxing. Letterboxing reduces the image in size until it fits the screen, leaving black bars above and below the picture, much like the view you would get by peering through a letterbox slot, which is how the name originated.

The downside to letterboxing is that the image is smaller, which makes it tedious to watch on a small-screen TV. Many people complain that they are losing part of the picture with letterboxing, although this is absolutely untrue; the black bars at the top and bottom of the image undoubtedly fuel this incorrect belief. While letterboxing certainly isn’t a panacea, it is indeed the “purest” method of preserving and displaying the actual imagery as originally shot.

Since letterboxing deals mainly with displaying Cinemascope images on a 4:3 screen, this isn’t really a major concern for the vast majority of us. What is a pertinent issue these days is how to convert 4:3 video for viewing in 16:9 widescreen format.

Well, there are basically three ways to do it: pillars, stretching and zooming.

Pillars – This method places the 4:3 footage in the middle of the 16:9 frame, flanking it on both sides with black vertical columns or pillars, hence the name. Thus, you do not alter the original footage in any way, so it is, in effect “pure,” which is a good thing. However, many people find the black pillars distracting.

Stretching – In this method, the 4:3 image is stretched horizontally, to make full use of the 16:9 screen area. This is the most popular method with widescreen TV owners for watching traditional 4:3 television programs. Sometimes it works well; other times it causes a lot of distortion, and it almost always makes people look fat.

Zooming – This third method simply magnifies the 4:3 image to fill the wide screen, but it keeps the aspect ratio in correct proportion. The downside is that it crops the image as a result of the zoom, so you’re not seeing everything that’s in the original frame. Most film transfers pan around on the image so the most active part of the picture appears on the transfer.

So, as you can see from these descriptions and the accompanying visuals, there really isn’t any perfect way to convert 4:3 into 16:9, but, if you’re shooting in 16:9 format to begin with, you shouldn’t have any problems at all. 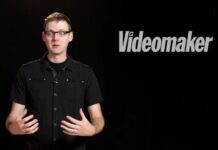