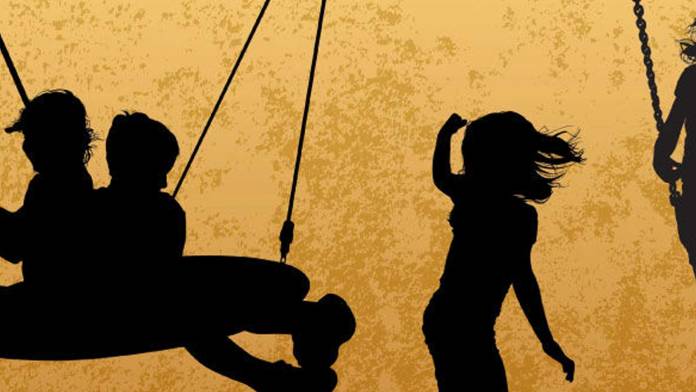 Protecting the identity of kids or obscuring their faces can be easily done in your editing software: you just place a huge black or blurry dot over their faces. This is hardly an artistic approach, and it can get downright boring. So here are a few tips for shooting general scenes of children on playgrounds or in classrooms, while disguising their identities and adding a little more artistic edge to your video. These tips work for any producer who wants to disguise a person’s identity, and you don’t have to cut off someone’s head to do it. Just think outside the little black dot, and use your creative imagination.

First, let’s separate this lesson into two concerns: between the ethics of this kind of shoot and the aesthetics of making it interesting.

Ethics: Don’t be a Creep

First off, and we cannot stress this enough: always protect yourself first, when shooting in this kind of an environment. In some foreign countries, you might not have an issue with showing children’s faces or even approaching them on the street. In the USA, however, we have been bombarded with enough fear-factor information about stalkers and video creeps to justify your concerns. We’ve heard many horror stories about creeps using cell phones to videotape unsuspecting people in bathrooms and other public places, and, sometimes, it’s not even illegal. To read more on this subject, see our story, Shooting in Public in our What’s Legal column at www.videomaker.com/article/13774

There are several ways to protect yourself and the children you are videotaping. Find a contact within the school who knows you and your reputation as a video producer. Ask for a personal introduction to the school principal, to inform him or her of your intentions. You may then have to approach the school district’s department heads, depending on your school system’s rules, and go from there. Sometimes, individual private schools might be easier to approach than the public district due to bureaucratic red-tape.

Don’t just go to the school on the day you expect to shoot. Not only do you have to give plenty of time to advise the school administrators of your intentions, but also the teachers and parents. You want to assure them that you are not going to show faces and that you are a legitimate filmmaker. Bring proof that you are indeed working on a valid project. On the preliminary meet-n-greet day, you should come equipped with a well-prepared treatment of must-haves to prove your legitimacy and explain your needs.

Statements to Bring Along:

You might suggest that a school employee can be with you at all times, and maybe even interview the principal to bolster the official’s ego.

Now that you have made your intentions known to the school officials, you’ll need to work with the parents. Make informational flyers to send home with the kids that sound enthusiastic and include a message from the principal, explaining your project. Plan to have an evening meeting date at the school when the parents can talk with you face-to-face about your movie. Find out who’s in charge of the school’s PTA and request to attend the next meeting. Make yourself known.

Finally, once you’ve been given access, make a point of never being alone with a child at any time – not even if you are with your associate. Always have a school administrator or teacher with you. If you need to interview a child, make sure you have permission covered all the way around, even requesting that the child’s parent be present, along with the school official. Remember: the goal is to protect that child, and yourself.

Remember: the goal is to protect that child, and yourself.

Assuming you’ve covered all your legal bases and have been granted permission to shoot in the classroom or on the playground, you still have that sticky situation of hiding the children’s identities. Here are a few tricks to disguise IDs but still make the shots creatively interesting and aesthetically pleasing.

Field of Vision: Stand about five feet outside the schoolyard fence during recess, and focus on the fence, not the kids. The fence creates a natural frame for your blurred subjects in the background. If you have a dolly or stabilizing device or if you are very stable with handheld use, you can slowly truck along the sidewalk, keeping the fence in frame, to add movement to the shot.

Empty Swing: On the grounds, try a shot with an empty swing swaying in the foreground, in and out of the frame, with blurred images of children in the distant background. This sets a different mood, perhaps one of loneliness or longing.

Full Swing: You can do the same thing with a child in the swing, with his back to the camera. Frame half of the scene with the child swinging forward and backward, and the other half with the out-of-focus children in the distance.

Extreme Closeup: Children’s hands and feet are easy subjects to focus on while they’re interacting with playground equipment. Hopscotch and tether-ball are games that focus on a child’s hand or foot movement. You can actually disguise a child’s face quite well if you shoot an extreme closeup of the side of the face that includes hair, ears, eyelashes and cheeks, perhaps as she moves into or out of the scene. Again, the trick is to have something in the background that says “school” when her face moves out of the picture.

Show of Hands: Shooting inside the classroom is trickier because of lighting and the size of the classroom, you can’t always count on a shallow depth of field to give you a soft focus area. So, first, establish a wide shot using the teacher before throwing in closeup shots. Set your tripod in the back of the class, just a bit above the children’s height, to establish the POV of the child. Have the kids focus on the teacher and raise their hands. Shot two, of course, is a closeup of raised hands in the air. A nice clean background with the chalkboard or child’s art is an added touch, as is a rack focus from the teacher’s face to the raised hands.

Readin’, Writin’ and ‘Rithmetic: Once you’ve established the wide shot, the most obvious shots are the kids themselves. A long low-angle of all the desks with kids writing and heads bowed is nice. Or set your tripod low in the center of an aisle, with two rows of desks partially framing the shot. The center point can be a bookcase, teacher or chalkboard. Fill the rest of your needs with closeup shots of kids writing in their workbooks or on the chalkboard. An extreme over-the-shoulder closeup of a child’s ear and eyelashes, while focused on the work on the desk is a great shot that shows a child, while not showing who the child is.

Child Talk: Finally, if you need to interview a child but still keep his face obscured, give him something to do with his hands while he talks to you. Hand him a toy, book or fingerpaint, and shoot above his head, down at his hands. Try to get a portion of the side of his face, ear and eyelashes in soft focus and the hands and toy in acute focus. Another idea is to shoot an exterior shot in late afternoon, using shadows or obscured reflections. Shoot the child’s hands in the foreground of your shot, with his shadow on the school wall or as he’s on some playground equipment reflecting shadows on the ground.

Mugshot: The typical “mugshot” image we all see in news stories is flat and often formless. To improve on this style, shoot the person in a partial profile, to give facial shape. If you’re really good with the lighting, try to set part of the face in soft shadow. Keep in mind, however, that some profiles are very distinct: think about Alfred Hitchcock’s famous profile. To light this kind of shot, you usually want a backlight pointed right at and slightly above your subject’s head, and the “spill” to just touch on the rim or highlights of his hair. You can then obscure the image more completely by placing a soft-edged dot over the inner portion of his face in post production. To add interest and tie in theme, have a chalkboard in the background or a stack of books in the foreground background.

Timelapse: I did a story on school crowding where I set up my camera in the back of an empty classroom, focused a quarter of the edge of the frame on an extreme closeup of a cupful of freshly-sharpened pencils and kept the rest of the image soft. After holding this shot for a minute, I had the teacher let the kids file in and go to their desks, where they opened their books, and I continued shooting a few more minutes, never turning off the camera. I cut the 10 minutes to 30 seconds, dissolving between a few shots of first an empty classroom, then one filling up with 5, 10, 20 and finally 30 children. It was very effective. The cup of pencils kept the shots tied together.

Sound Carries: Most of these tips we’ve talked about cover video aesthetics, but natural sound from a playground or classroom can be very powerful. Shoot an empty classroom or vacant playground late in the afternoon, when the shadows are lengthening on the playground and the classroom is unlit, except by the barest element to show detail. But… use sound full from a shot you got earlier, when the playground was packed or when the kids were entering or exiting the class room. Playground or classroom sounds are very distinguishable; playing the full sound with an empty scene can be a very moving image.

Buy Your Image: Finally, there will be some times in your work where you’ll really want the face-on shots, and nothing else will do. We use stock footage on occasion here at Videomaker, and you can find all sorts of companies that sell stock shots per image, per group or as a full bundle. Check out our Stock Media Buyer’s Guide to find out more on the subject.