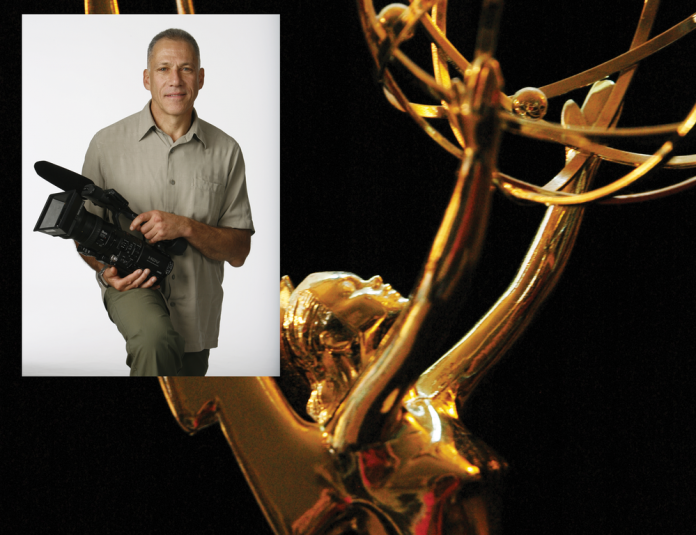 How many Emmy Awards have you won? If your answer is similar to mine – zero – then I ask you, “What is keeping us from that silverware?” (see Silver, Pewter and Gold Sidebar) Maybe someone who has won many Emmys can tell us how to get started.

We had the pleasure to sit down with New York native Jon Alpert a short time ago just after his return from the 85th Academy Awards celebration where his short documentary Redemption, co-produced by Matthew O’Neill, was nominated. Alpert has won 15 Emmy Awards, four duPont-Columbia Awards, a Peabody Award and a great number of other accolades. It’s looking like he needs a much larger display cabinet then the one holding all his statuettes at the Downtown Community Television Center, one of the nation’s first community media centers which he started with his wife, Keiko Tsuno, back in 1972.  We began the conversation by asking Alpert about the dawn of his filmmaking career in the early 1970s in New York’s Chinatown.
“We just wanted people to watch our films. First two or three years nothing was broadcast at all. Nothing was broadcast on cable TV because they didn’t have cable TV in our neighborhood because [Chinatown, NYC] was a poor neighborhood and they [wired] the poor neighborhoods last. There was no Internet, [you] couldn’t show it on the Internet. Nobody of our background, with our experience had ever gotten anything on TV before. So we had very simple ambitions: just to have as many people watch the films as possible. It was very labor intensive, I mean, you had to go find those people, you had to bring your equipment to their places, you had to make sure that you held their attention. That is how we started.”

It would be more than thirty years before a little thing called YouTube would be born, so Alpert and his crew needed a way to get their short videos to the masses. Alpert bought an old mail truck for $5 and mounted television monitors in the side and parked it in different areas of Chinatown, where he was living. He built it, but they didn’t come. They then started showing videos about Chinatown and the people stopped to watch.
A couple of years later Alpert got his first big break. Cuba: The People, Part 1 broadcast on PBS in 1974, presented the first American TV coverage inside the communist Caribbean island in 10 years.
“If there was an award for enthusiasm … we could have won an award for that, but not in terms of overall quality of camera work or editing because it was a pretty primitive show and we were pretty primitive filmmakers.” But that airing on public TV inspired Alpert and his crew. “We made rapid progress, again, not because we were thinking we have got to get better because we want to win an award, we wanted the programs to be more effective and to engage the audience better and that meant improving our craftsmanship, improving the storytelling.”

Following in the Footsteps

Let’s assume, like Alpert, you have made a great film. You’ve shown it around so it’s not only you with the superlatively positive review. You’ve got something that would be of value to a wider audience and an Emmy nomination, or win, might just give it the bump it needs to go from an audience of 10 to 10,000. Where do you go? What steps do you take?
“The first award I remember winning was an Emmy Award for Third Avenue: Only the Strong Survive (1980). I think we won a cinematography award and an editing award, they were craft awards. I have no memory of why we applied, who applied…” Alpert told us.

To win this particular award, first your program needs to air on television and then you need to apply for an Emmy. Three groups judge the programs and narrow the field to a specific number of contenders then decide awards. The most known of the three is the Academy of Television Arts and Science (ATAS), headquartered in Los Angeles. They award the Primetime Emmys. The Regionally-based National Academy of Television Arts & Sciences (NATAS) awards the Emmys for daytime programs, news and documentaries, sports and technology & engineering. The International Academy of Television Arts & Sciences present Emmys for programing produced and originally aired outside of the US. There are also regional awards for local news broadcast entries.

“It’s very important, if anybody wants to compete, that they at least participate as a juror so they understand the process of what goes on and how this happens, otherwise it is just a total mystery. You want to encourage friends and people you respect to also participate as jurors so that the bigger the jury pool, the more democratic it is.”

All three of these organizations give Emmys for many categories. For example, the New York Chapter of NATAS awards 54 statuettes for categories as diverse as Investigative: Single Story, On-Camera Talent, Lighting: Studio and Video Journalist, just to name a few. Check your regional NATAS webpage for their full list of awards.
In New York, someone wanting to participate completes an online form and uploads their program via NATAS NY’s website. Submission fees in New York are $125 for members and $225 for non-members. A one-year membership costs $126 ($35 student), which comes with a decent list of discounts in the media industry and invites to special events. According to the NATAS New York’s website, “If you are a professional actively engaged in the television industry and/or related media fields you are eligible to become a Professional member of NY NATAS.”
Alpert says, “I think it certainly is easier to qualify for an Emmy award than it is to qualify for an Oscar. I think you just have to get it broadcast. I think it definitely helps to get broadcast by a major network because it gives you credibility and there is also a chance that there will be a buzz about your film by people who would have seen it as opposed to being release by a network that doesn’t have many viewers.”  He continues, “Sometimes it’s hard to find somebody to broadcast your work and you have to be able to have your music licensed, which is very expensive. You have to have E & O Insurance (Errors and Omissions), which is very expensive. When you take care of those things, which you have to if you’re going to broadcast, it adds some thousands of dollars to your bottom line.”
So now you are a member of the Academy, you’ve completed your film and jumped all the hurdles to get it broadcast on the small screen, either local, national or international and you’ve applied for the Emmy … all done, right? Don’t rent the tuxedo yet.
“It’s also very important, if anybody wants to compete, that they at least participate as a juror so they understand the process of what goes on and how this happens,” Alpert advised us. “Otherwise it is just a total mystery. You want to encourage friends and people you respect to also participate as jurors so that the bigger the jury pool, the more democratic it is. If it’s a very small jury pool and lets say – as an example – MTV packs it or HGTV or Oprah packs it, it increases the possibility of a program from those channels winning.”

What are the costs just for a nomination?

We don’t remember anyone saying that it is easy to make films/video. But you’ve done it: conceived, planned, produced, completed post-production, aired it on television and submitted it for consideration. You sat in on the judging process as a juror and voted and your work won a nomination; congratulations! Now what?
“It’s interesting because I remember that we were applying [for the award] ourselves and I remember somebody from the academy calling me and asking me if I was coming to the awards dinner and I said, ‘How much is a ticket?’ And it was 200 bucks or 250 bucks and that was a huge amount of money for us. So I said, ‘I’m only going to come if we’re going to win.’ And she says, ‘Well, you know, I can’t tell ya.’ And so I said, ‘Well, I’m not going. Please have someone accept it for us. We just can’t spend that money and not know.’ So she thought for a second and said, ‘Well, Jon, I won’t tell you if you’re winning or not, but I will tell you that if you decide that you are not coming, you’ll be very disappointed.’ So we went and won.”
The 56th Annual New York Emmy Awards Gala costed $350 for members and $400 for non-members, was a black tie event held at the New York Marriott Marquis in Times Square on April 14, 2013, which included a cocktail reception, dinner and the awards presentation.
Many believe that if you have been nominated, you’ve already won, but ascending the stage to accept the tall, gold statue of a winged woman holding a globe is priceless and confirms that all of your hard work has paid off.

In the End – it’s Your Vision, not the Win, That Satisfies

As they say, winning isn’t everything, but it helps confirm and validate the work you’ve done. But if you shoot just for the award, and not the final project, you might be left feeling empty after it’s over. Jon Alpert had some closing advice right before we turned off the recorder, “If you wake up in the morning and think, ‘I want to be a great filmmaker’ and you want to conform to whatever your preconceived idea of what a great filmmaker should be, I don’t think you are going to make as good a film as if you woke up in the morning and said you want to make a great film and you didn’t think about yourself and you didn’t think about the awards. Whenever we’ve done our best work, the awards always came last.”
[SIDEBAR]
Silver, Pewter and Gold
An Emmy is made of high-grade pewter and electroplated in copper, then nickel, then silver. Finally, it's electroplated in 18-karat gold. It weighs 4.75-pounds (2.15kg), and is 16-inches (40.64cm) high. The R.S. Owens Co. makes the Emmy statuettes. This company also makes the Oscar awards, presented by the film industry.
Morgan Paar is an award winning producer/shooter/editor at Nomadic Frames as well as a professor and consultant.