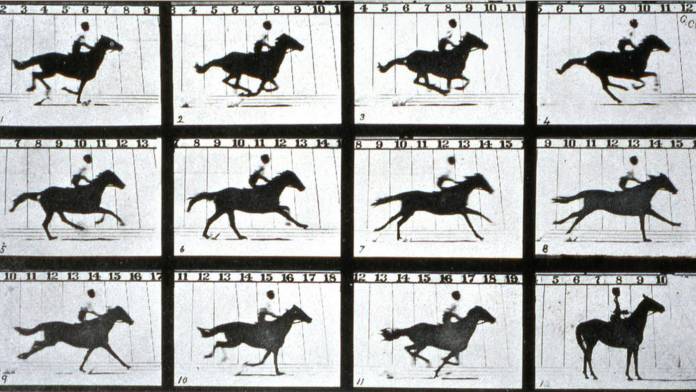 As often is the case, when new technology comes along, many people are afraid of what it represents; they scoff at it or dismiss it as a fad.

Then along came a gamble, so the story goes. A wager was set by Leland Stanford, a former governor of California, (to whom Stanford University is named after, among other notable estates.) Stanford was a horse owner – race horses in particular – and he made a wager that a trotting horse’s hooves couldn’t all be off the ground at the same time. In other words, at least one foot had to be on the ground at any given moment. It’s alleged that Stanford just wanted to find out if it was true, but in equine circles, they say he was trying to study horses’ gaits to improve their training. Either way, Stanford contacted Muybridge, who had been doing photographic landscape experiments and asked him if there was a way to satisfy his curiosity.

In 1872, Muybridge worked out an elaborate trip-wire system by placing 12 stereoscopic cameras 21 inches away from each other over a 20-foot stretch using a 1/1000th shutter speed; a remarkable speed and amazing feat for the time. This 20-foot stretch covered the length of a horse’s full stride and when all the pictures were strung together the experiment worked, and showed that a horse does – at some moments in its stride – have all four feet off the ground while trotting. This moment in time was the beginning of motion picture history.

The original moving pictures of that experiment no longer exist, but Muybridge went on to study other ‘bodies in motion’ and his famous galloping Horse in Motion footage as well as bison, sheep, and many different studies in human motion are still around. 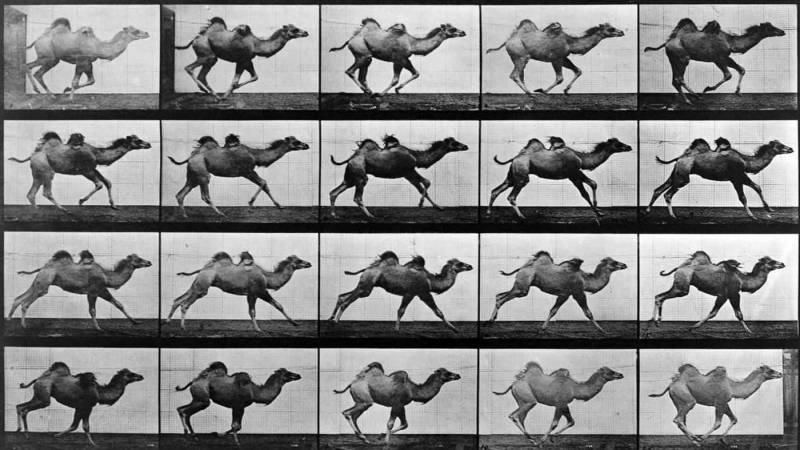 Show it with “Record Players”

Muybridge went on to show his work using a device he invented called a zoopraxiscope, which spun a disc similar to an old fashioned record-player, but instead of grooves on the record there were photos that passed under an eyepiece like binoculars. The spinning disc made the images appear to blend together, thus, many still frames of moving images made up a movie, which is actually similar to the frame-by-frame technology used today.

Muybridge also inadvertently proved that two of a trotting horse’s feet – one in front one in back on the opposite side – are always under the horse’s belly. For a galloping horse, all of the legs are under the horse at the moment it is completely off the ground – airborne, so to speak. These were important things to know for Stanford’s horse trainers. The horse “pulls” with it’s front feet, then “pushes off” with the back feet when running. Funny that we all know this now, it’s like “well, duh!” but it was a pretty amazing discovery back then.

And the scoffers? They weren’t the horse people, or the photographers at the time; the people who pooh-poohed his work as fake were the artists. They painted running horses with all legs extended; the two lead legs way out in the front and the back legs jutting behind, in what was called a “rocking horse” stance – which Muybridge’s galloping horse images proved was not realistic. The artists didn’t want to believe they had been painting running horses wrong, so they protested the ‘moving pictures’, saying they were fake and the work of a magician’s tricks.

It just goes to show how interesting history is, and how film, photography and video have helped history find the truth along the way.