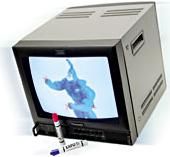 Many of the new video cameras out there (like Sony’s DCR-TRV17) furnish the user with the ability to do stop-motion animation, thus allowing full-grown adults to pull out their childhood toys and bring them to life as an "artistic" endeavor.


Likely, many readers have tried experimenting with this animation feature and I thought they might appreciate a cheap, simple trick my friends and I figured out (since "cheap" is what we’re all about).


One frustration animators have is keeping track of the previous scene in order to keep the movements of any objects or figures as smooth as possible. It is, of course, unwise to keep backing up the tape to review your progress. Instead, we found that by having a simple monitor screen hooked up while filming and using dry erase, wipe-off pens on the face of the screen, we are able to keep track of the action.


Simply choose reference points on the figures to be moved, like feet, hands, tentacles, etc. (usually at least three points for a figure), and mark a dot directly on the screen at each point. Continue to do this with each frame captured and soon you’ll have dotted lines representing the sweep of the action across the screen. As the action progresses, wipe off the dots from several previous frames to keep from cluttering the monitor.


A great way to keep your action figures standing on a carpeted mini-set is by cutting little pieces of adhesive Velcro tape and applying them as tread on the bottom of their feet (or tentacles). I find the "actors" are much more cooperative this way.

To rewind and fast forward old VHS tapes, use a cheap or old VCR, rather than a tape rewinder. VCRs sense the end of the tape electronically and stop without subjecting tape leaders to undue tension and possible breakage.

Mini DV for Editing Only

Need a VCR that has a jog shuttle capability, reads time code and is controlled through an IEEE-1394 interface for the price of a typical Mini DV camera?


Well, the solution is to purchase a "typical Mini DV camera" and use it exclusively for editing. Since you only need the recording/playback mechanism and not the other stuff, i.e. lens, CCD, etc., then using the cheapest unit you can find should work just fine. The playback/recording electronics and mechanism are the same as in the expensive unit.

I saw your article on time-lapse video, called Two Hours in Ten Seconds [August 2001], and I became very interested in the topic. I went to the Web site you mentioned (www.mediabuilder.com) seeking the time-lapse video shareware program, but I was unable to find it (only tons of .gif animations). But here is what I found on my own: Win TLV 2.0, published by C3 systems, at www.demonweb.co.uk/c3sys/wintlv.htm. I tried the software and it seems to work just fine.

Thanks for the tip, Luis. Time-lapse video shareware can be found at www.davecentral.com/projects/timelapsevideo and other shareware sites.