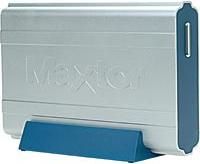 Remember when $600 was a good price on a 13GB Seagate Barracuda A/V hard disk? Analog MJPEG capture rates needed 10,000 rpm drives that sounded like Everglades’ fan boats and were hot enough that the kids could use your PC as an Easy Bake oven when you captured video. Well, those days are long gone. In-camera digital compression has lowered the data rate necessary for acquisition, drive technology has improved and drive sizes have increased 20 fold. Best of all, the price-per-gig is a fraction of what it once was, with some video-capable drives falling well below $1/GB after rebates. Maxtor’s latest OneTouch external drive offers an incremental improvement over the previous version, but the price/performance/features are remarkable as a whole.

A no-hassle drive with massive capacity.