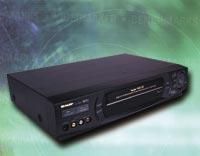 Since the increased popularity of Hi8 and Digital Video, we’ve seen a steady decline in camcorders in the S-VHS format. S-VHS VCRs, however, have managed to hold their own in the high-end consumer marketplace. They’ve also managed to come down in price quite a bit, which is good news for budget-minded video editors who plan on mastering to S-VHS.

Set at a low price, Sharp’s VC-S100U S-VHS VCR has some limited editing capabilities. It doesn’t come equipped with any advanced editing features, so it’s not for videographers looking to set up a serious linear editing system. Rather, the VC-S100U is an inexpensive high quality deck ideal for dubbing master tapes and for home theater enthusiasts to record and watch their favorite programs.

One of the VC-S100U’s strengths lies in its simplicity. Setting it up for operation was fast and painless. We simply plugged it in, connected it to the television using the cables provided and the VCR automatically tuned itself to the available channels. Within a few minutes of opening the box, it was ready to roll.

The VC-S100U is not meant to be an editing deck. Although it can perform basic copies and edits, there is no audio/video dub capability to perform insert edits. It has a shuttle ring for rapidly accessing scenes, but no jog dial for frame-to-frame advance. It also features a slow-motion playback mode that works only with the remote control. This is a VCR that’s capable of playing and recording both VHS and the higher quality S-VHS formats and its robust horizontal resolution makes for great-looking copies. If you have another VCR, the VC-S100U would make a great source or record deck. But because it lacks any kind of editing protocol or any other advanced features for precise editing, it’s suited better for straight dubbing or perhaps a mastering VCR for a nonlinear editing system.

Whether you’re dubbing tapes from a camcorder or outputting to another VCR, the VC-S100U has both composite and S-video inputs and outputs to connect to most camcorders and VCRs. It also has RF jacks to connect to older television sets that require RF cables. Sharp also had the foresight to provide S-video and composite jacks on the front panel, as well as the back, for easy connection to your camcorder or second VCR. This makes for quick connection without having to reconfigure your home entertainment center.

As a VCR, it has a number of features to keep both the videographer and home-theater enthusiasts happy. The VC-S100U can record and play hi-fi stereo and it has a built-in multi-channel TV sound decoder, which allows you to record stereo or separate audio program broadcasts. It’s got two nice features aimed at reducing video noise; both are designed to work while playing back a tape. By pressing the 3D-DNR button, the VC-S100U automatically detects and reduces picture noise from old or well-used tapes. It also adjusts the brightness and improves the overall image of haggard tapes. The blue screen noise elimination turns the screen blue and mutes the volume when it detects any white noise.

The VC-S100U also comes with all of the basic features that we’ve come to expect in VCRs. It has a universal remote that you can easily set up to work with your other components, a 1-year programmable timer and a still and slow-frame advance feature. It’s equipped with its own digital program search system that marks tapes with an index signal when you record a program. Later when you view the tape, you can quickly search ahead to the beginning of a new program. It also features an instant replay function that rewinds 20 seconds at a time until you find what you want to see; and a skip search that goes quickly forward for 30 seconds. Another cool little playback feature is the automatic playback that plays a section of the tape over and over until you tell it to stop. Nice feature if you’re trying to see exactly what happened in a scene.

The playback features of the VC-S100U S-VHS VCR dwarf the number of editing features this deck offers. Nonetheless, the VC-S100U does what it promises: it records and plays very good S-VHS pictures at a very affordable price. Though videographers looking to do heavy-duty editing would be disappointed, those who want a quality S-VHS deck for dubbing tapes and watching movies will be pleased with what they get for their money.