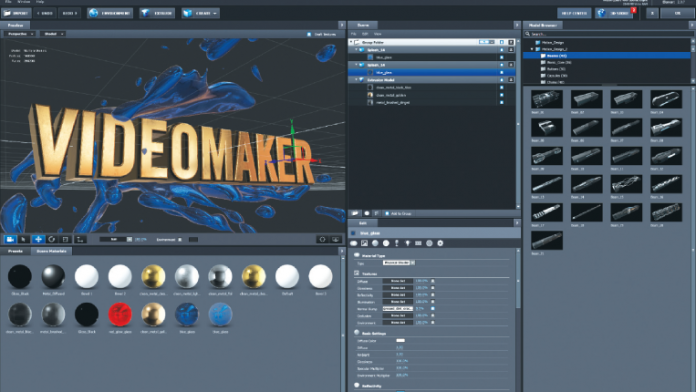 Have you ever wanted to create amazing 3D objects, such as animated logos or a fighter jet blasting past your actors? What if you don’t have the large amount of time it takes to learn a complicated 3D program? Don’t worry, Video Copilot will be your wingman. Their revolutionary 3D plug-in for Adobe After Effects can save you time and up your game.

The Element 3D V2 plugin created by Video Copilot acts like a standalone program but is integrated inside After Effects so you can leverage the power of both. This plugin allows you to add 3D objects to your live action footage or create impressive motion graphics, making After Effects more powerful than ever.

Element 3D V2 quickly turns text into 3D with plenty of animation capabilities. You have a selection of textures to give your text different looks, such as metallic gold. You can even create complicated bevels and bend and deform to enhance your text so it rivals studio logo opens. If you’re not sure what look you are going for, be sure to check out the preset looks and Element 3D will do all the work for you. If your logo is more than text, you can also create 3D objects using mask shapes in After Effects by extruding them in Element 3D.


Video Copilot provides top notch training to help you through the confusion so you can hit the ground running.

To start, you can create basic objects such as spheres or cubes, but the Element 3D plug-in comes with some 3D models and Video Copilot offers more for sale in packages. For example, their Jet Strike package has a bunch of highly detailed military and commercial jets. These will definitely come in handy for your Iron Eagle 7 film. For custom designs, you can import 3D objects, known as OBJ or CD4 files. OBJ is a universal 3D model format whereas CD4 files are from Cinema 4D.

Say goodbye to cheesy looking 3D. The textures that come with the plug-in truly are a top feature because they are extremely detailed and enhance the surface of your text and objects. Plus, they are just downright cool looking. Simply drag and drop the texture you desire onto any section of your object. If you want to access more advanced texture materials such as concrete, metal and wood, be sure to check out Video Copilot’s Pro Shaders 2.

Animating a 3D model is easy to do as well. You can now combine 3D models into groups so you can move the object or individual parts of it by selecting what you would like to change. For example, if you wanted a car to move you could rotate just the four wheels and move the whole car any direction you want. The ability to group your files also makes it much easier to organize your projects than in past versions.

Element 3D V2 can also create shadows for your 3D objects. This is an appreciated addition since the last version didn’t offer this capability and made adding shadows difficult. This helps add a layer of realism to your project, plus the shadows also interact with other nearby objects. In addition to shadows, you can also add reflections to your surface area. To kick it up a notch, you can add reflections to the neighboring objects as well.

A fun way to give text and objects a futuristic look is to turn them into a wireframe. You can control wireframe settings on individual materials and choose to make it just a wireframe or a wireframe mesh on top of your material. This is perfect for user interface designs and head-up displays found in fighter jets and armored exoskeleton suits worn by rich billionaire superheroes.

You can now bend, twist and add noise to your 3D geometry. Your 3D text and objects no longer have to be flat. You can now bend your text up so it looks like a smiley face or slightly bend it around a globe if you are going for a movie studio look. This is extremely easy to do, and the Element 3D V2 user interface renders quickly which gives you a high quality look at what you are altering.

This plug-in might feel a little daunting once you start poking around. Video Copilot provides top notch training to help you through the confusion so you can hit the ground running. The tutorials created by Video Copilot’s owner, Andrew Cramer, teach you how to create high end content — plus, his humor is a nice addition. His tutorials teach you how to make high end Hollywood-looking projects, which is probably why he has worked on big name projects such as the main title of Star Trek Into Darkness. By the way, the Element 3D plug-in was used to create that title sequence.

Although Element 3D V2 is just a plug-in, it offers an impressive number of features and capabilities. You can chose to ignore these features and still crank out great stuff. If you want to delve deeper into the more advanced features, it is easy to do with Video Copilot’s free training.

Mind blowing 3D is available and easier to achieve than ever. Combining the power of After Effects and this plug-in opens up a whole new set of possibilities for cool things you can create. Element 3D V2 is a must have plugin that offers top notch results fast and easy so you can focus on doing what you love most — creating cool stuff.

Operating System: Windows 7 SP1 and Up / Mac 10.7 and up
Required software: After Effects CS5 and up
Graphics / VRAM: Nvidia and ATI supported with at least 512MBs of VRAM   (full list of cards: https://docs.google.com/a/lonepeakproductions.com/document/d/1kqQP_Okzn_PEJsn0_CstMJUKyXw3VUJPz9-zX85dDag/pub )
License restrictions: Single license can be installed on one workstation computer and one personal laptop

Stephen Smith is an award-winning producer and editor for Lone Peak Productions.