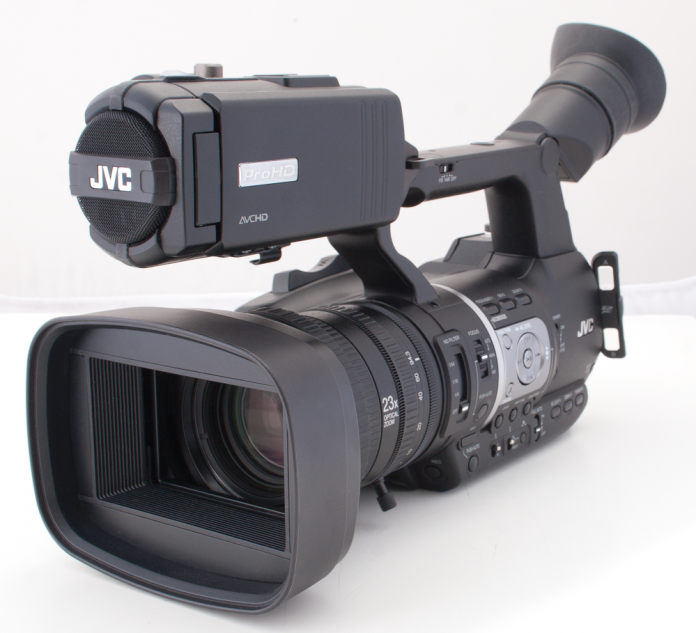 If recent trends in cell phone technology have taught us anything, it’s that people want convenience. The convenience of finding recommendations for a good place to eat, watching a movie to pass the time, and for a select few, to even solve differential equations all on a device that’s small enough to fit in a pocket. Interestingly enough, the same can also be said about camcorders. While large sensor camcorders with interchangeable lenses have produced some of the most breathtaking images for years, setting them up takes a lot of time, a lot of data, and a lot of money. That’s where the JVC GY-HM600 comes in. By having plenty of quick access controls, multiple recording formats, a 23x zoom, and a small stature, JVC is giving filmmakers the ability to capture great images no matter what the situation may be. However, unlike other run-and-gun style camcorders, JVC has found a way to not only produce an image that compares to large sensor camcorders, but to do so at a price that most news stations, live event shooters, and even hobbyists can afford. 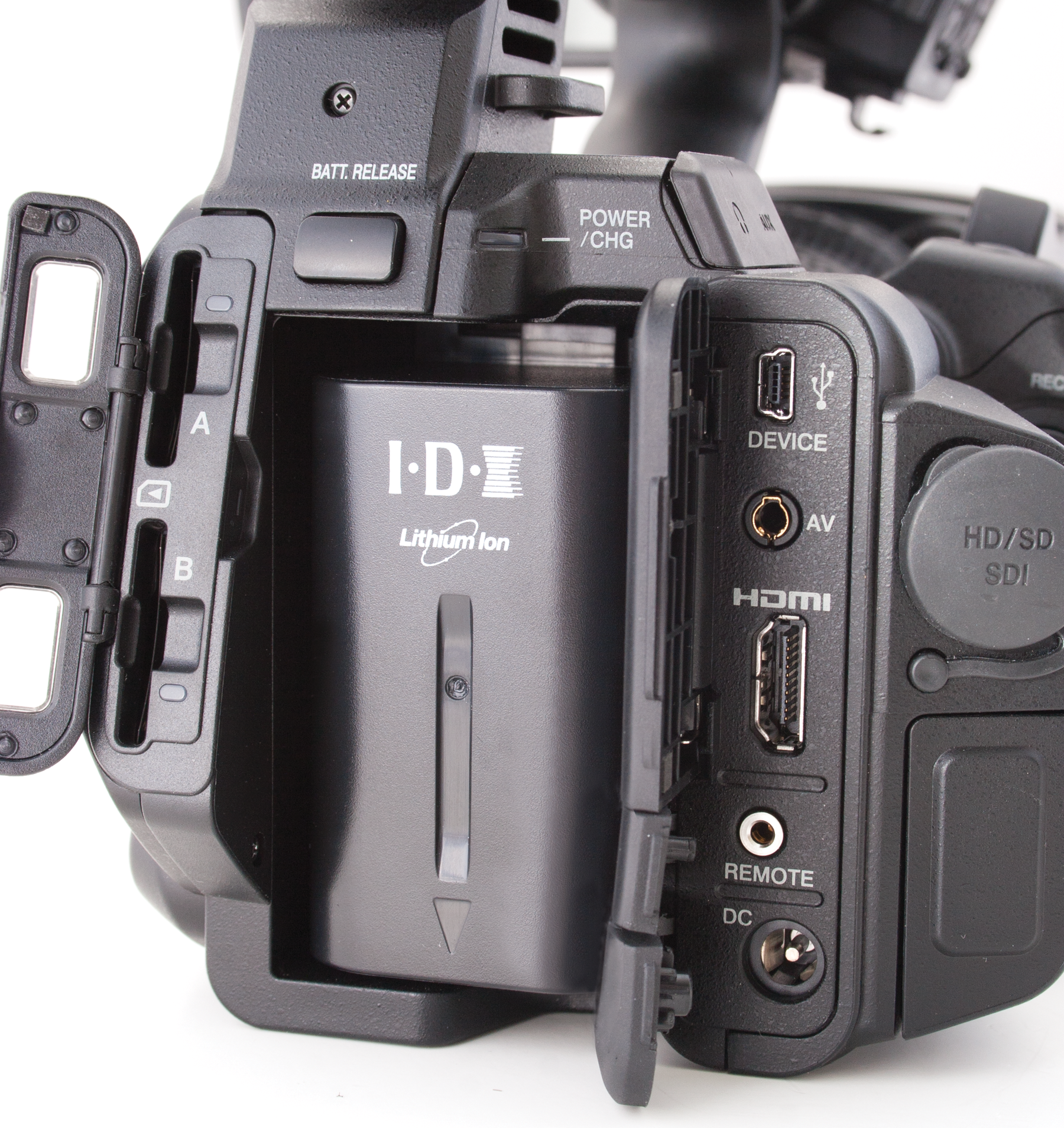 A Plethora of File Formats

When JVC designed the GY-HM600 and its sibling, the GY-HM650, there was no doubt that they had news gathering and on-the-fly productions in mind. They designed both camcorders with the ability to capture footage at just about every resolution imaginable from 1920 x 1080 pixels all the way down to one-fourth HD, or 480 x 270 pixels for easier to share video. Better still, JVC also had the forethought to include two SDHC/SDXC slots into each camcorder. This not only allows for the possibility of more recording time, it also allows a shooter to record a simultaneous backup to the second card. If that’s not good enough, it’s even possible to record one format on the first SD card and an entirely different format on the second SD card. This means that news stations that play their footage on the Web and over the airwaves will have the resolution they need right away without having to wait for transcodes to complete.

Speaking of formats                , JVC also included the ability to record in  multiple formats  such as MOV, MP4, and AVCHD. This means that no matter what format you prefer to work in, JVC likely has you covered. Most notably, the MOV version that JVC uses is ready for use in Final Cut Pro without having to transcode. Though that may not sound like a huge feature on the surface, it can be the difference between getting a segment on the air or having to scrap it entirely.

The ability to choose recording formats is great, but no camcorder can be great without first having a great sensor. Like most fixed-lens camcorders, JVC has three ?-inch CMOS sensors. Unlike many fixed-lens camcorders though, it has one of the world’s fastest camcorder processors using its Falconbrid technology so you’ll get more flexibility in frame rates, a higher bitrate file than usual, and great color reproduction in your footage. Unfortunately, the Falconbrid processor doesn’t do much to help with the  rolling shutter  issues that CMOS camcorders face. In fact, in our tests, we felt that the rolling shutter was more noticeable than comparable camcorders in the same neighborhood. 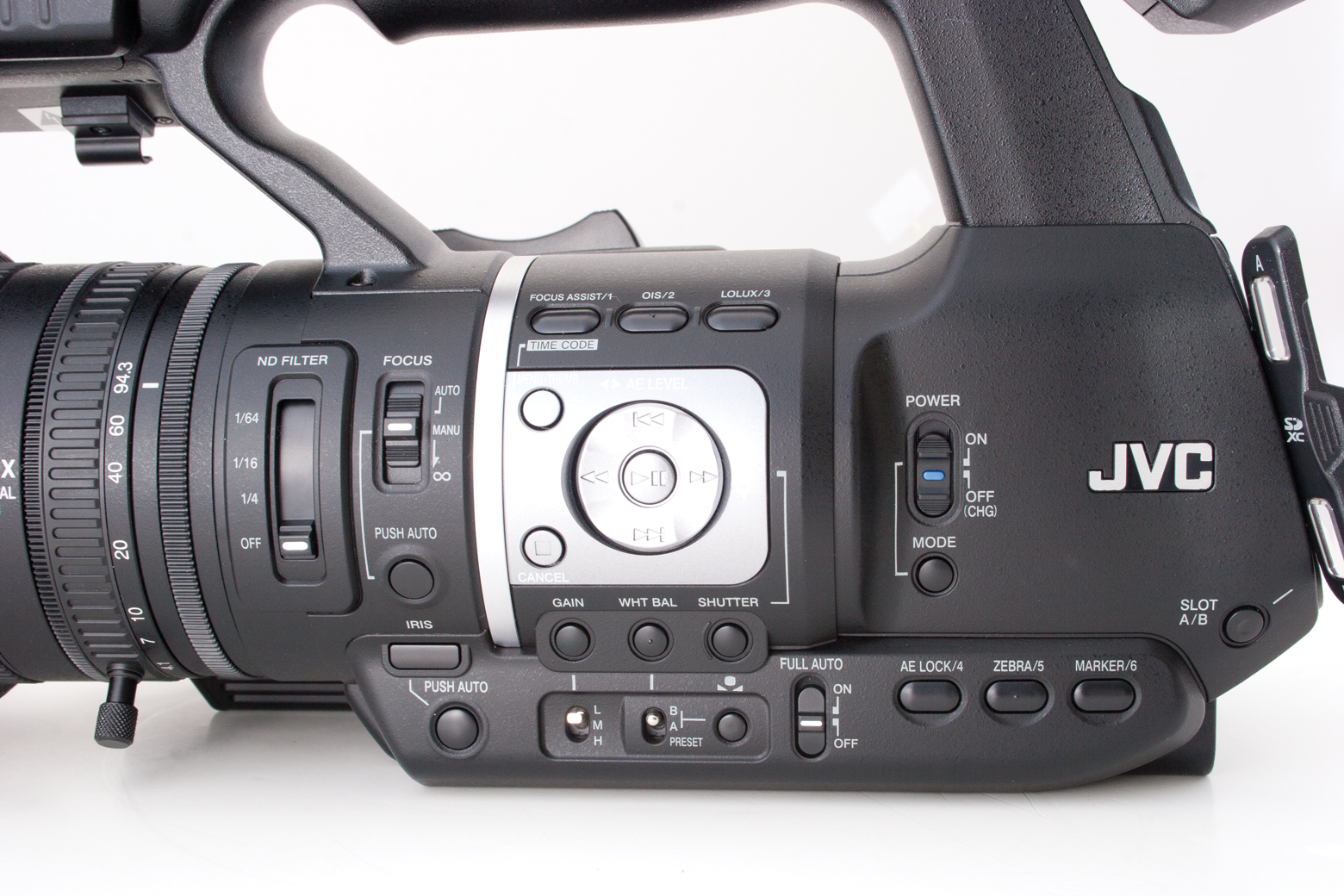 A Swiss Army Knife of Functionality

What JVC may lack in its sensor, it more than makes up for in functionality. One of the most impressive features the GY-HM600 has is its ability to zoom up to 23x. To have an equivalent zoom on a DSLR or film camcorder would require a lens so big that it would need its own tripod. In our tests, we were actually able to go from a shot of the entire night sky all the way to a shot in which the moon filled the entire frame – a useful feature for anyone using the camcorder for live productions.

JVC also made controlling exposure easy. They include  a 4-position ND filter that can go from ¼ up to 1/32 on the left side of the camcorder. The f-stop range may be set as low as f/1.6, which makes it super handy in low light situations. Refreshingly, they also designed the lens with focus, zoom, and iris rings for minute manual control. In practice, we found that the iris and focus rings had a noticeable lag especially when doing whip zooms. However, under normal shooting circumstances, this lag is unlikely to be a problem. For even more control over exposure, JVC places the gain selector (which is assignable in the menu system of the camcorder), on the left side of the camcorder. We did find it curious that JVC offered a -6db gain option, especially since it didn’t seem to improve the graininess of the image to any measurable degree. However, it was a convenient way to avoid overexposed images. Lastly, we weren’t initially thrilled to find out that the playback buttons served a dual purpose as the shutter speed selector but we were pleased with how responsive the buttons proved to be. 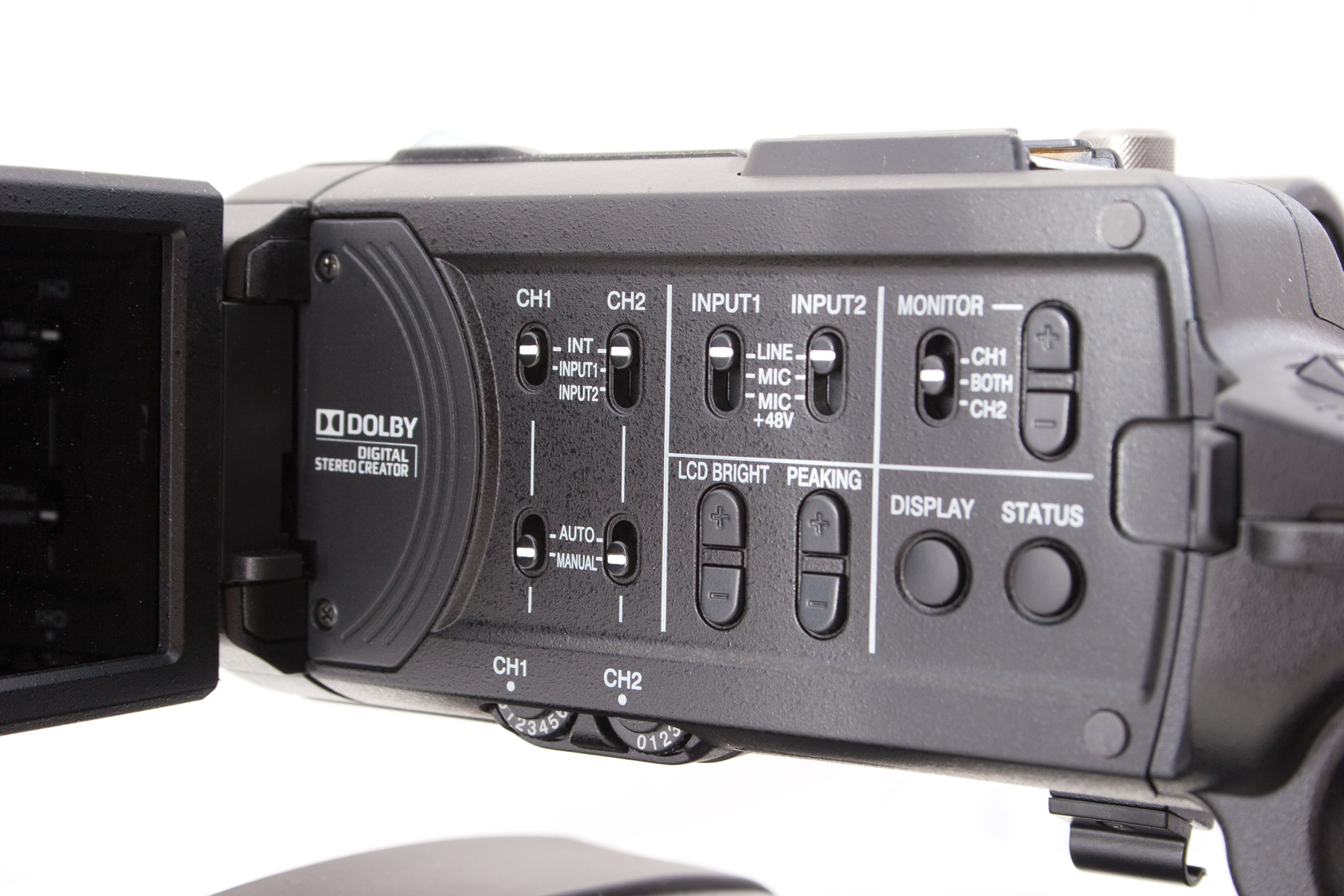 Speaking of buttons, JVC put so many of them on the GY-HM600 that it’s almost a miracle of science as to how they managed to fit them all onto such a small package. The GY-HM600 has buttons for AE Lock, Zebra bars, making markers, white balance, Optical Image Stabilizer, Focus Assist tools, and of course, for quickly putting the camcorder into Full Auto. The only real complaint we had was that the audio options were all behind the LCD screen on the front of the camcorder which made them inconvenient to get to when using the EVF. What was lost by putting the buttons in such an odd spot was gained by having so many external audio controls. The GY-HM600 has a button for Auto or Manual audio levels, phantom power, which audio feeds to which channel in the headphones, and independent volume knobs for each channel of audio, which made manipulating audio easy.

Of course, no camcorder deserves to be called professional without a solid selection of inputs and outputs and the GY-HM600 has these in spades. The camcorder has an SDI and HDMI output for external video monitors, ports for AV, USB, and of course two XLR inputs for connecting and powering microphones. In fact, that’s what makes this camcorder so great. Almost every setting can be changed with the touch of a button rather than by digging through complex menu systems. Even better yet, there is no need to purchase costly adapters just to make monitors or microphones work. Everything is provided for you – and in a compact size to boot. With all of these things in mind, it’s easy to see why the GY-HM600 is a worthy companion for any run-and-gun style shooter.