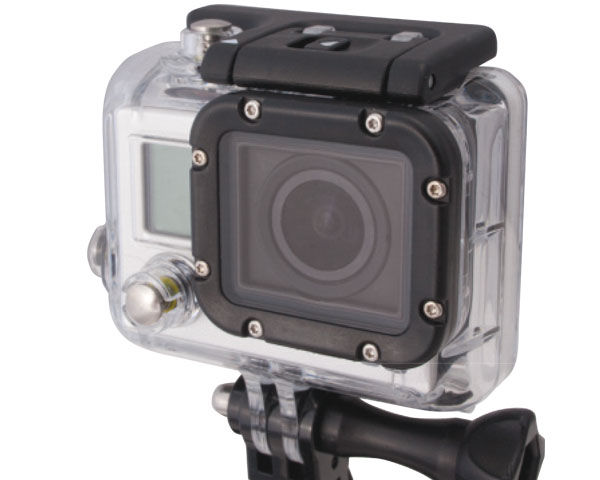 From base jumping off a mile high cliff to home movies of your messy two-year-old there's a feature of the GoPro HERO3: Black Edition for everyone. Affordable and amazingly compact, this camera can go with you anywhere and mount easily in a variety of ways. Compared to the White and Silver HERO3 models released in October 2012, the Black Edition is the top performer, and a giant step up from the HD HERO2 model.

Designed for professional use, yet with the beginner videographer in mind, this little device is easily learned, quickly mastered and ready for a multitude of applications. Whether it is your first camera, your second or just another addition to your arsenal of equipment, the HERO3: Black Edition will fit well in anybody's gear bag – or pocket.

The HERO3 comes in classic rectangular GoPro packaging. A cube of hard, see-through plastic surrounds the camera, boldly showing off its small design, futuristic flat lens and included Wi-Fi Remote. Neatly tucked underneath are the components: a small 1050mAh rechargeable lithium-ion battery and various adhesive mounts to stick the camera in creative places. Right off the bat, this camera feels different.

Being a long-time user of the previous GoPro models, this camera feels familiar on the outside but there are significant improvements to the brains of this brand new Black Edition. On the outside of the casing, all the mounts are the same, which is great news for HD HERO or HD HERO2 owners who have extra accessories lying around. The backdoor to the waterproof case fits on the same way as all GoPro models. Additionally, the HERO3 is mounted in the same align-and-tighten fashion as previous versions, which is good news that most older accessories are compatible. The LCD BacPac and Battery BacPac from HERO2 even work as well.

Slight differences in the waterproof housing of the 197-foot depth rated GoPro HERO3 include the new flat lens that helps underwater shots stay in focus. Plus, the top of the case sports a newly designed safety slider lock to prevent the accidental release and opening of the case underwater. GoPro also added an exclusive Wi-Fi button on the side of the HERO3 to shortcut access to Wi-Fi settings. The Wi-Fi enabled camera can be controlled by the included remote or even by a smartphone or tablet.

How does it perform?

An immense amount of hype is circulating about the HERO3: Black Edition and its assorted capabilities. Luckily, we've put it to the test to give it to you straight. The biggest wow factor for most video-minded people is the 4k resolution of this tiny camera. The 4k frame size is almost four times the size of normal high definition 1920×1080 pixels. The GoPro HERO3: Black Edition has two 4k modes that have slightly varied aspect ratios and frame rates. However, here's the catch: the HERO3: Black Edition can only record 4k at 15 frames per second (fps) and 4k Cin at 12fps, which is only really useful for static non-moving shots. The human eye can process 10 to 12 separate images per second, so a frame rate of 12 or 15 is only slightly above that, making the video look a bit choppy if used on a subject or scene with a lot of motion. On the plus side, the 4k frame size is so large you can pull usable screenshots from the footage to use as stand-alone photos.

If you're still looking for better quality than 1080p, the HERO3: Black Edition offers two modes that are still almost double in size. Setting the camera to 2.7k you can shoot in 24fps or 30fps, which are the standard frame rates for film and television. The standard 24fps and 30fps are available at the lower resolutions in addition to some fancy high frame rates. For mountain biking and other shots where a 4:3 aspect ratio is suitable the 48fps at 1440p feature is great to get more of a squared frame. In the widescreen modes, the HERO3: Black Edition shoots 60fps at 1080p full HD. The most striking high definition frame rate is in the 720p mode. The HERO3: Black Edition can capture rates as great as 120 frames per second! GoPro CineForm Studio, a free editing software from GoPro, can be used to conform the 120fps to 24fps, showing off real speed moments slowed down five times. After testing the 120fps feature out at a skatepark, we were quite impressed by the mesmerizing fluidity of the normally fast action playing back in breathtaking slow-motion.

With the HERO3: Black Edition, you're not just getting an action video camera, but a great option for capturing stills as well. You'll never miss a shot with a wide selection of time-lapse settings and the speedy 12MP photo bursts with as many as 30 photos a second. Pair the immense video and photo potential of the HERO3: Black Edition with the integrated Wi-Fi and waterproof remote and capture all the action, even when you are the subject in front of the camera!

The camera can be controlled completely by the wireless and waterproof keychain remote. Remember to turn the Wi-Fi off when not in use or the battery will drain quickly. Mounting the camera in wild places such as on top of a 30-foot pole, or shooting from the bottom of the swimming pool is a cinch with the Wi-Fi Remote. Not only can you see what you're recording on your smartphone or tablet, you can also change recording modes and take video or photo bursts with just the touch of the button from as far as 600 feet away. Capable of controlling up to 50 other GoPro cameras at once, the possibilities with the Wi-Fi Remote are endless.

What You May Not Have Heard

High resolutions and frame rates are impressive, but where the HERO3: Black Edition really shines is in the less discussed subtle improvements from previous models. After testing this camera side by side with the HD Hero2, it is apparent that three major features have been significantly improved: the in-camera audio, the low light capabilities, and the internal menu usability.

Reviewing the footage from after the comparison test, we immediately noticed the audio differences between the two cameras. Even without the housing, the HD HERO2 sounded tinny and faint, but the HERO3: Black Edition sounded surprisingly clear, somewhat usable and comparable to the on-camera audio of a DSLR. Adding the waterproof housings muffles the mics on both cameras a bit more. An optional 1/8-inch (3.5mm) stereo mic adapter can be purchased separately for the HERO3: Black Edition to utilize a superior quality mic. Included with the HERO3: Black Edition is a non-waterproof backdoor with openings for improved audio while using the camera in less than 100 miles per hour winds. GoPro additionally improved the wind noise reduction algorithm, which translates to less audio distortion when traveling at high speeds or on a windy day.

Lastly, the most overlooked feature that has been improved in the HERO3 is the menu. Navigating a camera with only two buttons is not easy, yet somehow GoPro continues to improve it with every new release. The manual for the HERO3 is not included in the package so a lot of users do not take the time to go online to read it. After reading through the entire manual, we found a subtle but handy feature that makes navigating the menu notably efficient. In order to exit the settings menu on the HD HERO2 you had to repeatedly click the Mode button until you found "EXIT." Heaven forbid you missed it, and you'd have to cycle through all the options hoping you would not skip it again. While under the hurried pressure of some shooting situations, this feature on HD HERO2 was really frustrating and difficult to accomplish. Now, with the improved HERO3, the settings menu allows the user to hold the record button and swiftly jump out of the menu and back to camera mode, ready to go.

It's a camera like the HERO3 that excites our passion for creating videos. It's a camera that pushes the boundaries of technology, offers a variety of useful features, and helps us make our films more creative by being portable and able to mount essentially anywhere. This tiny HERO3: Black Edition may not shoot footage like a cinema camera, it may not take photos like a DLSR, and it may not have all the bells and whistles of a full-sized camcorder, but it doesn't need to. The GoPro HERO3: Black Edition is in a class of it's own, pulling features from all shapes and sizes of cameras and packing it into less than two cubic inches. Adding durability and waterproofing to the mix, plus hundreds of accessory combinations, the HERO3: Black Edition is an adventure that every video enthusiast should explore.

The tiny GoPro HERO3 packs a punch for beginners to professionals, one that is currently unrivaled at its price point by any other action camera.

Stephen Diaz is an independent filmmaker and professional blogger.