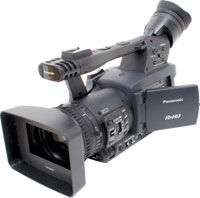 It’s been about three years since Panasonic Broadcast released the acclaimed AG-HVX200 and the P2 workflow to the world. At the time going tapeless was still considered a bold gamble, filled with unknown risks such as archiving uncertainty and limited record times. In fact, the HVX200 still came with a DV tape drive, just in case.

Fast forward to this year and Panasonic has released the AG-HPX170, a handheld professional camcorder that’s ditched the DV tape transport and embraced memory recording on to P2 only. Panasonic is betting that the concerns of 2005 have been addressed and it’s time to move forward to a bright new P2 based future.

Looking over the AG-HPX170

The camcorder itself has a bulldog-like squatness reminiscent of the AG-DVX100 and HVX200 that typifies Panasonic’s professional handheld series. While it does give you a bit of wrist strain after about an hour of shooting, the squat form factor leaves plenty of room for lots of manual controls, ports and connectors.

The lens is a 13x Leica Dicomar, with a wide angle of 28mm and a telephoto reach of 368mm (35mm equivalent). This is a great trend that Were happy more manufacturers are getting on board with. Expanding the wide end of the lens gives you much more flexibility in your compositions. The filter size is 72mm.

The HPX170 uses three 1/3″ progressive scan 16:9 CCDs as imagers, giving nice color reproduction. These imagers coupled with a new digital signal processor (DSP), that perform 14-bit A/D conversion, and scan at 1080p60 makes sure the camcorder has a lot of latitude for the image before it gets compressed down to DVCPRO HD.

Coming from Panasonic’s Professional line the HPX170 has all the manual controls that you would expect, nicely laid out and conveniently placed. The lens controls have a free rotating ring for focus, and a zoom control. The iris is controlled one of two ways, primarily as a small rotating knob near the bottom left of the camcorder, or with a flip of a switch you can use the focus ring as an iris control (locking the focus in the process).

Picture controls such as white balance, gain, and the ND filters (1/4, 1/16, 1/64) are all represented with physical switches that click satisfyingly into place, letting you know in a tactile fashion whether they’ve been switched or not. It sounds like a minor thing, but being able to use the functionality of your camcorder by feel alone goes a long way in the field, when your eyes need to be focused on the image.

Behind the LCD panel you’ll find an array of buttons, controlling some of the LCD features, the shutter, the color bar generator, and most of the audio input and phantom power controls. Just underneath the LCD in the rear of the HPX170 lie the manual audio level controls that are about 3/4 covered by a clear plastic guard. This is the only quibble I have with the layout of the manual controls, in that the plastic guard does its job too well, making it difficult to adjust the audio dials for those like me, with relatively large fingers. Luckily it looks as if a small screwdriver is all that is needed to remove the guard completely.

One of the nice features you gain when stepping up to a pro level camcorder like the HPX170 is interoperability with other equipment via standard ports and jacks. This camcorder comes with two XLR connectors with phantom power and an HD-SDI connector to interface video with other pro broadcast gear. They’ve included component video out for analog signals, as well as a set of consumer RCA jacks for composite video and audio. There’s probably not a monitor out there that can’t be connected.

For a data-driven format like P2, interfacing with computers and hard drives is essential. Panasonic does its best for maximum compatibility by including both a six-pin FireWire connector, and a mini USB 2.0 connector on the HPX170. The HPX170 can even function as a “host” in FireWire mode, allowing you to hook up a FireWire hard drive directly to the camcorder (like the Maxell iVDR reviewed in this issue,/www.videomaker.com/article/14414) to offload footage to the hard disk without a computer.

The LCD on the HPX170 is a mixed bag. The actual resolution of the panel is poor compared to other camcorders in this price range, but what it lacks in resolution it makes up for in features. Standard pro-level LCD features like zebra stripes for exposure, and edge detail for focus are present, but there are a few surprises. One is the welcome addition of a waveform monitor and vectorscope to the display. Much more useful than a histogram, using these video engineering tools can let you see exactly how changes in lighting are adjusting the video signal. The other nice feature is an LCD flip option that allows you to flip the image in the LCD screen, so that you can use one of the several popular 35mm lens adapters on the market directly. (Due to the optical physics involved, all lens adapters invert the image recorded in the camera).

The viewfinder, which can be used concurrently with the LCD panel, is of average quality, but still far too small to accurately judge focus with. Although this is common to all viewfinders these days (I haven’t seen a good viewfinder since they stopped using tubes.)

The HPX170 records to P2 in the DVCPRO HD codec. This is a professional recording format with the distinction of starting off as tape based, and then moved directly across to digital. DVCPRO HD handles both 720p and 1080i/p formats, recording with 4:2:2 color sampling at a modest 6.7:1 compression ratio. What this means in practical terms is that both color rendition, and light compression make a very nice image that looks clean and is easy to edit with. The downside is that this results in a very high data rate, leading to relatively short record times.

The HPX170’s picture is also colored (literally) by an extensive scene file selection. These scene files are extremely tweakable allowing you to get just the image you want by adjusting color and gamma levels. There is a thriving community sharing these scene files, and you can have up to six different files “on deck” at any given time.

The actual horizontal resolution of the HPX170 is a little disappointing, coming in at a mere 650 lines. Other similarly priced camcorders come in between 800 and 1000. What this means is the HPX170 will tend to look a little less sharp than other camcorders in this range. Some people like this look as compared to the hyper-real sharpness of higher resolution video. I personally like sharpness so high I can cut myself on it, so this is a drawback for me.

Another nice feature that Panasonic added from their higher end pro line is Dynamic Range Stretching (DRS). This feature adds greatly to the picture quality of the HPX170 by allowing a higher contrast ratio in the picture than would normally be possible. Essentially the camcorder can combine different exposure settings into one picture. So you can have one exposure where the shadows look nice, and one exposure where the bright sky looks nice, and the camcorder can put them together for you into one nice looking shot.

When making the purchasing decision for any of Panasonic’s P2 line of camcorders it pays to make sure you know about the P2 workflow, and how it will impact you. The P2 card itself is a PC Card (form factor formerly known as ‘PCMCIA Card’) that contains several memory chips linked together to give the speed necessary to keep up with the high data rates of the DVCPRO HD format.

How much video you can fit on a card depends greatly on the shooting format you select. In 1080p24 for example, you will get about 16 minutes of video on your 16GB card; however, if you’re shooting in 720p24 you can fit up to 40 minutes of video on that same 16GB card. This kind of flexibility adds a little complexity to the situation, where you now have to factor in the amount of uninterrupted shooting time you need versus the amount of P2 media you can afford.

The key to getting the most benefit out of the P2 system is to realize that you need at least two cards, a computer and storage to make it work best. Because the HPX170 holds two cards at once, and the media is hot-swappable, once one card is full, simply eject it and give it to an assistant. While you’re continuing to record on the second card, the assistant is offloading the media from the first card onto a large hard drive. Once he’s done he re-formats the P2 card and returns it to you blank and swaps it for the second card you’re recording on. By repeating this process you can get unlimited recording time on two P2 cards throughout the day.

This obviously works best if you’re shooting relatively short bursts of material, and you have the luxury of an assistant, electricity and infrastructure of a normal studio or on-location shoot. So what if you’re doing long form shooting like interviews for a documentary, or don’t have time to swap cards back and forth during a run-and gun situation? There are alternatives to P2 cards that record directly onto a hard drive via the FireWire interface, such as Focus Enhancement’s FS-100, allowing you long record times in the field.

Once you get to editing, life gets a lot easier for P2 users. DVCPRO HD is a mature codec and is supported by all the major NLE players, and because it’s so lightly compressed, its very easy to edit with, even on older computers.

Panasonic’s AG-HPX170 is a formidable camcorder with great image quality and it’s easy to operate. The era of solid state recording is firmly here, DVCPRO HD is a fantastic format, and Panasonic is backing up its belief in the HPX170 by offering an astounding 5-year warranty for the model. However, the cost of P2 media and limited recording times continue to be an issue with the adoption of P2 outside the broadcast and indie cinema industry.

If you understand the trade-offs involved with P2, you’ll find the HPX170 is a serious professional camcorder at a bargain price.

Analog to DV Conversion: No

Other Digital Video Out: HD-SDI

Panasonic’s AG-HPX170 shows good color detail and has extensive picture customization options. The P2 based media, though, is still costly, and the tradeoff for great pictures is short record times.

View the Manual for the Panasonic AG-HPX170.