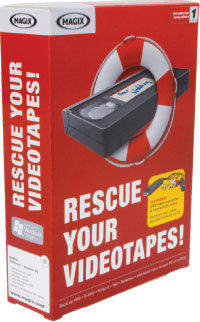 For most of us over the age of 20, memories of VCR recording are still stuck in the back of our brains. Over the years, we’ve all found some embarrassing childhood memories under a couch on some dusty videotape. The birthday with that invincible piata. The trip to the theme park when your brother fell off the ferris wheel. The soccer games where your brother would beat up the ref. We could go on, but two things are certain: the death of VHS is imminent, and some of those tapes are worth saving!

Comprised of a USB converter and Movies on DVD 7 burning software, Rescue Your Videotapes! made it very easy to transfer any analog or digital video source to PC. The USB converter looks like a Flash drive with four cables attached (S-Video and A/V composite). The analog-to-digital video capture device turns on when you plug it into the USB socket. Movies on DVD 7 provides additional editing and DVD support after capturing the analog footage.

Time to Put It Together

After we installed Movies on DVD 7, the first thing that stood out was how easy it actually was to capture. We took some old VHS tapes, along with an old trusty and rusty VCR, and began to rescue away! With the help of three tabs (Record, Edit and Burn), Movies on DVD 7 allows users to capture VHS, Video8, S-VHS, Hi8 and – that’s right – Betamax.

The Record tab allows users to duplicate CDs and DVDs. And just in case the need is there to save existing DVDs or just make some extra copies for the family, duplicating was as easy as two clicks! Just hit the CD/DVD Copy tab, and then click Copy in the pop-up menu. The Edit tab gives users the option of adding some additional finishing touches on captures with transitions, titles and effects. We liked the Move function, which changes the camera view and allows you to rotate it. The Burn tab has a variety of menu layouts, including animated, static, user-defined, TV show and HD.

For more specific needs, users can choose from three functions: CD/DVD Copy, Recording and Import File. CD/DVD Copy offers three options: Copy (CD, VCD/SVCD, miniDVD & DVD), Shrink (compresses and burns video files) and Analog (opens the USB device for capture). Recording lets editors choose between DV, Analog, Audio (mic, tape recorder, MiniDisc and record player – yes, vinyl!), as well as grab video files from video currently on the screen. Import loads available video files. We also liked the option to automatically edit our clips in the Task Menu, as well as the option to remove TV commercials for TV show DVDs. That being said, obviously Movies on DVD 7 is not the world’s most impressive editing software. For what it needs to be in this kit, it works very well. However, users hoping to take their DVDs even further will have to move on to a more advanced program.

With an average lifespan of about 15 years, all of our childhood memories captured on videotape may be in line for the much-needed facelift to DVD. The magnetic layer of VHS tapes generally slowly deteriorates over time, even in the best possible storage conditions. Watching VHS tapes diminishes their quality over time as well.

Overall, MAGIX Rescue Your Videotapes! is a great all-around package for doing just that – saving old and dying formats. It’s easy to use, quick to pick up and fun to work with. Videotape may be gone forever soon, and now is the time to save those memories.

Great package to save old and dying formats! Makes it easy, and it is fun too.