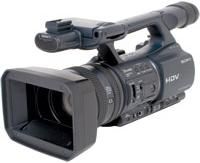 Costing $3,200, the HDR-FX1000 is Sony’s new version of the HDR-FX1. Sony has included three 1/3-inch ClearVid CMOS sensors instead of three CCDs, chopped off about an inch of the body, and added a new 20 x 29.5mm wide-angle G-Lens. With a few design and functional changes, the FX1000 is the ultimate amateur and beginning professional’s weapon of choice.

Weighting in at four pounds, nine ounces, the FX1000 feels easy to shoot with. It’s not too heavy, and it’s not too light. Everything is here. The FX1000 gives shooters multiple options for creating projects, making sure that they look great. Structurally, the three 1/3-inch ClearVid CMOS sensors strengthen the shooter’s ability to capture very detailed and crisp images.

The new 29.5mm wide-angle G-Lens with 20x optical zoom range eliminates the problems of shooting at a distance or at an extremely close range. There was some motor noise from the zoom, but it wasn’t recognizable during playback. We liked the 3.2-inch LCD screen that sits on top of the body, since its similar to the design of most pro-line cameras, making hand held and tracking shots easier. The LCD itself packs in a resolution of 921,000 pixels, which allows cinematographers a precise and crystal clear view of their videos. Even more precise capturing options are available with 3 manual rings: zoom, focus, and iris.

Mimicking the FX1, the playback functions are located under the LCD display, on the camera body. The mic and accessory shoe are just above the LCD. This time around, Sony has placed all input jacks on the back of the camera, including the DC in, headphone jack, HDMI, A/V out and FireWire. We thought this was a nice structural change from the location of the FX1’s cable inputs and outputs on the right side of the body.

The rocker zoom and Memory Stick sit on the right side on this model, with the on board functions and tape transport on the left. The design feels much more intuitive than that of the FX1, and it makes hand held operation much easier.

The great thing about a camera like the FX1000, is that it allows you to capture full HD 1920×1080 resolution video without having to purchase a $20,000 professional model. (The video is processed internally as 1920×1080, but due to the bitrate limitations of the HDV format, the video is still recorded at 1440×1080.) The FX1000 also provides a 1080/24p and 1080/30p Progressive Scan mode that enables nice looking film-like video. You can now secure HDV captures onto tape by way of a 2:3 pull-down, which records to tape at 60i. This divides each frame into two fields, which then reverts to its original state as you bring it into an editing program.

Not much changed with the Optical SteadyShot Image Stabilization System. It felt easy to shoot with and, even under extreme conditions, our shots still remained very steady.

Three built-in ND filters control the amount of light brought into each Image Sensor through the lens. With the ability to shoot at 1.5 lux, the FX1000 also gives more control over shooting in less-than-ideal lighting conditions. The FX1 was able to shoot only at 3 lux. We tested shooting in a very low light setting and were surprised at just how much adjustment and control he FX1000 gave us. The ability to shoot in such detrimental conditions has been all but lost in recent years and again, we found the options to improve and work around these issues to be helpful to any shooter. (Editor’s note: Lux is a standard measurement; the problem is that the testing methodology used by each manufacturer produces inconsistent results. There is a standard testing method as defined by the EIA, the problem is that real numbers do not make for sexy marketing.)

Conveniently, the mic input rests just below the LCD screen. In our audio test, we found that captured sound came through very clearly from anywhere up close; and even up to about eight feet away. Once we traveled further, things were a bit more garbled and started to lose their presence in the mix. With an external mic, we were able to monitor our audio to a T by adjusting the audio levels. The sound came through nice and crisp.

With the new FX1000, Sony has improved upon the already breath-taking FX1. It feels very professional, yet it is meant to be a consumer model. With so many options, every unique and individual nook and cranny can be met with precise customization and the freedom to capture most anything.

The Sony HDR-FX1000 is the ultimate consumer camera that thinks like a professional.