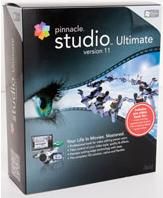 It never ceases to amaze us how powerful and full-featured video editing programs at the $100 price level have become. Case in point: Avid’s Pinnacle Studio Version 11.

The program sells in three versions: the core model (called simply Pinnacle Studio), which retails for $50; Pinnacle Studio Plus for $100; and Pinnacle Studio Ultimate, which lists for $130. From a marketing point of view, it’s always good to move prospective buyers from “should I buy?” to “which one should I buy,” which explains the three different versions. But to me, the choice seems awfully clear, after checking out the surprisingly high-end features included in the Ultimate Edition we tested.

On all of the versions, the Pinnacle Studio user interface, which supports both dual and widescreen monitors, is handsome and well laid-out. A handy feature when importing your media files into Pinnacle is a pair of buttons labeled “Show Video” and “Show Photos.” These will make only the media you’re currently working with visible. Just editing the slideshow portion of a video today? Then clear the “Show Video” button, and only photos will be visible. The Import Media will also automatically store videos and still photos in the directories you specify, making it much easier to find raw media again after it’s used in a production.

For background scores, all of the versions of Pinnacle Studio ship with a MIDI-based applet called “Scorefitter.” This application uses a library of MIDI tracks, from which it creates background music to fit the length you specify to fill a scene. It then asks the user to specify the style, song and version. With multiple default examples of each subset, it’s possible to customize a variety of tunes to fit a scene.

Scorefitter uses pre-recorded MIDI tracks, and the tunes tend to have the slightly clockwork sound often associated with all-MIDI-based recordings. (The more musically adept can always add their own personal elements on top of the score.) But for subtle background music under a montage and narration, this may be all you need.

As I mentioned, the Ultimate edition of Pinnacle Studio ships with several nifty plug-ins and features. One of the most versatile of these is a version of Bias Inc.’s (www.bias-inc.com) SoundSoap noise reduction program, which has been a mainstay in PC-based recording studios for several years. I’ve used this program and its big brother, SoundSoap Pro, on dozens and dozens of audio podcasts to clean up electrical hum from telephone recordings, and it has numerous other applications as well. If there’s noise from the camera’s motor audible on a dialogue track (which can often occur when using a camcorder’s built-in mic), or if you’re using a scratchy record for a scene’s source music, a quick wash in SoundSoap will do wonders to reduce hiss and scratches.

There are also several plug-ins for improving and changing the video quality. VitaScene by ProDAD (www.prodad.de), which retails for about $400 in its full-featured version, is included as a slightly stripped-down plug-in. VitaScene will add a variety of film looks, from sepia (for an old-time movie look) to warmed-up colors to an overly saturated, deliberately bleached-out effect. Many of these filters duplicate the sort of textures that a Hollywood cameraman armed with dozens of expensive filters can apply while a film is being shot. The advantage for videographers is the ability to see, once your raw footage is complete, which style works best, rather than committing yourself early on. There are several nifty filters especially designed for adding flashy motion overlays to otherwise static titles and to scene transitions.

Another powerful plug-in included with Pinnacle Ultimate is called MovingPicture, by StageTools (www.stagetools.com) . This is the same application used frequently by Ken Burns to add a sense of motion to the extensive number of still photos he uses in his documentaries.

MovingPicture works with still images of up to 8000×8000 pixels, to allow for as much detail as possible when closing in on a tight zoom. By using key frames and animation, it’s possible to preprogram all sorts of zooms, pans and rotating tilts to add some life to an otherwise static image. MovingPicture renders in 4:3, 16:9 and 4:3 letterboxed for 16:9 aspect ratios.

Speaking of rendering, Avid promises that Pinnacle Studio Version 11 will have up to twice the rendering speeds of their previous versions. And, these days, many videos head straight for the Web, once they are rendered. Anyone whose editing PC has a broadband connection will take full advantage of Pinnacle Studio’s Upload function, which will upload videos to Yahoo Video (video.search.yahoo.com) and Pinnacle’s own Studio Online site, with other online video repositories potentially available in future upgrades.

For delivering on disc, Pinnacle Studio Plus and Ultimate support high-definition formats. Their workflow allows for capture from HDV and most AVCHD camcorders (more support on the way), and they export the finished material in several high-definition formats. Pinnacle Studio Plus and Ultimate support HD DVD and will burn an AVCHD project onto a standard DVD in HD-DVD format, for use in an HD-DVD player.

Avid has been making software for the big boys since the late 1980s, when it started in a garage. Pinnacle Systems, acquired by Avid two years ago, puts some awfully powerful features into a package any garage-based videographer can afford. That’s something editors can appreciate.

For its strong lineup of video and audio plug-ins alone, Pinnacle Studio Ultimate packs a lot of bang for the buck.