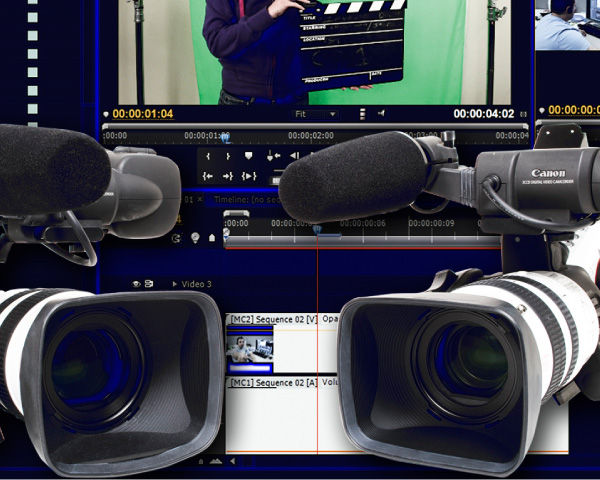 Multicam editing is perfect for producing video at live events, such as wedding, sporting events, recitals, graduations, plays, etc. Wherever there’s an opportunity to shoot a lot of footage in one continuous flow, and the event is rather large, (thus the need of multiple cameras to get good coverage), or when you simply have more than one camera at your disposal, multicam editing is ideal. Multi-cam editing can save you a great amount of time by running through the video in real-time and making your edits as you go. 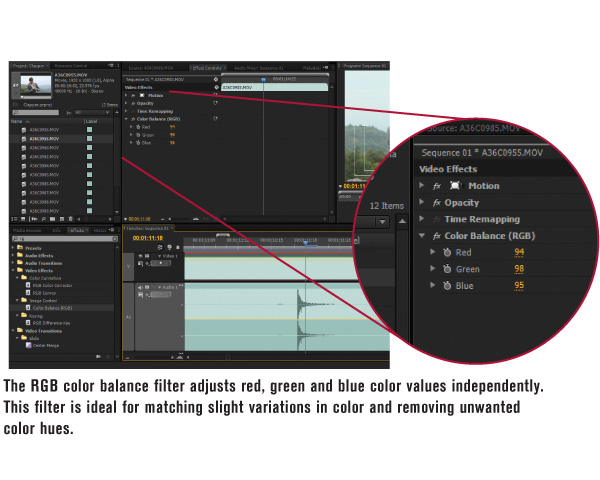 Often times the footage you’re editing is shot on different cameras or perhaps there’s a slight difference in the colors between video footage from one camera compared to the other. White balance issues are very common. Usually you can spot this problem fairly quickly if the white balance is significantly off. Other times you may need to compare footage where, ideally a white object is in the frame, like a white tee shirt or even better a white bounce card. Compare the footage and see if the white object appears to be more blue or orange in either footage reels. This will tell you if the white balance is off between cameras. There are several remedies to fix the issue. For example if camera B’s footage has a blueish tint to it, you could use a color filter and drop the Blue level slightly until the blue tint is gone. The same technique would apply for footage that has a warm tone. Simply apply a color balance filter to the footage and drop down the Red level until the red tint disappears. Most video editing software suites have an RGB color balance filter that lets you adjust these values independently. Make sure to observe each camera’s footage carefully and ideally against the same object under the same lighting conditions (this is where running a few seconds of a white bounce board at the beginning of a shoot is especially helpful). 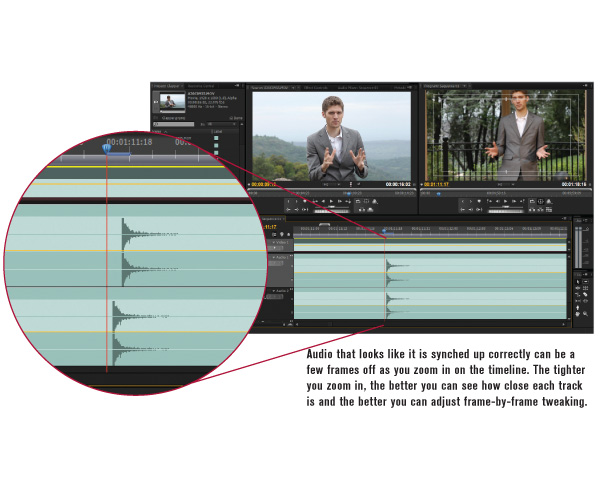 Another common problem nearly every multicam editor runs across is syncing multiple clips so that the audio syncs up nicely. This can be the most tedious work, even more challenging than the actual editing. The trick is to try to find a area of the video where each camera’s audio waveform experiences a significant volume spike. At the beginning of a production, this could be at a point where a stage hand taps the mic to test that it’s working. Looking at all the wave forms, visually align the spike in each track as best you can. Play back the clips in real-time and listen to see if the audio is in sync. You should not hear a doubling (echo) effect. It should sound only as if a single track is playing back. Most likely, you won’t get accurate sync on your first try. If you do, consider yourself one of the greatest multi-cam editors of all time. OK, maybe you were just lucky. If you’re like the rest of us, you’re going to need to roll up your sleeves and make some adjustments.

First, zoom in on the time line until your view is as magnified as possible. This usually puts your timeline representing each marker as one single video frame (1/30th a second for most editors). Now you can use your arrow keys on the keyboard to move the playback head one frame at a time. Look closely at your waveform again and see if the volume spikes are aligned before moving too far ahead. Sometimes, as you zoom in on the timeline, you see that they weren’t so closely aligned after all. Nudge the tracks again until they align once more. Play back at natural speed and listen closely. Still sounds echoed, but not as bad? Now it’s time to nudge the track forward or back and continue to playback to see if your sound is synchronized or not. It’s trial and error.

In an absolute pinch, some editors choose the best audio track and delete the others. This doesn’t give you the best audio mix, as it only represents audio from a single camera, but it does eliminate that doubled audio instantly. For this reason make sure to set up a principle audio camera that captures the house sound. In many cases, this camera will be in the back of the venue next to the audio mixer, perhaps even plugged into the audio mixer itself.

Always try to get the audio correct the first time as it gives you the best shot of getting a comprehensive representation of the event. If a video camera gets momentarily obstructed, you’ll always have the audio to lean on so that your viewers don’t lose out on the meaning of what is happening. Also, once you get it synched up, many timelines will let you lock the audio tracks so that you don’t accidentally nudge your clips out of sync again. 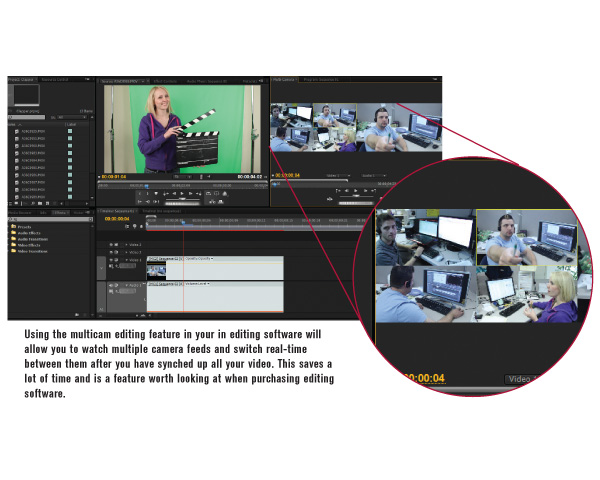 The heart and soul of multi-cam editing comes down to seeing each of your video tracks represented in a monitor so that you can see what camera to cut to when you want to make an edit. This feature splits your video monitor into 4 different smaller monitors so that you can see multiple camera views. Not all video editing software suites have this feature and some handle it in different manners, such as nesting multiple video timelines into a single timeline. You don’t have to have it to do multicam editing, as long as you have multiple tracks on the timeline you can get a multicam edit done, although it will take much longer. If Camera A is on the top video track and Camera B on the bottom track, you’ll only see Track A in a single monitor. Depending on your software, you can use the visibility toggle on the top track to quickly turn off Camera A and see Camera B’s footage, but only when the video playback is stopped. This requires that you review Camera A, then back up the footage and toggle off the track to review Camera B. Not nearly as easy as having a multi-cam viewing feature built in. But it works.

Keep One Eye Out For Cuts

With the program moving forward, look for opportunities to make your cuts. A simple cut from one camera angle to another can happen in many different areas, but the best cuts happen along moments of action. For example, Camera A shoots a medium shot of a school principal walking to the podium during a graduation ceremony to address the crowd. As he approaches the podium you could cut to Camera B as he turns to the crowd and show a medium close-up shot of the principal. Cutting on the action helps tie together the activities unfolding before the cameras. In a perfect world, you won’t make a cut just to hide a camera operator’s error, although that is a remedy. Look for important moments in the program or content of the video to make your edits. Just because you have four different camera angles, doesn’t mean you need to use them all. Typically, you’ll only need two angles to tell the story and the others will come in handy at rare moments. Choose wisely otherwise you’ll lose your audiences’ focus.

Dissolves and other effects that take time to transition should happen when these effects have time to unfold. So don’t do a dissolve on an action scene. Wait until an action is complete before starting a dissolve transition. It’s also important to only dissolve when both cameras are stationary. It’s best if both cameras are not panning, tilting or zooming. Make your transitions (and cuts for that matter) before any camera movements. This will make sure that the transition happens without the viewer taking notice of the effect. Camera operators ideally should have camera movements scripted so that you can edit as intended, however that’s not always the case. An easy way of communicating between camera ops while shooting is to use hand signals.

Multicam shooting is ideal for event shooting and with the right editing techniques applied you can produce just about anything from TV shows to Football games. To learn more, read our associated story, Multicam Shooting.

More advance editing packages, like Final Cut Pro have a clever auto white balancing tool in the 3 Way Color Correction filter (Effects> Video Filters> Color Correction> 3 Way Color Corrector) that allows you to use a color picker for the White color wheel. By selecting the color picker, you can choose a white object in the video which tells the software what white value to automatically correct. It then changes the values automatically removing the unwanted blue or orange tint. It’s a handy tool, but, ultimately you get the same effect with this filter or a RGB Color Balance filter.