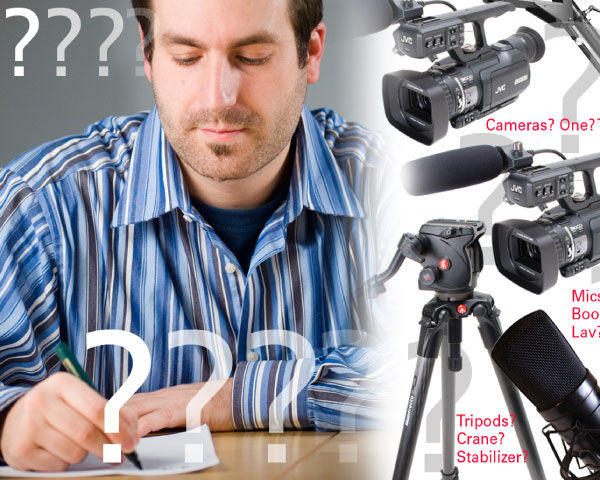 Every director should have the capacity for spontaneity, the ability to deal with the unexpected during a shoot. On-the-spot ingenuity, however, is not enough. You’ll greatly improve your chance of success – and save time, money and energy to boot – if you use the pre-production phase to craft a detailed plan of attack. If you take the time to create an accurate shot list, consider details like location availability, and fashion a shooting schedule accordingly, your shoot will go much faster and smoother – and your cast, crew and client will thank you for it.

Focus on the Project 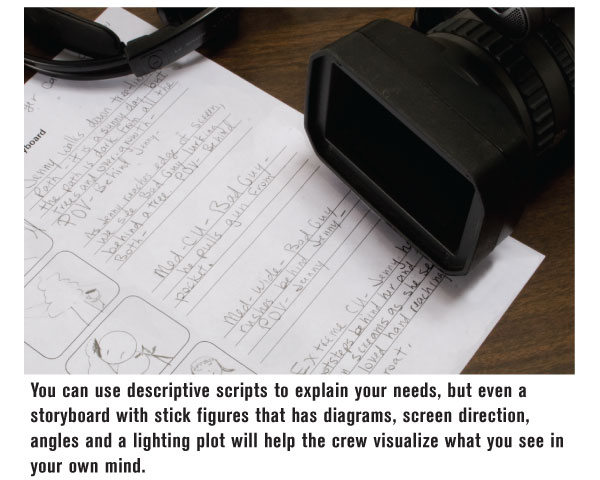 No exact formula exists for creating an effective shooting schedule. Every project has different parameters and considerations. For instance, you might need less time to shoot an hour-long corporate video, which consists of interviews and demonstrations in a studio, than you’ll need to shoot a four-minute music video that requires lip-synching and varied locations.

So, before plunging into a scheduling frenzy, you must first consider what footage you need in order to complete the project. Based on the client’s wishes, the purpose of the video, the intended audience and your own vision, you should prepare a shooting script, with helpful video cues and audio notes. Skip the fancy storyboards and focus instead on crafting a specific shot list – covering everything from establishing shots to cutaways – and, if necessary, a few lighting diagrams to ensure faster setups during the shoot.

This will also help you to determine your equipment needs. For example, if you’re shooting a promotional video for a construction company, you might want smooth shots that require a crane or dolly. Conversely, if you’re covering a concert from various angles, you’ll need multiple cameras, each equipped with a stabilizer.

To figure out how long it could take to shoot your entire script, consider that, on average, one page usually equals one minute on-screen. Of course, the exact timing depends on the exact nature of the project. Dialogue-heavy scenes, for instance, tend to go faster than those filled with action. From here, consider how long it might take to prepare each scene, including lighting, equipment and set arrangement. To ensure smooth set changes, consider shooting establishing shots first, followed by talent close-ups and cutaways.

The key is to be realistic, not overly ambitious. Though shorter schedules are often less expensive – requiring less money for renting equipment, purchasing food and compensating your cast and crew – it’s far better to overestimate how much time you’ll need than to rush the production. So, allow some extra room in the schedule, and be honest with your client about your expectations. 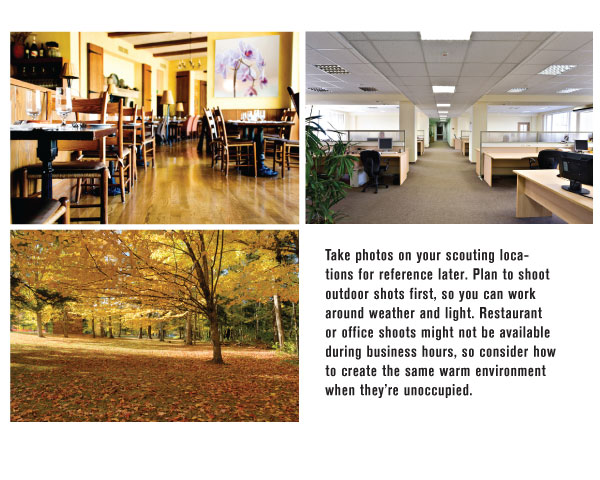 Next, make a list of all necessary locations – from studio sets to outdoor sites. If possible, visit the locations ahead of time and take photographs to reference when planning your shot list and shooting schedule. If that’s impossible – due to time constraints or other logistical reasons – contact someone who can provide you with footage, images or helpful details about each locale.

Once you determine what shots you’ll need, research the availability of each location and schedule the problematic ones first. For example, if you need to shoot inside a bar, you’ll probably have to do so earlier in the day, before the place opens to the public. Likewise, you should schedule exterior shots as early as possible, in case the weather turns ugly. Unless you’re shooting a corporate video, the opposite is usually true for an office building, which is typically available after regular business hours.

If you’re using multiple locations across a wide region, you’ll also need to figure out the distance between each location. If possible, you should organize the shooting schedule to allow for the least amount of driving time – by, for instance, combining close locales on the same day. Make sure, too, that you have written permission forms and permits for all locations; it’s no fun having to find an alternative site on the day of the shoot.

In addition, try to determine any potential problems that could affect the shoot at each location, such as difficult access, ambient light and sound, nearby traffic and the availability of parking, restrooms, water and electrical outlets. If necessary, have alternate locations in mind.

Whether you’re shooting a how-to video about gardening or a documentary about a nonprofit organization, you’ll surely have to deal with talent during your shoot. If so, figure out who appears in each shot – and whether there are any scheduling conflicts. As with locations, you don’t want to discover that someone’s not available on the day of the shoot. This is especially true for children and their guardians, who often follow strict guidelines about their education, shooting conditions and allotted set time.

When creating your shooting schedule, try to plan complicated scenes earlier in the day, before the talent gets fatigued – and don’t forget to plan for reasonable breaks, which you can stagger to save time. For example, while the cast breaks for a meal, you can use a smaller crew to shoot cutaways, such as exterior shots or tool close-ups. You must also allow enough time between shoots; even die-hard cast and crew members need their rest.

No matter how complicated a shoot seems, it will be infinitely easier if you plan a reasonable shooting schedule beforehand. You’ll be far less stressed – and so will your cast, crew and client – if you consider the project scope, location requirements and talent needs before the shoot. It’s also a good idea to exhaust troubleshooting concerns ahead of time. For instance, you should have alternate talent and locations in mind – just in case there’s a last-minute cancellation or weather concern.

Of course, these aren’t the only considerations. Sometimes, you have to schedule around special events, complex stunts, seasonal concerns and other unique issues. No matter how tedious planning might seem, having a plan and effectively communicating it to your cast, crew and client – will ensure that your shoot happens on time and on budget.