Many camcorders come equipped with a built-in light. Though it has more drawbacks than advantages, you can at least use it to throw some extra illumination at your subjects. Nonetheless, you can’t really "light" with it, as we think of lighting in this column. So let’s see how to squeeze the most functionality out of that tiny jet fighter canopy on the front of your camcorder, and then survey some options for upgrading your on-camera lighting.

First the bad news. Built-in camera lights suffer from three dire faults. First, the same battery that runs your camcorder powers them and they siphon off juice at an alarming rate. Just try shooting an indoor birthday party with that light always on and see how long your battery lasts.

Next, they’re a small nay, tiny light source. Small sources are highly directional, though the plastic housings on these units do diffuse the light a little. Directional light casts harsh shadows and, mounted just above the lens, achieves that deer-caught-in-the- headlights look that doesn’t do much for your subjects’ appearance. When you use small source spotlights on stands with other lights and control them with barn doors and such, they’re very useful instruments. But plunked onto the camcorder with no controls, they’re as crude as a ball bearing chiseled out of concrete.

Okay, but there it is on your camcorder and you want to use it. The good news is that built-in lights can help out in certain situations. You can use an on-camera light as an "obie," as classical Hollywood called them: a way to add just a bit of zing to a close-up face otherwise lit by available light. The camcorder light can add sparkle to eyes while it lifts the face maybe half an f-stop above the rest of the scene.

Can you soften that closeup by modifying your built-in light? Sure: it runs cool enough so it’s safe to tape a piece of old hanky or bed sheet over it for diffusion. The trouble is that spreading the beam reduces the already paltry output even further.

Unless you’re trying for a harsh documentary look, make sure that the face is not too much hotter than the rest of the scene. Study your external viewfinder very carefully. If the face is too bright, move back until the light moderates and then zoom in to re-frame the same closeup. If the light is too dim to help, move closer instead.

You can also use a camcorder light in really dark shooting situations, such as outdoors at night. Your camcorder is so sensitive that even the feeble light from its built-in unit will brighten a scene appreciably. The bottom line is, when you don’t have enough light for good illumination, a built-in unit can be a help, and hey, it’s better than nothing.

If you want more than "better than nothing," you’ll want to invest in a stand-alone unit that fits on the camcorder’s hot shoe or on a proprietary camera bracket.

The biggest single advantage of a camera light is power both inbound and outbound. Power in to the light is delivered from a separate dedicated battery, often worn on the belt (more on this later). This makes far more juice available to the unit while it takes the extra load off your camcorder battery. The usable light is far brighter than you can achieve with a built-in unit.

The second big advantage is control. You can vary the brightness, beam pattern, diffusion and color temperature to suit every shooting situation. However, no stand-alone light can do every job equally well, so different models are optimized for different circumstances. The Paglight C6 is a fine example of a camera-mounted spotlight. Very small and light and with a cool reinforced resin housing, it can be fitted with barn doors and two filters that flip into position singly or together. One changes the color temperature to daylight and the other diffuses the light beam. Like any professional spotlight, the C6 can be focused from spot to flood, to vary the beam pattern and/or the brightness. To further control light output, the unit uses 10-, 20-, and 30-watt lamps that can be switched even when hot because they live in interchangeable holders.

The model U-3 from Cool-Lux takes a much different approach. Instead of one light head, it has three, each individually switched. That way, you can turn on 35, 70 or 105 watts (at 12 volts) as needed. Though the light itself doesn’t focus, lamps are available with integral reflectors offering either 20 degree (spot) or 40 degree (flood) beam spread. By configuring your unit with, say two floods and a spot, you can achieve considerable flexibility. A single gel holder covering all three lights will accept a daylight conversion filter, diffusion, or anything else you like. The U-3 comes with several kinds of mount, including a stud for a separate stand (which we’ll talk about shortly).

Cool-Lux also goes in the dead-opposite direction with the SL3000, a small "broad" (horizontal floodlight) that can be camera-mounted. By itself it delivers a bright, medium-soft light with a horizontal beam spread that’s ideal for 16 x 9 shooting. Configured with a hood, it turns into an on-camera soft light. (As a dividend, the unit can be fitted with 120 volt halogen lamps for AC power.)

All of the units described here (and many others that are not) are available with power supplies and additional accessories. Stand-alone camera lights are available from these and other manufacturers of cinema/video lighting systems. (For sources, troll the invaluable mail order ads at the rear of this issue or Google around on the Web. – See our May 2003 issue for a complete feature on lighting products.)

Speaking of accessories, there are at least a few that you might consider.

First, think about mounting. The simplest units fit the camcorder hot shoe. However, that connection is sometimes needed for an external mike, if so, consider lights that offer alternative mounts. Some attach directly to the camcorder. Others use a brackets that screw into the camera’s tripod thread. The bracket has its own thread on the bottom, so that camera and light both attach to a tripod.

Now think about that deer-in-the-headlights effect. The farther to one side of the camera, the better the lighting, so look for brackets that offset the light as much as possible. Some lights, like the Cool-Lux U3, come with "studs," connectors for clamping the lamps atop light stands. With a unit like that and a feather-weight stand, you could tape a stand-up interview with the key light in standard studio position. If you’re really spiffy, a second on-camera unit can add fill. Outdoors, key with the sun and fill with the camera light. If you can’t move the light off the camera, try using the sun as a backlight to paint the hair and shoulders of your subject while the on-board light supplies a front key. A quick footnote: if you use a stand outdoors, be sure to weight its base. In a pinch, a gallon of supermarket drinking water with a string tying its handle to the light stand works just fine.

Next, consider a mini softbox: a fabric cube with black sides and a white front that fits over a camera-mounted spotlight. Photoflex makes a unit called the Action Dome ENG (a jargon acronym for "Electronic News Gathering"). With a white front somewhere around ten inches square, it’s hardly a studio softbox, but it diffuses the light amazingly well and it’s heat-proof enough to accept up to 250 watt lamps. By the way, you can get an accessory kit to mount the spot and Action Dome on a separate stand.

Last but no-way the least, think batteries. Lights take a lot of power, so count on accessorizing your costume by actually wearing their power supplies. Some batteries ride in belt pouches; others have shoulder straps; big honkers are worn as belts. All manufacturers sell matched power supplies (including 12-volt cigarette lighter adapters) and independent vendors also market systems for the most popular lights.

Since camera light batteries almost always use separate chargers, it’s easy to have a second battery charging while the first one is in use. For belt-and-suspenders types, three batteries are always good: one on the belt, one in the charger, and one in the bull pen.

As you can see, I did my best for the built-in light, but my heart wasn’t in it. For truly effective on-camera lighting, you need to invest in a separate unit. 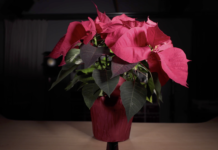 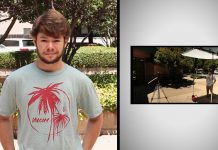