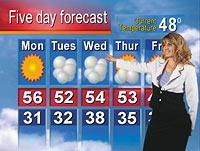 Whether it’s for a high school news program, a corporate promotional video, your church’s quarterly video newsletter or that community calendar show you’d like to do for public access, lighting for news and interviews can be complicated if you don’t know the rules. Fortunately, you can create great news lighting with very little effort, once you get the basics down. In this column, we will look at studio lighting for news sets. For the news set, the key is to light multiple talent and make it look like it’s seamless.

The pros use a variety of specialized lights and accessories to create pristine news lighting (see Tools of the Trade sidebar). If you have to create studio lighting without professional tools, don’t worry. As long as you use the techniques described below, you should be capable of creating great studio lighting setups with whatever tools you have at your disposal.

Any time you are setting up lighting for a news set, there are a couple of rules to follow. The number one rule: Bigger is softer, and when it comes to news, soft light is better. The goal is to bathe the entire news desk in soft, even light. Make the beam of a light wider and bigger and it creates a softer, smoother, more flattering look on human skin. By moving your lights closer to your talent and adding diffusion material, you can make them effectively bigger (in relation to your subject) and softer in quality.

You can soften your lights by adding a softbox (such as those made by Photoflex, Chimera or Lowel) to the front of the instrument. These soft boxes let you turn a hard-beamed 6-inch light into a 24- or 36-inch soft light. These big soft lights, placed 35 degrees in the air and at the five and seven o’clock positions, will create light that is soft, seamless and easy on the eyes. Because the lights are equal in intensity, they act as both key and fill for your two anchors.

If you don’t have access to a softbox, you can create a softer light by adding a piece of toughspun cloth (diffusion material) to the front of the light. Simply attach it to the barndoors with wooden clothespins. This technique, called diapering, is used in the film world to soften even the big "Mighty Mo" light, an enormous fresnel made by Mole-Richardson.

You should have a separate backlight for each talent so that you can separate each of them from the background and create a nice rim light around each of their heads and on their shoulders. Place each backlight so that it is directly opposite the key, yet at a higher angle, usually 45 to 60 degrees up. Make sure that you flag the light so that it does not create lens flare. When each talent holds a hand over the desk, he should only see one dark shadow cast from his individual backlight. If there are a number of shadows, the backlight for each talent will need to be flagged so that it only falls on the one person and doesn’t add to the overall lighting of the set.

Using the two major rules of the studio, the typical news setup is fairly easy. Let’s discuss lighting for a news crew of two anchors, one weather forecaster and a sports anchor. Let’s start with the news anchors. To begin, make sure the news desk is far enough away from the back wall so that the shadows of the anchors are cast below desk level. Place your key and back lights as described in Figures 1 and 2.

Light the background with broads focused directly towards the back of the set at about a 60-degree angle so that the light reflected by the walls will bounce down – not onto the talent. Again, make sure that the background is slightly darker than the talent.

If you have a weathercaster, you will probably be using a chromakey wall. For a clean key, it is essential that you light the chromakey wall and talent separately. You should light the wall very evenly with broads placed sixty degrees above the wall. Light your talent with soft lights set at the five and seven o’clock positions and about fifty degrees in the air. The higher angle permits the shadows (what few there are) to fall lower on the wall, important since the weathercaster may occasionally touch it. The weathercaster also needs an intense backlight placed directly across from the camera and above the wall at about sixty degrees above the talent. Make sure you light the wall evenly and the talent’s backlight washes out any of the color reflecting off the wall.

For those dramatic sports interviews, place the sportscaster in front of a neutral colored wrinkled drop. Set up your key light between the four and five o’clock or seven and eight o’clock positions. For a dramatic effect, raise the light high. This will produce a hard light that will create dramatic shadows. Make sure it is at about a forty-five degree angle and flag it so that no light spills on the backdrop. Place a second light at about a forty-five degree angle above the backdrop. Gel the lamp with a double CTB (color-temperature blue). Close the barn doors so that there is barely a strip of light focused on the background. Turn the light so that the slant creates a forty-five-degree slice of blue light behind the talent .

If you have a third light, you can use a gobo to project the outline of your local sports team on the drop to one side of the talent. You can easily make a gobo by carefully cutting the design into a clean piece of aluminum. Don’t be surprised if your lights smoke a bit when using this setup, with the barndoors closed so tight, you create a great deal of heat. Don’t leave it on for a very long time. You may also notice the gobo smoking. The oil from your fingers will take a bit to burn off. Don’t worry; just keep an eye on it.

The key to good news lighting is to make the lighting as pleasing to the eye as possible so that it doesn’t distract the viewer from the information being given. You don’t want dramatic lighting for the basic news setup. Just give them an even, smooth, shadowless illumination. Leave the dramatic lighting set ups to the sports people. For them, go nuts!