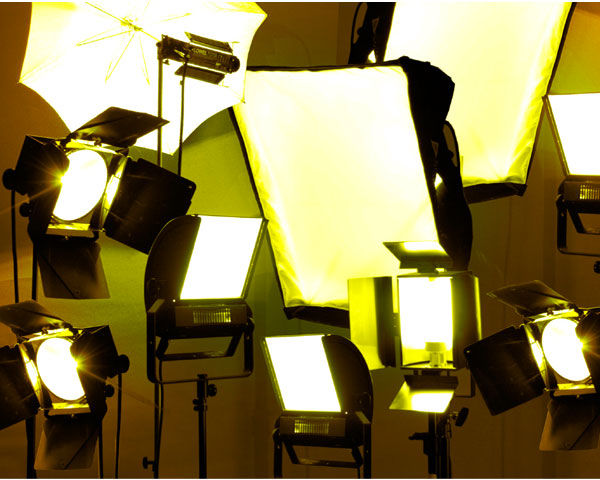 As more and more affordable 3D cameras are released, it’s important to know that you can’t just pick up a 3D camera to shoot and light as you normally would. Today we bring you some tips to get started with 3D lighting, to get the best possible results.

Remember when affordable high definition (HD) cameras were ushered into the world via HDV? It was the next step in digital filmmaking and video production, but it came with a whole new set of challenges. Due to its higher resolutions, focus became even more critical, and directors of photography (DPs) had to pay special attention to that, as well as shooting in 16 x 9 widescreen, compared to years of shooting 4 x 3 fullscreen. Lighting requirements changed, too, so let’s visit those in our 3d lighting tutorial.

Many filmmakers and videographers have learned that transitioning to stereoscopic 3D digital production comes with many more challenges than HD. This includes how much lighting is required by 3D video cameras, lighting techniques and monitoring. 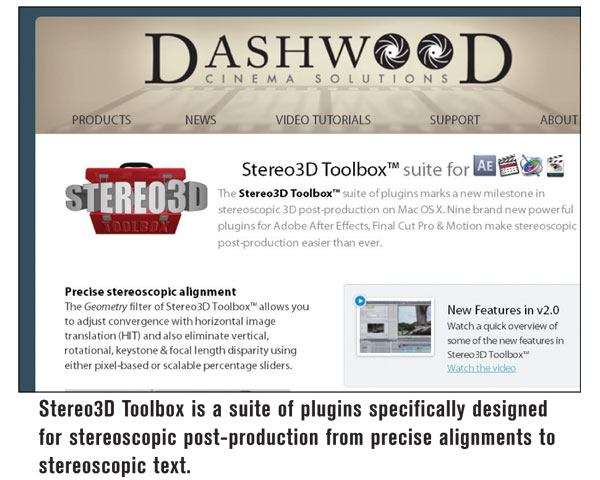 To get this 3D lighting tutorial started, let’s turn to the experts. Bernard Mendiburu is a 3D lighting and production expert and author of the definitive 3D video production guide, 3D Movie Making, and he sums up the most important rule of 3D production this way: Get as much light as you can, then get even more light. The cameras need as much light as possible to get through the lenses, mirrors and sensors. Don’t be surprised if you’re using every light available and then some, and are stuck with a high power bill in the end. It’s all necessary to get the best possible 3D video footage for your project. It’s difficult to stress how much light is required for a good 3D video.

There are some unique challenges when it comes to 3D lighting, and they mostly involve high contrast lighting. With 2D shooting, whether with digital or film, it has never been a problem to have bright whites or dark shadows in a shot, set up through lighting or set design. But this type of filmmaking won’t work in 3D video.

The way the technology currently works, from 3D acquisition to presentation in a movie theater or on a 3D HDTV, there are many more issues with high contrast and inconsistent lighting of bright whites and dark shadows. “Ghosting” (double) images can be seen when the lighting is very bright and the shadows are very dark all in a single shot. That’s why 3D lighting needs to be fairly consistent. Use less light in the foreground and background to help create depth in the shot. Think “3D” when lighting: What will create more depth in the shot with lighting?

“You need more ambient light, artistically, to dig shadows out of black,- he advises. All-white or all-black images lose definition in 3D video, and therefore appear flat. Using proper lighting techniques will define shapes in the shadows, giving more depth to the image, and will help avoid ghosting images.

As far as all-white images go, the reference here are sets or rooms in a home or business with blank, white walls. According to 3D lighting tutorials, a general rule in any kind of filmmaking or TV and video production is to avoid white or light colored walls. Instead, cover them with colorful pictures or paint the wall in a color that’s not so “flat,” avoiding light or dark colors.

Most 3D lighting tutorials will tell you that if you’re working with the more affordable 3D consumer cameras coming out, there will be even more lighting issues. Bernard advises to use “more incident light, technically, to get through the mirrors and filters, to get through the ‘pinhole’ 3D lenses.”

When he mentions “‘pinhole’ 3D lenses,” Bernard is talking about how those consumer 3D cameras are actually built for 2D acquisition, but have a 3D lens attached to them. There is an even greater need for more light than with a more traditional (and more expensive) 3D camera. With the 3D lens, the maximum aperture is F3.2, meaning you’ll need 28 lux of light vs. only one lux in 2D! That’s a huge amount of light compared to 2D, which can use the light of a candle that’s close to the lens, as illumination (around one lux).

With smaller sensor HD and 3D cameras, the potential is there for additional lighting issues with small-chip 3D cameras, possibly even those with dual-sensor setups, not to mention the need for sharper, more high resolution lenses. 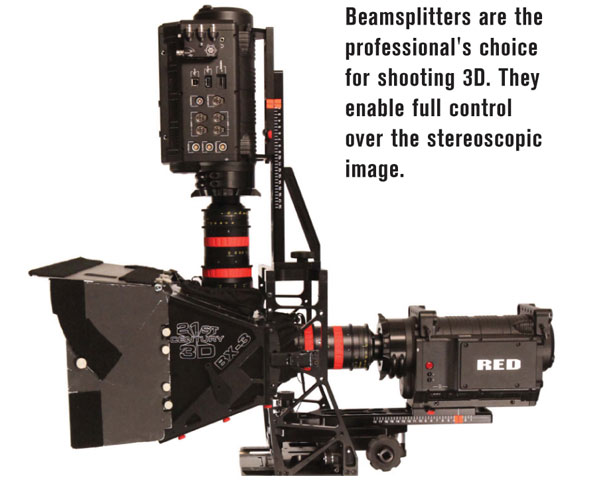 “Beamsplitter [3D] rigs use 50/50 glass which means you lose at least one-stop of transmittance,” says Tim. “One-stop isn’t usually a huge consideration until you start shooting high-speed or short shutter (slow-motion). The beamsplitter will also cause a density and color shift on the reflected camera which will need to be corrected in post.”

A stereo window refers to watching 3D, i.e., ‘window into the movie.’ It’s the frame of the shot. So if an object or person is only halfway in the frame, it will appear as if they’re cut in half in 3D. This is a window violation, and human perception has trouble with this, causing physical issues like eyestrain or a nasty headache.

Tim also advises to avoid lens flares, like those seen in the latest Star Trek film. He explains, “First, every lens will react to flaring in different ways. Secondly, even if the lenses are so well matched that the flares appear identical the flaring phenomenon is occurring on the lens and not in the scene.” 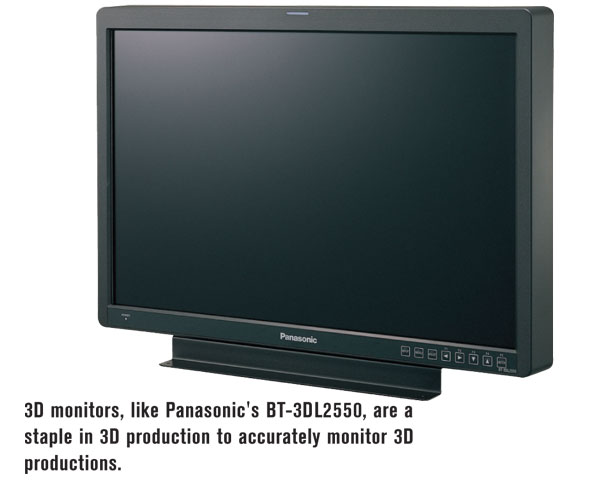 One of the most important tools on set is a calibrated monitor, specifically a 3D HDTV – the larger the better. “There are tons of detail to take care of, and the only sheriff in town is your visual judgment,” says Bernard. He’s right: If you’re trying to shoot your entire project while only monitoring it on a tiny LCD screen or viewfinder, what you may end up seeing in post could haunt you. It’s important that it’s a large, calibrated 3D HDTV or monitor.

“It takes [time] to know all the pits and traps in 3D filming,” Bernard continues. “Would you shoot color without a color monitor? Do not shoot 3D without proper 3D monitoring.” We’ll also add, you wouldn’t record audio without wearing headphones, right?

So with all that lighting, watching out for ghosting images and avoiding flat video footage by adding more light to the shadows, what can filmmakers or videographers do if they want to create something more atmospheric? What if they’re trying to make a horror film or thriller?

Movies are known for their lighting: Comedies and family films are well-lit, inviting; dramas are a little more naturalistic with the lighting; and, as we mentioned above, thrillers and horror films tend to appear darker, more atmospheric. This is where the editor or colorist comes in and saves the day by using color correction tools and plug-ins to create that atmospheric look, while not letting it get flat. It takes practice to make it look natural and not flat, but color correction and grading are even more important than before.

Even major motion pictures aren’t immune: Acclaimed film director Ridley Scott recently signed on to direct two Alien, prequel films, and – as expected – the movies will be shot in 3D. The Alien films are known for their dark, atmospheric lighting, but since 3D requires much more light than a normal production, he admitted that they’ll be grading it darker in post. Otherwise, the film will be too bright and very “un-Alien-like.”

Using these lighting tips will ensure that filmmakers and videographers get only the best possible footage from their 3D cameras and projects. Plenty of light is needed, but the end result will be a great stereoscopic experience. And don’t forget, practice makes perfect!

Heath McKnight is Senior Writer at TopTenREVIEWS.com and a filmmaker. He co-wrote VASST’s two best-selling books on HD production.