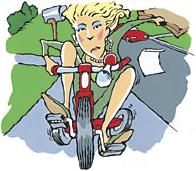 Sooner or later, even the most casual shooter gets an itch to create a story not a record of a birthday party or vacation, but a real movie. Often, that itch gets scratched by second thoughts: too hard to find an idea, too tough to get actors, too complex to shoot in short, just too much work.

OK, but suppose you could dream up a movie in a morning, shoot it in the afternoon and edit the whole thing before bedtime? Suppose you could do it with any old friends or family members, plus yourself as a crew of one? Sound a bit more tempting? Then allow us to tempt you further. Even the most casual production has four phases inventing, preparing, shooting and editing so let’s take a sample story through each one. To ensure our promised simplicity, let’s go for a one-minute movie; that’s the length of a long commercial.


For a 60-second show you don’t need a plot, just a situation: for example, Mom and Junior Start the Day. Now you need a reality check: can you cast a mother and son, or should it be Dad and Junior or maybe Mom and Sis? For this discussion, let’s say you have a Mom and Junior among your family or friends.

We’ll show our two performers getting up, brushing teeth, getting dressed, eating breakfast and leaving the house. See how it works? As you invent your story, keep testing it to make sure it’s easily shootable.

Back to planning: we’ll borrow a tricycle from the Dillards next door. Why a tricycle? Because by itself, a situation’s not enough to intrigue your audience. Mom and Junior Start the Day? Oh whoopee-do.

To satisfy your viewers, your situation needs a concept. A concept is a hook, a gimmick, perhaps just a novel point of view, something that gives the situation extra interest. So you think, hmmmm: they leave the house. Suppose Junior drives the car and Mom rides a kid’s tricycle. You see it in your mind’s eye: after Junior is established starting the car, it drives out of the shot, revealing Mom in her killer business suit, as she hangs her attach case on a handlebar and pedals off on the ridiculous trike. Bada-boom!

Now your situation is energized by a concept and you’ve verified that you can easily shoot it. That’s as much inventing as you need. Onward to preparation.


You don’t need a script or a storyboard, but your action does need a beginning, middle and end. The end is obvious: the payoff of the tricycle gag.

As for the middle, it would be good to pre-plan specific details: Junior tossing pajamas on the floor, throwing on any old clothes, messily brushing teeth, wolfing down cereal. Meanwhile, Mom is carefully styling her hair, checking her outfit in the mirror, neatly drinking her coffee, assembling papers in her expensive briefcase.

Now you need a strong beginning that establishes the situation and secretly plants the concept. Something like this:

EXTERIOR, DAWN: Wide shot of house with car in drive and tricycle beside it.

In just two shots you establish who your people are, where they are and what they’re doing. Since your show will run only a minute, the audience will remember that trike in the driveway when it pays off in the final gag.


For a simple story like this, you can shoot in order. First, make your shots of Mom getting ready, then repeat the process with Junior. At the breakfast table, shoot all of his shots, then all of hers. Finally, move out to the driveway and grab the establishing shot. (Hint: If you shoot the opening with the white balance set to indoor, you’ll get a bluish, dawn-like look. Reset to outdoor white balance for the shots of Mom and Junior leaving later.)

As you shoot, keep three things in mind: coverage, variety and audio. The only dialogue is off-screen, so you can record it as you shoot the alarm clock, with the actors positioned where the camcorder mike will pick up good quality sound. For the rest of the shots, simply keep quiet while shooting, to obtain a clean production track.

In getting full coverage, the trick is to identify the crux of each action and then roll the camera so that you have at least five seconds of footage before and after it. For example, scrubbing a brush up and down on foamy teeth says everything about tooth brushing possibly four seconds, max. But in shooting, start with uncapping the tube and spreading the paste and go on through rinsing and spitting. That way, you’ll have far more leeway in selecting the gist of the action as you edit.

Variety means getting different angles, so that they’ll cut together smoothly. If, for instance, you plan to intercut Mom and Junior shot-by-shot, try framing Mom in decorous medium shots and Junior in dynamic closeups. Look for logical places to get low angles, inserts, cutaways. The more variety that you deliver to the edit bay, the more freedom you will have when it’s time to assemble your show.


Now let’s see how all this goes together. We’ll start with simple analog editing (as detailed in Home Video Hints for May 2001). Start by transferring the outdoor dawn establishing shot (four or five seconds should do it), then cut to a shot of the alarm clock.

From that point on, alternate shots of Junior and Mom, paring each down to the gist of the action, as explained above. For extra punch at the end, follow the shot of Mom starting off with a wide shot of her pedaling away down the sidewalk on her bike.

If you have a computer editing system, you can quickly add some refinements to the basic program. First, start with a fade in and end the show by fading out. Next, blend your sound together by running a music track under the action. Try starting the music as soon as we hear Junior’s "OK, Mom." Since many pieces of royalty-free music run 55-60 seconds, try laying the music first and then timing the remaining visuals to it.

Finally, add your end credits for a professional look. (For a brief program like this, a main title would probably be considered overkill.)

And that’s all there is to creating your own short video masterpiece. You can easily make a show like this with two hours each for pre-production, production and post production. And though a mere 60 seconds may seem hardly worth the trouble, you’ll be amazed at the result. (Why do you think the best shows on TV are often the commercials?)