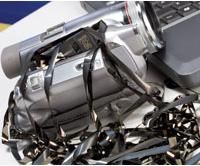 “Leave it on the cutting room floor” is an old film phrase signifying to edit out stuff you don’t need. It’s a good reminder to cut down your piece for a tighter final project.

There are two people on Earth who want to watch all the raw footage of that wedding video you shot last week. You, because you think you’re the most amazing cinematographer you’ve ever met, and the bride’s mom, because she wants to complain about all the stuff you missed. Everybody else is going to fade after about 30 minutes.

What You Need to Edit Video

In this context, “editing” means editing video with a computer – what is called “Non-Linear” editing. This just means that you do not have to scroll through your whole tape to grab a scene from it; you can access it randomly. There are linear editors, but they fell out of common usage a decade ago, and mostly only news gathering TV stations do tape-to-tape editing anymore. At the very least, to edit video, you need:

a) a video capture device,

b) a computer with NLE software, and

c) a place to store your video.

Many modern computers contain everything you need to get started right out of the box. A DV camera will interface with your computer and digitize your video, which you can store on your internal hard disk and edit with software such as iMovie (on a Mac) or Windows Movie Maker (on a PC). You can get fancier by upgrading any one of the three as your work calls for it.

The easiest way to edit most things is with a master shot and cutaways. Let’s say that you’re making a music video for your favorite band (you may pause here for several seconds of daydreaming). The simplest way to do it is with one continuous shot of the entire performance synced to the audio track. This static shot by itself is boring and nobody wants to watch three minutes and fifteen seconds of this, so you also shoot “cutaways.” After shooting your master shot, you go through again and shoot closeups of the guitar player grimacing musically, the singer shaking his mullet, the audience screaming and throwing their hotel room keys on the stage, and then you cut this video on the track above the master shot without interrupting the audio. You have a continuous audio track that’s always synced to the master shot, and you can cut away to other things to keep it from getting dull.

This works with something like a wedding as well. Your master shot might be a three shot of the bride and groom with the justice of the peace. Then your cutaways (shot with a second camera) might be a nice medium shot of the bride’s father and his shotgun, a closeup of the bridesmaid crying, children fidgeting, a wide shot from the back of the hall, some panning shots across the audience, etc. This is called ‘b-roll’ in the Industry. “B-roll” just means “other stuff” or filler, (the “A-roll” is your master shot). Drop selections from your b-roll onto your master shot (remember to only drop the video; you want the audio track from the master shot), and voilá – instant video.

Don’t Get All Crazy With the Effects

Just because your video editor has a star wipe transition doesn’t mean you should ever use it. With the exception of a few scenes in Star Wars, most professional film directors rarely, if ever, use a transition other than a cut or a fade. To the untrained eye, a star wipe might look cool, but that’s going to wear off. I speak from experience. When I first got a digital video editor, I got addicted to the “page peel” transition. Now I show my early videos to people and watch them grimace: “What’s with all the page peels, dude?”

A jump cut is typically a long static shot with a middle section cut out. It’s called a “jump” because while the viewer is looking at the shot, an actor may jump from one place to another instantly. Filmmakers such as Woody Allen have intentionally used jump cuts for effect, but it’s usually an error you want to avoid. One easy way to avoid a jump cut is to paste a cutaway over the edit; a cutaway can be almost anything – a close up, a shot out the window, the face of another actor. The idea is that the viewer isn’t “looking” when the jump in continuity happens.

One of the most famous continuity errors is in the 1977 film Bullitt, where Steve McQueen is chasing a black Dodge Charger and passes the exact same green Volkswagen five times. My friends all laugh and shout every time we watch this movie: ‘There’s that green VW again!’ Obvious gaffes made by a filmmaker are the delight of some fans that spend hours logging them into Web sites like www.moviemistakes.com, but they’re the bane of a director’s existence. Imagine being Peter Yates and having people constantly ask you if you’ve passed any green Volkswagens today.

You can avoid continuity errors by being meticulous about your shots. Professionals use a dedicated continuity person who takes hundreds of Polaroids for comparison between shots. You can review your video and keep an eye out for things that change from shot to shot. How full should that glass be? Where was the dog sitting? At what point in the dialog did a particular character stand up? Was the character wearing glasses? Paying attention to continuity helps your viewer believe the story that you are telling.

Beginning editors often make the same mistakes. With a few tools, some attention to detail, and knowledge beforehand, you can avoid many and be on your way to good editing technique the first time around.