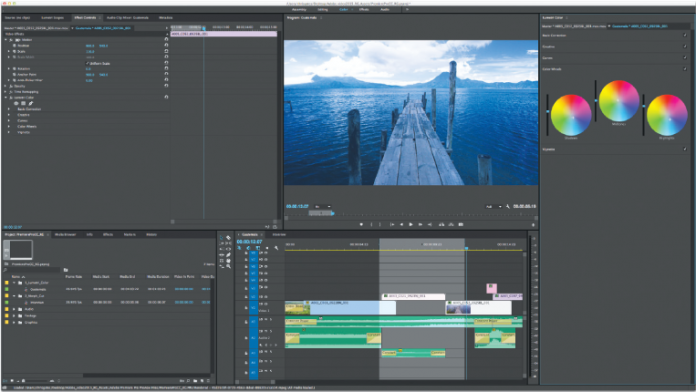 Updating Creative Cloud applications is easy to do through the Creative Cloud desktop application, which manages applications, files and libraries associated with a Creative Cloud subscriber’s account. Downloading and installing Premiere Pro CC 2015 is simple and straightforward, all a user has to do is access their available updates through the CC desktop app and choose to download. However, there is a catch that surprised many users on the first day of availability. The CC 2015 downloads default setting removes previous versions of Adobe applications from the user’s system. However, a couple clicks into the download menu allows the user to turn this functionality off and the user’s older versions will remain installed.

There are several noteworthy new features in Premiere Pro CC 2015. The first being the new Lumetri Color Panel. Adobe has built a wide array of color grading and correction tools into Premiere Pro, allowing video editors to dial up highly detailed and customized color adjustments. This doesn’t rule out Adobe Speedgrade CC as a color finishing tool, but not all editors round trip their projects into a coloring suite and it does give the editor a great amount of control inside of Premiere. The tools themselves are easy to work with and range from user friendly mobile app-style coloring sliders to advanced curves and color wheels. Color grading through the new Lumetri Color Panel is fast, easy, and it works great on a wide array of footage, from H.264 files to 4k formats. The new panel completely changes color grading in Premiere for the better.

The user is able to select their sequence and send it to Audition with Dynamic Video Streaming.


Another new tool is the Morph Cut transition, which is made to smooth over jump cuts in interviews and dialog shots. It’s fairly easy to use; you apply it like you would any other transition in Premiere. However, it takes a little time to analyze the footage and build a smooth morph cut. The two shots used in the transition need to be near identical, it works best when removing simple “ums” and “ahs.” The shots also need to be from a locked down camera. It’s not successful 100 percent of the time, but it works frequently enough that it will help editors get out of a jam on occasion.

There is also now a dynamic link between Premiere Pro CC and Audition CC, much like the one between Premiere and After Effects. The user is able to select their sequence and send it to Audition with Dynamic Video Streaming. This, in turn, creates copies of the audio media and places them into a multitrack project in Audition with the video being dynamically linked to Premiere Pro CC. This means any changes to the image or video sequence in Premiere Pro will automatically show up in the Audition video track. This is a big time saver as editors no longer need to render proxy files from Premiere and import them into Audition. The downside is that the audio is not dynamically linked, but the time saved by this new feature is definitely a step in the right direction.

Premiere Pro CC 2015 now has direct access to a user’s Creative Cloud libraries. This combined with the addition of the Adobe Hue CC mobile app is a revolutionary new feature. Users can use Hue CC on their mobile device to create custom “looks,” or color profiles, and then import those “looks” directly in Premiere and apply them to their footage. This also allows the editor to upload frequently used files, such as logos, into their CC libraries and access those files from wherever they’re working from within Premiere Pro.

A new interface feature in Premiere Pro CC 2015 is the task-oriented workspaces. The ability to save custom interface layouts is a staple of Premiere that has existed for some time. The new task-oriented workspaces feature provides a button bar of preset workspaces that make it easier for the editor to rearrange the interface to suit their task at hand. As always, users can arrange their own custom workspaces and now add them to the button bar. It may sound like a small feature but with the new tools, such as the Lumetri Color Panel, it is a useful interface upgrade and speeds up the editing process.

These new features, though some are bigger news than others, make Premiere Pro more powerful than ever and we’re excited to see how they will be put to use.