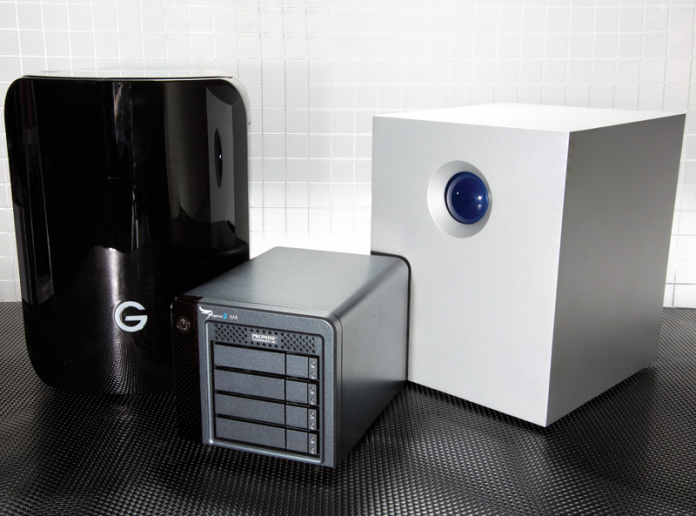 If you’ve ever lost important footage or data because your hard drive went kaput, you understand the importance of redundant storage. RAIDs are an easy way to backup data in case of crashes and can be great resources if your computer doesn’t have much internal storage space. If you’re doing any kind of professional film work, an external hard drive is a necessity, but sometimes backing up and transferring your data can be a lengthy and inconvenient process. Luckily, G-Technology, Promise Technology, and LaCie have all come out with new high-end external hard drives, all with data-protecting RAID and time-saving Thunderbolt 2.

Like the original Thunderbolt, Thunderbolt 2 boasts blazing fast speeds, but with the added bonus of being able to simultaneously write and stream uncompressed 4K video.

RAID, or Redundant Array of Independent Disks, is a data-protection technology used in external hard drives. The higher the RAID level, generally speaking, the safer your data is. RAID 0, for example, acts as though all the disk drives are just one big drive; it means even if only one disk drive fails, you’ll lose everything. RAID 1 means all of your data is written identically on multiple drives, so if one drive fails, you’ll still have all your data backed up on another drive. The disadvantage to higher RAID levels is that they require more independent disk drives, so RAID enclosures that offer them are often more expensive.

The only real downside to Thunderbolt 2 is that most computers running Windows aren’t compatible, and it’s only available on newer Apple models. However, it’s important to remember that while Thunderbolt 2 was made with Mac OS X in mind, some Thunderbolt drives are also compatible with Windows computers with Thunderbolt 2, you will just need to download some drivers or software to get them working. Even so, Thunderbolt devices are often pre-configured for Mac, so getting them to work on Windows can be a pain.

That said, if your computer only has the original Thunderbolt, you can still use these hard drives, you just won’t be getting all the benefits Thunderbolt 2 brings. Thunderbolt 2 is backwards compatible, but the throughput is halved.

The G-SPEED Studio R is G-Technology’s most significant contribution to the new Thunderbolt 2 hard drive market. Its price ranges from $2,200 to $3,600, depending on how much storage space you need, which, by the way, could be up to 24TB. Of course, you could also get the 12 or 16 terabyte models if 24 is more than you need. Like its storage capacity, the Studio R’s physical enclosure is rather large at just over ten inches tall. It’s also quite heavy, so if you’re looking for a portable storage solution, the G-SPEED Studio R could be unrealistic.

The first thing you’ll notice after taking the Studio R out of its box is its sleek design clearly modeled to look nice next to the newest Mac Pro. On its back it has two Thunderbolt 2 ports, a power socket and a power button. Four enterprise-class disk drives are hidden behind a cover at the top of the machine. For those not familiar, the enterprise-class designation basically means that the drives are more expensive, but perform better and are more reliable.

Of course, how an enclosure looks isn’t nearly as important as how it works, and the Studio R definitely does not disappoint. It is compatible with RAID 0, 1, 5, 6  and 10, and of course can use Thunderbolt 2 no matter what RAID level you choose. The Studio R is preconfigured in RAID 5, but it’s also compatible with RAID 10, which provides a very high level of protection. RAID 10 takes up a lot of disk space, but is still a speedy and reliable option if you have four or more independent disks. It’s important to remember, though: Changing RAID levels requires you to backup all your data somewhere else and can take a significant amount of time, so it’s a good idea to choose a RAID level early and stick with it.

Our tests confirm G-Technology’s claims about the enterprise-class disk drives. We tested read/write speeds in RAID 0 , RAID 1 and RAID 5 and found that the G-SPEED Studio R was the fastest of the three featured drives in RAID 0 and 1.

Like G-Technology, Promise Technology has created its own line of RAID and Thunderbolt 2 external hard drives, in this case the Pegasus2 series. The series contains hard drives that range in price from $1000 to $4500. The most expensive of the series is the absolutely enormous Pegasus2 R8 with a 32TB capacity and eight separate hard drive bays. In the likely case that the R8 has more than enough space for you, the Pegasus2 series also has hard drives with 24, 18, 12, 8 and 4TB capacities, in addition to a new 2TB SSD model. The model we tested is the 4TB Pegasus2 M4, which is both the smallest and cheapest model. It’s only about 4 inches tall and weighs a little more than 5 pounds. While still not a featherweight, it’s definitely more mobile than the other drives featured here.

The hard drive itself is small, square and black and has a power button in the front. The back has two Thunderbolt 2 ports and a power socket. It’s very minimal without extra buttons or ports to complicate things. Its size clearly doesn’t hurt its RAID capabilities however — with four 1TB enterprise-level 2.5” hard drives, the M4 still boasts RAID 0, 1, 5, 6 and 10. The larger Pegasus2 models, with 6 or 8 separate disks, even offer RAID 50 and 60. However, aside from smaller storage capacity and fewer RAID levels, the M4 compares favorably to its larger siblings.

In our speed tests, the Pegasus2 M4 trailed behind the G-Technology and LaCie drives, but still delivered plenty of speed and then some for DSLR and lower bitrate 4K video editing.

The Pegasus2 M4 is smaller than the other models, but is still able to dish out great speeds, five RAID configurations, and a commendable four terabyte storage capacity. While it may not fit in your pocket, the Pegasus2 M4 is still very portable and reliable.

The 5Big Thunderbolt 2 is LaCie’s contribution to the Thunderbolt 2 hard drive market and, as its name suggests, it is large. At almost 9 inches tall and an immense 17 pounds, the 5Big Thunderbolt 2, like the Studio R, is far from portable. It costs $1,300, $2000 or $3000 for 10, 20, or an impressive 30 terabytes, respectively. With these storage options, the 5Big is physically massive for a reason.

The hard drive is square and silver, with dual Thunderbolt 2 ports and a power socket on the back side. The front has nothing but a blue orb, which functions as the both the drive’s power button and a way to enter power saving mode. Like the other featured drives, the 5Big requires a Thunderbolt or Thunderbolt 2 port and Mac OS X 10.9 or later. At the time of this writing, the 5Big Thunderbolt 2 is not Windows compatible. However, the 5Big stands out in this lineup because, unlike the Studio R and M4, it has five independent disk drives instead of four.

While five independent drives are nice, it doesn’t guarantee that the 5Big has more space or faster speeds than the other drives. However, the 5Big does offer a RAID level the Studio R and M4 don’t; in addition to RAID 0, 1, 5, 6 and 10, the 5Big also offers JBOD. It is actually a little misleading to call JBOD a RAID level, because in JBOD, or “Just a Bunch of Disks,” there is no RAID configuration. Instead, all the drives are treated either separately or as one big drive. JBOD offers no protection through redundancy and therefore is a risky option without another backup solution in place.

In our speed test, The 5Big couldn’t match the G-SPEED Studio R in RAID 0 and 1, but was faster in RAID 5.

The 5Big Thunderbolt 2 is big, both in weight and storage capacity, but as long as you don’t expect to carry it around in a backpack, it’s an extremely solid hard drive. With five independent disk drives and six different RAID configurations including JBOD, the 5Big Thunderbolt 2 offers a versatile storage solution.

Just like the original Thunderbolt, Thunderbolt 2 boasts blazing fast speeds, but with the added bonus of being able to simultaneously write and stream uncompressed 4K video. However, just because a drive has Thunderbolt 2 doesn’t necessarily mean it will meet your storage needs. G-Technology, Promise Technology and LaCie all created hard drives to take advantage of Thunderbolt 2’s speed, and overall they each succeeded. If you need a drive that’s portable, boasts high speeds and has data protection, the Pegasus2 M4 is a fantastic option. If you aren’t so worried about moving your drive around and would rather just have more storage capacity, the G-SPEED Studio R or 5Big Thunderbolt 2 might be exactly what you’re looking for. The 5Big is slightly less expensive per terabyte than the G-SPEED Studio R, but it’s also a hair slower (your mileage may vary).

Regardless of your purposes, if you have the money, then a drive with Thunderbolt 2 is definitely worth your investment.

J Wheeler White is a college student majoring in film and has been involved in multiple productions throughout his studies.