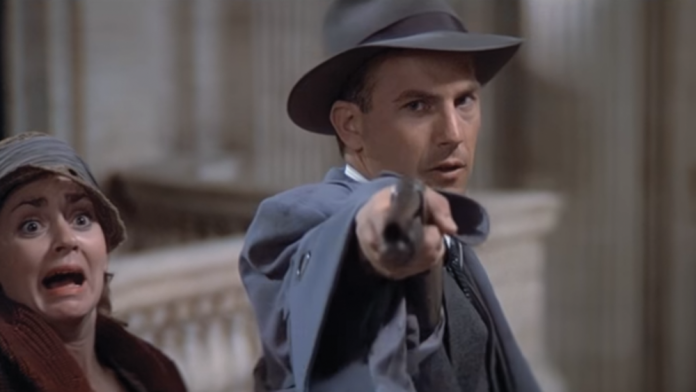 In this article we look at a breakdown of the Union Station shootout scene from Director Brian DePalma’s 1987 crime classic, “The Untouchables.” We will reveal plot points deep within the movie.

The film centers on the Untouchables working to arrest Capone, primarily through charges of tax evasion. Eventually, the Untouchables take into a custody one of Capone’s thugs who is willing to testify against him. The only problem, Capone has the thug and one of the Untouchables executed before the court date. Without a witness, the district attorney’s office is contemplating throwing the case out of court. No problem, Jim Malone (Sean Connery) is Eliot Ness’ right hand-man and has plan. Unfortunately, Malone is executed as well, but with his dying breath he informs Ness of where to find Capone’s bookkeeper– on a train out of Chicago. At approximately one-hour twenty-six minutes into the film, Eliot Ness (Kevin Costner) and George Stone (Andy Garcia) go to Union Station on a last ditch effort to arrest the bookkeeper in order to keep the case alive.

The setup of the slow motion sequence is a big part of why the scene works.

The scene opens with Eliot Ness and George Stone entering an empty and voluminous Union Station. Stone departs from Ness and heads down the stairs to cover the south entrance to the building. Ness takes post at the top of the stairs. The scene is interrupted by a lone mother with her crying baby in a carriage. Her presence disturbs Ness, as he can see mother and child are at risk in what’s about to go down. As the mother tries to comfort the child, every person entering the station is either a suspect or at risk. Vignettes of innocent bystanders pass through the station as the mother struggles to pull the baby carriage and her luggage up the stairs. Concerned with their safety and the imminent danger, Ness leaves his post and helps the mother pull the baby up to safety. As they climb the stairs Capone’s men enter and take positions at the top and bottom of the stair case. Ness is visibly shaken by their presence. Just as he gets the baby carriage to the top of the stairs, a thug who previously had a direct run-in with Ness’ fist enters the station. He and Ness simultaneously spot each other.

Ness and the thug pull their guns and the start of the shootout also sets off the slow motion sequence. The steps are now filled with an assortment of characters; there are five armed thugs, the bookkeeper, the mother, the baby in the carriage, a couple of sailors, an innocent bystander, and of course Ness and Stone who rush to aid in the fight. There’s a lot for the audience to keep track of, as well as the narrative gravitas of the scene. If Ness and Stone don’t get the bookkeeper, Capone goes free and their friends die in vain. For this reason, slow motion is used to help the audience follow what’s unfolding, as well as to build tension into every action that takes place within a couple of seconds.

The slow-mo sequence is cut as a montage, no doubt an homage to the Odessa Steps sequence from Sergei Eisenstein’s “Battleship Potemkin.” The shots are hard cut between action shots of guns firing, reaction shots, close-ups of the baby carriage wheels bouncing down the steps, the baby laying in the carriage, the screaming woman and Stone running to aid Ness. What helps to make this sequence work is the dual narrative that takes place between the peril of the baby and the danger presented to Ness. The baby carriage’s journey down the stairs sets the timing and pace for the entire shootout. The slow motion action cuts between the baby’s descent and the shootout raise the scene’s tension above the sum of its parts.

Audio also plays a crucial role in making the scene work. When Ness and Stone first enter the station, the quiet stillness of the station is amplified by every footfall. An ominous musical score underlays Ness as he surveys the potential suspects and victims. When the baby carriage enters the scene, a second musical theme is introduced, a music box style lullaby that plays simultaneously with the dark score. Although the two tracks play together, they are separate. The lullaby fades out when Capone’s men take to the staircase and the dark score swells as the rhythmic banging of the carriage’s wheels strike each step. When the slow-mo sequence begins, the audio is a cacophony of gunshots, footsteps, the score and the carriage. The pace of the carriage on the steps increases throughout as the action builds. At the end, Agent Stone slides into frame, saving the baby carriage as Ness takes out the last remaining threat. At this moment, Ness checks on the baby and the dark score transitions to the music box lullaby and the scene transitions out of slow motion to real time.

“The Untouchables” Union Station sequence is a beautiful example of cinematic editing through the use of slow motion. It’s a technique that can be easily exploited, but when it’s set up correctly, slow motion can grasp hold of the audience, build tension and keep them in anticipation of what will come next in the story.