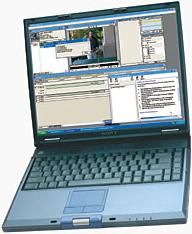 Editing video on your laptop on a transatlantic flight to London may make for an interesting marketing campaign, but is it feasible in the real-world? The idea that we might capture, edit and output a movie while in the field, either on location or over the course of a three-day conference for example, is very appealing. It was with this in mind that we took the Sony VAIO GR290P video editing laptop through its paces.

The GR290P is a fully-appointed desktop replacement, complete with a DVD/CD-RW drive. Still, at 5.6 pounds, including the battery, it’s certainly not a backbreaker. The internal 40GB hard disk was divided into two partitions: a 17GB system disk and a 23GB storage disk. We were a bit wary of the 5,400-RPM drive speed, suspicious that it might not keep up with the DV data stream, but we experienced no dropped frames on capture or print to tape.


After fully charging the battery, we unplugged the AC power to test the battery while we edited. As soon as we pulled the cord, the large and bright 15-inch TFT screen dimmed to about 50 percent of its normal brightness. At this level, we would have had no problems editing documents or sending e-mail, but we found it was difficult to edit images or do any sort of picture adjustment of our video. It was, however, certainly possible to capture, edit and output to tape in this low-power consumption mode. The payoff was that the battery lasted for an impressive two hours and 43 minutes. During this time, we were constantly using the computer, executing many hard disk operations, such as capturing and playing back, as well as CPU-intensive tasks, like rendering.

We retrieved a number of camcorders from around the lab to test compatibility with Sony’s IEEE 1394 input, proprietarily called i.LINK, which had been a source of compatibility problems in the past. Windows XP automatically detected the Canon Optura 100MC that we hooked up first. We ran DVGate Motion, Sony’s capture application, and immediately had device control and could easily capture and print to tape. Without closing the application, we disconnected the Canon and plugged in a Panasonic PV-DV701 and then a Sony TRV17. Windows XP detected both and DVGate continued to function as if nothing had changed. Adobe Premiere LE’s capture application did not allow us to hot-swap camcorders without re-running the application, however.


DVGate Motion proved to be a capable capture app with a good manual batch-capture feature. It also had a scan utility that automatically scanned the entire tape in fast forward mode and created a batch capture list with short four frame thumbnails of the detected scenes, finishing the entire tape in about seven minutes (on the Canon). Unfortunately, the optical scene detection was sometimes problematic. While this method allowed the batch capture to cope with a break in time code on the tape without hesitation, it also broke some sections of the tape into several four- or five-second-long scenes that should have been unified. This is an inherent risk of optical scene detection, but DVGate was more sensitive than other applications we have used. Because of the many very short scenes, batch capture was painfully slow and careful, stopping and rewinding after every clip, even if it was part of a consecutive capture. It took almost three hours to capture a single 60-minute tape. Canceling the process in the middle deleted any already captured files.

The GR290P came with Adobe Premiere LE as its primary editing application. Premiere LE is a fine editing environment and worked well on this machine. We created a 24-minute project, rendering sections that needed rendering along the way. Timeline scrubbing and previewing of rendered sections to the camcorder worked well. In fact, besides saving screen real estate by using the camcorder as a preview window, we solved the dilemma of using the dim screen in this low-power consumption mode, watching the movie on the camcorder’s bright LCD.


Exporting the rendered timeline straight out to the camcorder worked well. We also exported the timeline (rendered) to an .avi file, but the relatively slow hard disk caused the rendering process to take more than twice real time, taking nearly an hour to output a 24-minute project. There were no warnings at all, but, as we expected, only about 18 minutes were rendered, since the file size was limited to 4GB. In addition, the DVGate software could not use this type-2 DV .avi file. This is an important consideration only if you need to render your projects out to a single DV file.

Compared to desktop models, notebooks are not the ideal tools for editing video. LCD screens are not that great for visual work, and laptop hard disks are usually smaller and slower than desktop models. But if portability is what you’re after, the VAIO line has a lot to offer. We found the Sony GR290P to be a portable post-production powerhouse, perfectly capable of editing video without problems. The impressive battery duration will allow you to do a significant amount of editing, even if it doesn’t last the entire flight from London back to New York. Unless, of course, you are on the Concorde.