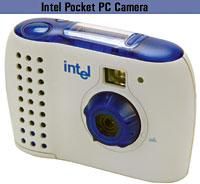 While digital video cameras have also snapped still photos for quite a while, digital still cameras generally could not accomplish similar double duty recording video. But as multimedia types and technologies continue to proliferate and converge, we see more crossover products.

Two inexpensive still cameras that can also record some limited video are D-Link’s DSC-350 and Intel’s Pocket PC Camera. They both sell for less than $150, and both double as WebCams as well.

Installing the included drivers and software was quick and painless; we used a Compaq Presario 1247 laptop computer to test the camera (AMD K6/2 400MHz, 96MB RAM, 5GB hard drive, Win98SE). After installing the software, we set out to grab some video and a few still photos.

The Intel camera records video in 10 second "shots." Holding down the button to shoot a video clip works nicely for recording short clips, but the camera automatically stops at the 10-second mark. You can release the button and almost immediately shoot more, but if you want scenes longer than 10 seconds with this camera, you will have to capture directly to your computer’s hard drive (connecting it via the USB port as a WebCam).

After shooting several short video snippets, we connected the camera to our computer and transferred the video (and a few stills) to the hard drive. The camera holds about six 10-second video clips at 320×240 and 20fps (frames per second), writing clips as Indeo .avi files. Our clips played back at reasonable quality, although a bit too contrasty. The still images were 640×480 .jpgs and also appeared a bit contrasty and were slightly overexposed.

We experimented with different camera settings (of which there are very few) and in the capture driver on the host PC, but were never able to make a significant difference in image quality. It would have been nice to be able to load new settings into the camera for a specific situation, or make some image adjustments on the camera itself.

D-Link Systems is probably best known for its inexpensive networking hardware, but has expanded into all sorts of computer gear in the last couple of years. One of its latest gizmos is the DSC-350 Digital Camera Plus WebCam. Regardless of how it’s classified, the product is, like the Intel Pocket PC Camera, a WebCam that you can unplug and carry with you.

Also like the Intel, this little camera can shoot video, just not a whole lot of it. You can record about 4 1/2 minutes of 20fps video at 160×120 or 4 1/2 minutes of 4fps "video" (which looks more like more like sequential stills) at 320×240 into this little camera’s built-in 8MB of RAM. The D-Link bundles SE versions of MGI VideoWave video editing software and MGI PhotoSuite for processing stills.

Installing the TWAIN driver and bundled software was a cinch. To test the D-Link, we took the camera off its tether, grabbed a couple of stills and shot some video. Unlike the Intel camera, the D-Link will record until the memory is full, not just in 10-second blocks.

One major area where the D-Link was clearly inferior to the Intel was in picture quality. In well-lit, but not heavy contrasted environments, the cameras performed equally well. But in low light, the D-Link either produced poor images, or failed to register an image at all, while the Intel continued pumping out decent pictures. In high contrast environments, like where a pattern of very bright sunlight was interspersed with heavy shadow, the Intel produced usable images, but the D-Link either severely over- or under-exposed the scene.

The D-Link camera did score points for drawing power through the USB cable when connected to the PC, while the Intel continues to rely on the four AAA batteries.

Both of these cameras are inadequate for any serious shooting, but for the casual shooter who just wants to post a short clip of video to send as e-mail or post on a personal Web page, they certainly fill that narrow niche. Both cameras came with some editing software, which would allow you to take your short clips and build a simple program. Given their low cost, it could certainly get someone with very limited finances into digital video.

The Intel produced more consistent, better quality images, but the D-Link allowed us to record more than 10 seconds at a time.