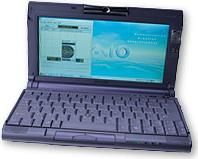 When Sony sent us the VAIO PCG-C1XS PictureBook laptop computer, we were more than a little excited. It includes a built-in i.LINK port, a 12GB hard drive and is smaller and lighter than most other laptop computers. In fact, the VAIO is so small, it almost seems like a cross between a PDA (like a Palm Pilot) and a laptop. But don’t let the small size fool you, this little computer has the power to do a lot for the videographer.

The PictureBook packs a Pentium II 400MHz processor. There is 64MB of SDRAM (which can be upgraded to 128MB) and a 128-bit video card that sports 2.5MB of video RAM. For storing those video captures, the VAIO PictureBook has a 12GB hard drive that Sony partitioned into an 8GB system drive and a 4GB storage drive. Sony would have served videographers better if they had provided a little more room on the capture partition, but Sony claims they left plenty of room on the system partition so that you never squeeze the resources of this computer.
The monitor on this laptop is an 8.9-inch widescreen active matrix TFT LCD monitor with a maximum resolution of 1024×480. The monitor is sharp and clear and is easy to see from the side too. Sony has included an i.LINK port on the side of this laptop. With the i.LINK port, you can easily capture video from a Mini DV or Digital8 camcorder or even use the i.LINK port to do live captures to the hard drive using the camcorder’s built-in optics.

Hey, It’s Got a Video Camera

One interesting feature of the VAIO PCG-C1XS is the built-in still and video camera called the Motion Eye. This tiny camera is mounted on the top of the monitor; it can swivel to cover either the person who is typing, or to see what that person sees. There is a "capture" button that allows you to capture video from the camera at a single touch. The camera even has a tiny dial for manual focus control.
There is a catch though, you won’t get full-frame full-motion video with the Motion Eye camera. It is limited to 640×480 at 15 frames per second or 320×240 at 30fps. The quality of the Motion Eye’s video is fine for small Web video productions. However, if you are planning on exporting your footage back to tape, you’d be better off using your digital camcorder. You can then capture your footage and when you’ve finished editing, transfer the video back to tape.

Capturing in the Field

Sony’s DVGate Motion capture utility is wonderful. The capture utility’s interface is clean and straightforward. It supports batch capture, and you can export your EDL to other programs. DVGate motion provided full deck control when we tested it with the JVC GR-DVL9800, and we experienced no troubles at all capturing video from the camcorder to the VAIO.
With the PictureBook, videographers who need to edit their work quickly, such as news videographers or other independents, can now capture and edit their video in the field, saving valuable time.
You can tell that Sony was looking out for videographers with features like the jog/shuttle wheel on the side of the laptop. You can use it to navigate through your applications and then you can use it as a jog/shuttle control when you are capturing video in DVGate Motion.

There are a few shortcomings inherent to the VAIO PictureBook. To start with, Sony doesn’t ship the unit with any "real" editing software. The program Sony included, DVGate Assemble, won’t allow you to do anything more than trim and change the order of the clips that you’ve captured with the DVGate Motion capture utility. We would have liked them to have at least included Adobe Premiere LE (limited edition) to allow you to add transition effects, titles and audio editing capabilities. To really use the PictureBook to edit video, you’ll need to install your own video editing software.
This leads us to another shortcoming. The unit does not have a built-in CD-ROM drive. This was likely a decision made by Sony to keep the unit as small as possible. The lack of a CD-ROM makes installing software a bit of a hassle. To install your editing software, for instance, you would need to acquire an external CD-ROM drive. Sony sells the PCGA-CD51 ($299) as an accessory for the PowerBook. Having to purchase the external CD-ROM drive isn’t the end of the world, but it is an added expense that potential buyers should take note of nonetheless. Capturing music from a CD, something that video editors do often, poses the same problem. You’ll need that CD-ROM drive.
Fortunately, the machine has more than enough power to run the full versions of popular video editing software packages, such as Adobe Premiere ($579) or Ulead MediaStudio Pro ($595).
The VAIO PCG-C1XS is a small but powerful video editing laptop. It features a built-in i.LINK port, the DVGate Motion capture utility and it is powerful enough to run your favorite editing software. The 400MHz processor keeps this machine running fast. If you’re looking for a featherweight DV editing station with the power of a desktop editor for around $3,000, the VAIO PCG-C1XS will deliver.