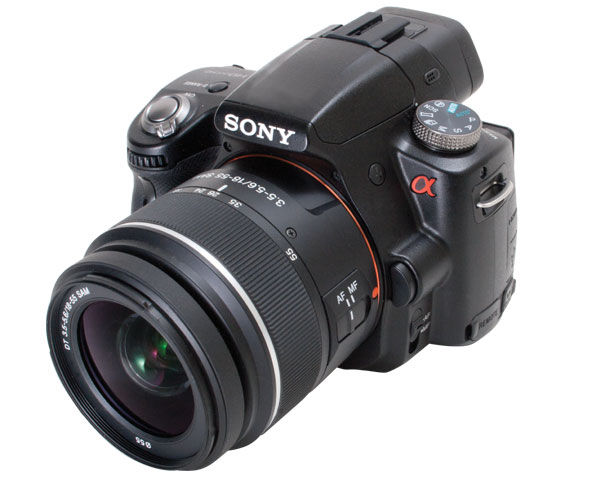 Sony is looking to change producers’ relationship with HDSLRs with the latest edition to the Alpha family – the A33. With a 14.2 megapixel CMOS sensor, HD video recording, and a different approach to video autofocus, Sony wants it to be the perfect choice for the go-to compact HDSLR. With so many choices, has Sony made the right changes in order to stand out? We gave it a thorough look to find out. 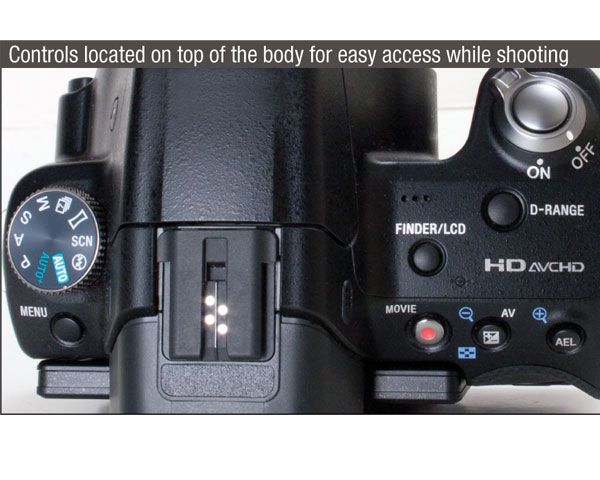 Sony’s dedication to making a lightweight camera is made apparent when first picking up the A33. Even with the kit-provided 18-55mm lens, it weighs in at just slightly over a pound. We can imagine that it might become somewhat front-heavy, and off balance with any lens bigger than the one in the kit. The lightly-textured rubber grip provides a comfortable hand-hold for all but the largest hands. There is even a convenient rubber thumb-rest on the back of the camera for an extra solid hold, with no accidental button pressing. There is a control wheel on the front of the grip, just under the shutter button, that was a little awkward to use, especially when having to hold down the exposure button on the back to change the aperture.

The control dial, hot shoe, pop-up flash, and menu/record function buttons reside atop the camera. The battery and SD card compartment are on the bottom. A dedicated SD card slot would have been a welcome addition for easier media swapping during shooting. A 3-inch, swiveling, flip out display sits on the back of the A33. The colors are vivid, the contrast is very high, and the screen is usable in bright sunlight. The function buttons, and directional pad sit to the right of the LCD.

Sony has changed the way the A33 (and A55, its bigger brother,) shoot stills and video. While it isn’t a new concept for film cameras, Sony has brought it to the digital age. Outside, the A33 looks to be a standard compact DSLR, with a slightly lower profile eyepiece. On the inside though, it houses an entirely different mechanism. Instead of a flip-up mirror that reflects light from the lens into the viewfinder, it has a fixed, slightly reflective, piece of glass angled in front of the image sensor. This translucent mirror allows almost all of the light to pass straight through to the 14.2 megapixel CMOS sensor, without adversely effecting image quality.

A small amount of light is reflected up to the 15-point, phase-detect autofocus sensor, which is placed just as it would be on a traditional single lens reflex system. This configuration allows for simultaneous use of the image sensor, and the phase-detect autofocus. All of this translates into super fast autofocus in live view, for stills and video. This is mostly unheard of in HDSLRs. The new mechanism does mean that there is no optical viewfinder. In its place is an electronic viewfinder, identical to what is found in high-end point-and-shoot cameras and hand-held camcorders.

The whole point of the new translucent mirror system seems to be for a less complicated, and much more streamlined video experience. The speed and accuracy of a DSLR’s autofocus has been adapted to work seamlessly with the video recording. Cameras such as the Canon EOS Rebel T2i, record amazing high quality video, but can be frustrating to use for simple point and shoot recording applications, because of the lack of a good focus system. The A33 is in a class of its own when it comes to simple video recording. The quick autofocus allows for easy handheld shooting, just like we have come to expect from traditional camcorders.

The A33 is one of the few HDSLRs that we felt was a joy to use in most situations. Smooth, sharp video with accurate colors combine with responsive controls to create a simple, high quality, and fun recording experience.

Video is recorded at 1920x1080i AVCHD, and 1440x1080p MP4. We would have liked to see more resolution choices and frame rate options, such as 720p at 60fps, or anything at 24p. The stereo mics just behind the pop-up flash perform well on their own, but can be rendered ineffective by the noisy focus motor for the lens. Fortunately, there is a mic input on the side of the camera, next to the USB and Mini HDMI ports, for higher quality, off camera audio recording. 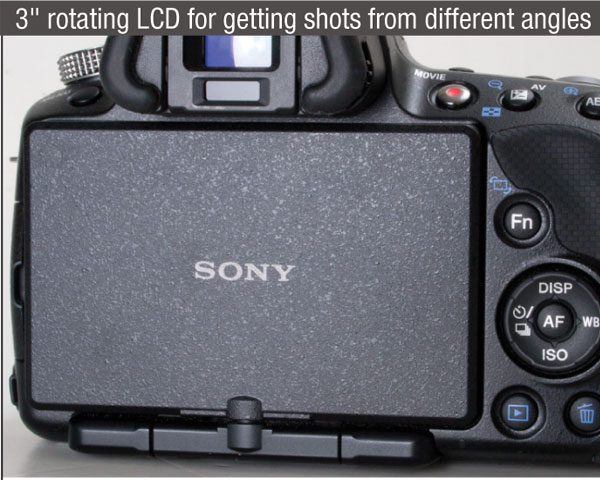 The A33 is full of features and shortcuts designed to capture better photos, with less of the post-processing hassle. An automated panorama mode and a high speed 7fps burst mode reside on the top dial. The in-camera processing of the panorama works well, and has no trouble with handheld shots, providing each shot is reasonably lined up. Behind the shutter release is a button labeled D-RANGE. This has options for a “Dynamic Range Optimizer” and “Auto HDR.” The “Dynamic Range Optimizer” compresses the highlight and shadow tones to coax out more detail in photos. The “Auto HDR” setting is a simplified version of the High Dynamic Range photo technique. It fires off 3 quick shots with a selectable 1, 2, or 3 f-stop exposure difference between each image, then combines the detail from each of the three shots into one image, simulating a wider range of tones that cannot be captured in one picture. For HDR imaging savvy photographers, this isn’t quite enough control to be as satisfying as manual control. For those unfamiliar with the process, this is a good introduction to a very fun photo technique.

None of these features would mean anything if the quality of the photographs were less than stellar. Fortunately, the pictures from the A33 are sharp, and provide vivid, accurate colors in bright and normal lighting. The Sony doesn’t quite hold up as well in low light as some of its competitors, though for the targeted consumer, its performance will be more than enough for most shooting situations.

Much like a point-and shoot camera, live view is the only mode in which the A33 operates. Because of this, the camera spends more time with the sensor active, and the LCD screen on, eating up precious battery life. For consumers used to a traditional DSLR snapping many hundreds of images, this could be a difficult trade-off. The battery life is, however, very comparable to compact interchangeable lens cameras, such as the Sony NEX, and the Panasonic G series, and any shortcomings can be solved by purchasing an extra battery.

The electronic viewfinder (EVF) itself is one of the better ones we have used. A proximity sensor below the eyepiece switches off the LCD when it detects that it is up to your eye. Features such as the on-screen level, and full range photo information in the EVF give it some distinct advantages. With that said, for still photos, it is still no replacement for the focus accuracy of an optical view finder.

The A33 is a step in the right direction for Sony, and the HDSLR industry. With an all-around easy to use approach to photos and videos, it is a less intimidating option for the new DSLR user. While it isn’t perfect, and nothing can replace a true optical viewfinder, a long list of features and a compact, lightweight form make up for the minor shortcomings.

The Sony Alpha A33 is a huge step in the right direction for HDSLRs becoming a go-to solution for almost all of our video needs.