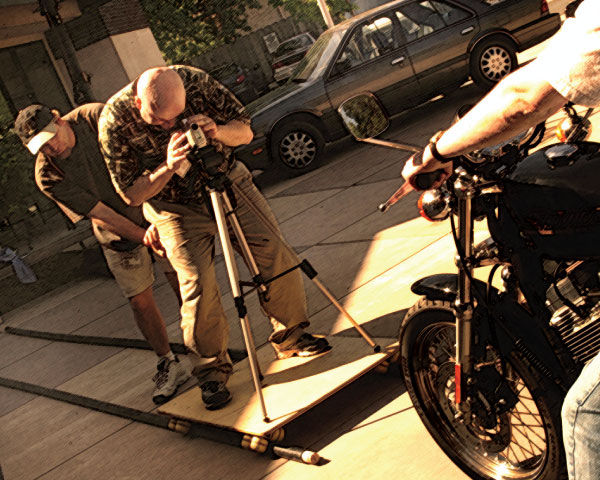 In the early days of filmmaking the camera didn’t move very much and this was for several reasons. First, no one had yet thought to put them on wheels, and secondly because directors believed that moving the camera would confuse people trying to follow the narrative. As moviemaking progressed, cameras started to move in all sorts of ways and these movements were used to add to the storytelling. Today, most major productions feature a lot of camera movement, from subtle dollying along as two characters walk down a pathway, to elaborate crane maneuvers which fly us over a scene and bring us in close to the action.

Today a moving camera is the rule, but there are notable exceptions such as Jim Jaramusch’s 1984 film Stranger Than Paradise which is shot entirely with static cameras. Let’s have a look at each of the camera movements we talked about in the August 2009 story, Basic Camera Moves, and discuss when you might use that motion to forward your story along.

Tilts can be used to show size and scale. Martin Campbell uses the tilt to excellent effect in the opening scene of the 1995 James Bond film, Goldeneye. Bond, played by Pierce Brosnan, but in this scene, doubled by stuntman Wayne Michaels, walks up to the very edge of the Verzasca hydro-electric dam in Switzerland. While Bond looks straight ahead, the camera dramatically tilts down to reveal a dizzying view of the 750 foot drop. What will our hero do? Our stomachs flutter, England’s favorite spy jumps. As he falls, a number of other cameras (six cameras total, filmed the shot,) follow his movement with downward tilts. Luckily, 007 had thought ahead and wrapped a bungee cord around his ankles, saving him from pancaking onto the rocks below, but very capable camera work ensures that we see every foot of his fall.

Panning can be used to follow action, like a football pass. But pans can also be used to lead us from one place to another, it may follow a dog as it runs across a field and then stop on the window of a building to indicate that the next scene takes place inside that room.

Zooms are the most common camera movement shots – though to call them “camera movements” is a little deceptive since the camera itself isn’t really moving, but rather the focal length of the lens is changing, bringing the audience closer to the action. Zooms can be used effectively to establish a scene – beginning with a wide shot of the Grand Canyon then zooming in to show two mountain climbers scaling the side. Zooms can also redirect our attention, zooming in on a single face in a crowd tells us that person is important and should be paid attention to. Zooming out can add context to a shot you used to confuse the viewer initially. Such as the 1929 Harold Lloyd scene from Welcome Danger which shows Lloyd reading a newspaper when a strange arm suddenly turns the page. The camera then zooms out to show that he is not holding the paper himself, but reading over another (very annoyed) man’s shoulder. 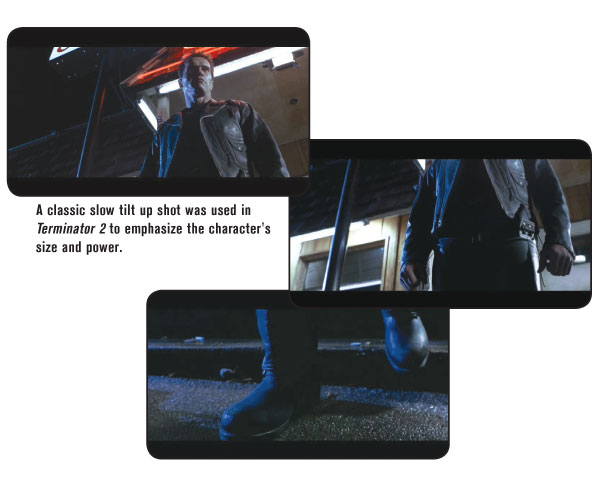 James Cameron uses a pedestal-up (or “boom-up”) to great effect in the beginning scenes of his 1991 action classic Terminator 2. The title character, played by Arnold Schwarzenegger, goes into a bar and steals the clothes of a biker. We see his boots as he steps outside and as George Throgood’s Bad to the Bone plays, the camera pedestals up so that we can see his entire outfit from his boots and ending in the trademark “Terminator” sunglasses. 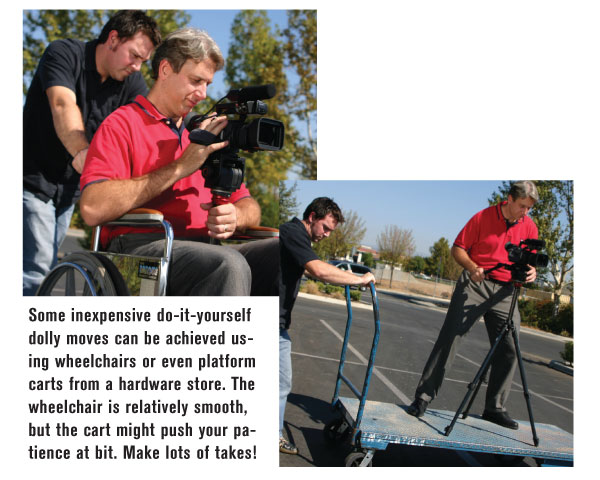 Though you can dolly down an empty hallway, dolly shots are often used to follow or lead a subject rather than to show off surroundings. You may dolly backwards as the bride and groom walk down the aisle, or you may dolly to follow two people down a sidewalk. In Hollywood, dolly shots are usually done on a track, which the camera moves across on wheels. With the advent of affordable stabilizing devices, dollying has not infrequently given way to a “follow shot” which isn’t limited to the forward and backwards motion of an actual dolly, but can follow a person as they move through a room, up stairs, and into places it would be difficult to get an actual dolly into.

Truck – To Move Alongside a Subject

Trucking is done when the subject needs to move from one place to another and you want the audience to move along with them, rather than merely watching from a distance. Think two members of a marching band having a conversation, the camera trucks along with the marching band because the conversation is important. Using a pan at this point would have the subject’s distance to the camera change over time.

Apart from the basic camera moves, there are a few fancier, less common, or stylistic ones. Each of these can be used but require a greater deal of planning, execution, and re-takes.

Handheld – To create a “You Are There” Feeling

Handheld Shooting is either done because there is no other option, such as a fast moving scene where the action is not planned out beforehand, or when you want to make the audience feel like they are part of the action. The slight wobble of hand held camera work makes us think subconsciously of documentary films and adds as “you are there” feel, making a show like The Office appear, at least subconsciously, as though it is real and not scripted.

Most likely you remember the Steadicam shot from Stanley Kubrick’s 1980 adaptation of Stephen King’s The Shining. Garrett Brown, the device’s inventor was strapped in a wheelchair with his camera mount while a series of grips, in relay, pushed the contraption around the second floor of the hotel following actor Danny Lloyd riding his Big Wheel trike. Steadicam’s and other stabilized mounts enable you to bring your camera, and therefore your audience, close in to the action without the restrictions brought about by a tripod. The camera, held steady by counterweights seems to float through the air. Good uses might be party scenes, and long shots where a character is followed through a complex environment.

Crane – To Create Movement, to Reveal Detail, to Follow 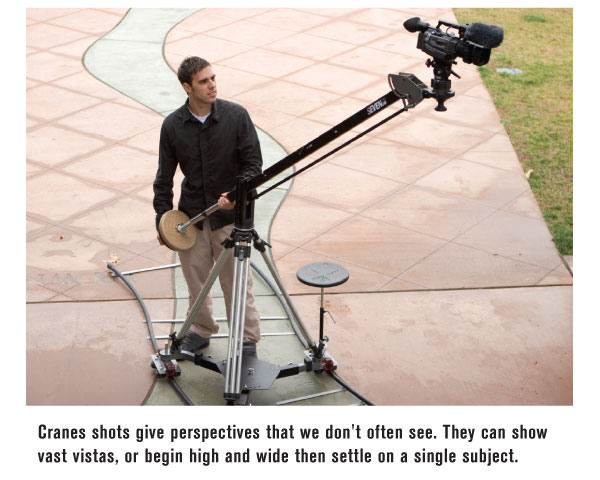 Orson Welles created the iconic crane shot in the opening of his 1958 masterpiece, Touch of Evil. The camera starts in close on a man holding a bomb, and, in a single shot, dollies behind him as he places the nefarious package in the trunk of a car, then cranes up to rooftop level as the car pulls away and continues to crane around the block, following the car. The shot, which continues, uncut, is a panoply of dollying, trucking and amazing crane work until the bomb goes off some three-and-a-half minutes later. Quentin Tarentino pays credible homage to this in his 2003 film, Kill Bill, with a tracking shot that follows Uma Thurmond through a party, craning over the roof. The crane shot gives the viewer an unusual bird’s-eye view. It can be a little unsettling, but, used properly, it’s a powerful addition to your repertoire.

One final technique which, while very rarely used, can have a great effect is the so called “Hitchcock Zoom” or “zolly” as it’s comprised of a zoom and a dolly. It’s a difficult technique because to work the two need to be exactly coordinated. The camera zooms in (or out) while the dolly goes in the opposite direction. This causes the objects in the foreground to stay the same size, but everything in the background to either shrink (zooming out) or get larger (zooming in). This can be done quickly, as Stephen Spielberg did in Jaws, where the beleaguered police chief witnesses the shark attack on young Alex Kintner or slowly as Peter Jackson does in the Fellowship of the Ring where it’s used to show that something strange and unnatural is occurring just before the hobbits see the evil black rider for the first time.

In Hollywood, pulling off a Hitchcock zoom is a multi-person endeavor that involves a camera operator, a focus-puller and one or more people operating the dolly. You’ll probably want to try it with at least two people (one operating your dolly and the other the camera) and a lot of practice. Or, if you have a smooth motorized zoom, a camera stabilizer and a lot of chutzpah, you can try it yourself. (If you do, we’d love to see it – put your results up on YouTube, Vimeo or other video sharing site and send us a link.)

While you’re watching television and movies, be aware of camera movements. When are they used? How do they contribute to the mood? Are moving shots bookended by static shots? How many moving shots do you see in a row? How does this differ between different types of productions? Do you feel that some productions have too much camera movement? Why and when? Sometimes, the movement is so subtle only the director, the DP and you, the savvy Videomaker reader, are aware of it. This is your homework from now on, every time you look at a film or video. Make every day a learning experience.