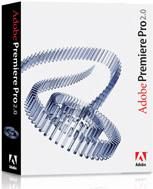 Adobe has reentered the Professional software based editing world with the new Premiere Pro 2.0; as a stand-alone program or as a tightly woven member of the Adobe Production Studio.

The programmers and engineers at Adobe have been busy since the release of Premiere Pro 1.5 about two years ago. The full number upgrade is packed with new features–many that bring Premiere Pro 2.0 into the realm of other high-end editing programs and a few that project it beyond. We don’t have room to investigate the many new changes on these pages, but we’ll look at some of the major ones.


One of the first differences experienced Premiere Pro users will notice is in the GUI (graphic user interface). The new interface wastes no desktop space and more importantly, eliminates overlapping windows. Adobe now calls these windows “panels,” which are dynamically attached to each other. Making one panel bigger, say your Timeline, makes its neighboring panels, for example the Source panel and the Program panel, shrink. This, coupled with the ability to pull panels from one frame and group them in another frame gives editors strong control of their workflow.

The most surprising, dare we say revolutionary, new addition to this upgrade is called Clip Notes. If you need to share footage with other editors and/or clients, Clip Notes is astonishing. Imagine effortlessly embedding a video clip into a PDF file for easy emailing. Now imagine the ability of the receiver to type in frame-accurate comments into this optionally password-protected document and email it back to you, the editor. You now import the Clip Notes document into your sequence and your program generates markers at the appropriate timecode locations on your timeline. We must admit, this innovation caught us by surprise.

Adobe Bridge allows editors to browse video and audio clips as well as Photoshop, Illustrator and After Effects files in one central area. Bridge not only lets one preview media such as AVI files directly in the Bridge window, but it also lets users enter a host of metadata information that makes searching for footage much easier. Organization is the name of the game on big projects so we very much welcome this functionality. Other major editing platforms take note. You can also drag media straight from Bridge into the Project window.

It’s obvious that the After Effects coders and designers have been sharing notes with the Premiere programmers, as many of the Premiere effects interfaces closely resemble the After Effects GUI. From “twirly,” triangle drop-down handles to Bzier Handles for greater key frame control; advanced effects users will surely embrace these changes. Plus, if you’re using the Production Studio, the powerful Adobe Dynamic Link enables you to share various elements between AE and Premiere Pro. For example, an animation designed in AE and imported into Premiere Pro can be used without first rendering it in AE and can be changed in AE with the changes porting over to Premiere Pro automatically. This will speed up the workflow tremendously.


We were happy to see that Premiere Pro 2.0 had greater DVD creation tools from within the editor than version 1.5. Now menus and submenus can be created, animated backgrounds and looping background audio can be added, a DVD Marker button appears in the DVD Layout interface for easy menu marking and the program ships with a number of templates; not bad. We would still prefer to author our DVDs in Encore DVD, but greater control is now available in Premiere Pro 2.0.

The New Adobe Title design layout took a bit to adjust to, but once we got accustomed to the workflow, we were titling with ease. Template style choices for quick and easy titles as well as more sophisticated tools should please beginner through advanced users without needing to leave Premiere for most titles.

Conforming audio has been a bit of a sore issue with Premiere users. 2.0 gives editors more, though not complete, control on what gets conformed, where the conformed and original media files live and new abilities to manage them. The conforming process was introduced to give editors more latitude with their audio files but having more say in this process is welcome.

Premiere’s audio editing interface solves most of the audio needs of a video editor, but for those who need deeper fine-tuning control, audio clips can be sent to Adobe Audition with a simple menu pull-down command.

Adobe Media Encoder now comes with the ability to output Flash video (FLV), which makes sense as Adobe recently made the hefty purchase of Macromedia. If one considers that 98% of desktops around the world currently have Flash Player installed (according to Adobe,) the overall high quality of the compression and the ability to embed Flash Video directly into a Web page makes this a great feature.


For our high-end producers, Premiere Pro now enables HD-SDI, SD-SDI as well as HDV capture presets. SDI capture requires the AJA Xena HS system card ($990). Premiere Pro 2.0 edits HDV footage natively (720p, 1080/60i and 1080/50i), negating the need for plug-ins or third party intermediary software. Now the investment in one of these higher-end prosumer cameras that not only shoots standard definition and HDV but also uncompressed HD is starting to look like a reasonable investment in the future. We should note here that if you choose to go the HDV or uncompressed route, you are moving into little explored territory and you should be in possession of one of the fastest processing computers with 1GB RAM minimum (see Tech Specs). You should also enjoy technical challenges.

This is just the beginning of Premiere’s new high-end functionalities. Most of these advanced film tools are beyond what the common Videomaker reader and editor will use but quickly, here they are: Feet+Frames timecode conversion, 2K and 4K (up to 4096×4096 pixels) support for online feature-film work and professional VTR device control (RS-422 and RS-232). We did not test these functionalities, but they are included if you are in need of them.

The Competition in the Pro Arena is Heating Up


Some changes in Adobe Premiere Pro 2.0 simply follow Premiere’s peers, such as multi-cam editing, Tape Name Change (a prompt when inserting a new tape while capturing footage), and finally a professional 3-way color corrector. Other changes are improvements to previous innovations such as changes to the audio conforming process and updates to Bridge. Further changes are simply revolutionary such as Clip Notes.

Time will tell if all of these major new innovations work smoothly in the down and dirty workflow of a huge project, and we’re excited to take that journey with the new Premiere Pro. Version 2.0 looks to be quite a promising program, indeed.


Premiere Pro 2.0 is a serious high-end video software contender with exciting innovation and strong integration with the Adobe family.