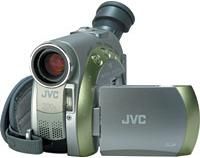 Like many of them, the GR-D200 sports FireWire, USB and analog video outputs, making it easy to dump video and stills to computers and to copy video to VCRs. A one (1.33) megapixel CCD attempts to get the most out of this little camera’s light capturing abilities. We found this cam’s scalable flash to be a nice addition.

The GR-D200 has a very solid feel, but it is not the most comfortable camera to operate. People with small hands will have an easier time with it. The rest of us will have to make sure our pinkies don’t drift in front of the lens. Also, the controls for zoom and snapshot are a bit too far to the rear of the camera for some. We had better results holding the GR-D200 in both palms than with a hand under the provided strap. None of these are terribly uncommon issues with ultra-small camcorders.

The nice-looking semi-circular color band on the LCD side of the camcorder carries the dual-function control buttons on its crest. In VCR playback mode, they control transport functions and in manual video record mode they select exposure and focus settings. The menu and its navigation controls are under the 2.5-inch LCD along with the memory card slot and the video/still selector switch. We liked the placement of these controls and found them easy to operate. The back of the camera has the small and proprietary analog A/V input/output jack. You won’t find the respective cable at the local electronics store, so don’t lose the one that comes with the camera.

In a room with several video professionals, we competed to see if we could find the FireWire and USB ports without looking at the manual. Embarrassment ensued as minutes (literally) ticked by. Finally, we found the jacks under a cute and cleverly disguised plastic wedge above the LCD, just below the transport controls, with no labeling to guide the user. It isn’t a bad design; in fact it is quite elegant; it’s just hard to find the first time. One problem, however, is that the FireWire cable partially obscures the LCD when plugged in.

As with too many camcorders today, the tape is loaded into the GR-D200 from its bottom and you must remove the camcorder from your tripod and tripod shoe in order to change tapes.

As with most small camcorders with small lenses and small CCDs, the video was less than stellar in low-light situations, with some visible noise and lack of definition. With plenty of light, the measured horizontal resolution was very good, but the image was not overly sharp. We were impressed with the ability of the GR-D200’s lens to focus on macro images at extremely short range with ample light and contrast. The zoom function of the 10x optics was smooth and motor noise was minimal in the in-camera mike. The menu setting for the zoom did not make it clear when digital zooming kicked in.

Consumer camcorders have had a fake widescreen mode for many years. This is where the camera merely adds letterboxing to the top and bottom of the screen, throwing away image data. We think you might as well just tape cardboard letter boxing to your TV to get the same effect. A few cameras have true anamorphic 16:9 widescreen capabilities, and the GR-D200 is one of them. Sort of. Actually, it has three wide modes: a fake one, a Squeeze mode and D. Wide (which probably means Digital Wide). The Squeeze mode is 16:9 anamorphic, but it doesn’t increase the width of the shot at all. Even in the normal mode, the camera has a wide 39-degree field of view. In the D. Wide mode, this increases to 48-degrees, but the video is still 4:3 and not 16:9 widescreen. This means that you don’t have to squeeze in too close to Uncle Stinky during the family reunion shot in the dining room.

The GR-D200 has oodles of digital playback and record modes for the creative novice who likes to edit effects in the camera. One of the best features that JVC built into the GR-D200 is Random Assemble Editing (RAE). This lets the user program an edit of up to eight cuts to a supported VCR. Still images were as good as we’ve seen on a video camera at 1,600 x 1,200. In the end, what is going to sell this camera is the point and shoot convenience of it. For example, the camera turns on when you open the LCD or extend the viewfinder (like other newer JVC models). Another small but well-designed feature is the very small and light DC power adapter. As an automatic point-and-shooter, the GR-D200 is a stylish and solidly built camera that will go anywhere.