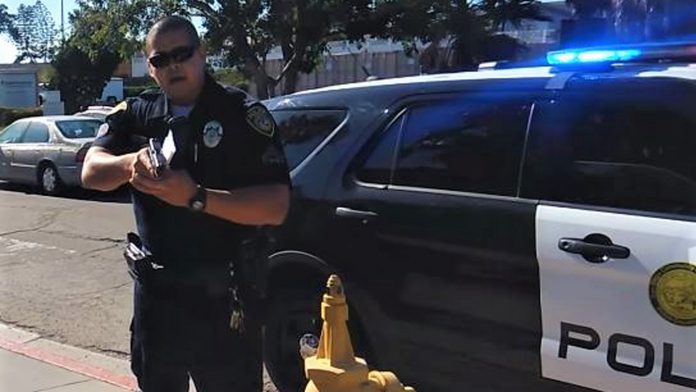 There’s a video circling YouTube that shows a MESA College police officer unholstering his gun and pointing it a videographer after asking him to put his camera down. The video has landed the officer with internal investigation while he’s on paid leave.

Last Wednesday, about a block away from the Mesa College campus on Armstrong Place in San Diego, CA, a videographer, who runs a YouTube channel called The California Citizens Watch, approached campus officer James Everette while he was in the middle of a routine traffic stop.

Luckily, no one was harmed in this situation; tensions resolved when the backup Everette called for showed up.

So, who is at fault here?

“The fact that a person takes a photograph or makes an audio or video recording of a public officer or peace officer, while the officer is in a public place or the person taking the picture or making the recording is in a place he or she has the right to be, does not constitute, in and of itself, a violation of subdivision (a), nor does it constitute reasonable suspicion to detain the person or probable cause to arrest the person.”

The videographer had every right to be filming Everette, so when Everette asked him to put down his camera, he was violating California law. While the videographer wasn’t very cooperative with Everette in the first few seconds of their encounter, he didn’t become hostile until Everette pulled his weapon.

For those that support the videographer in this situation, they say there was no clear and present danger that would justify Everette in pulling out his gun and pointing it at the videographer.

In defense of Officer Everette, police officers walk into a lot of potentially dangerous situations and have to be ready if things do happen to take a turn for the worst. With this in mind, officers understandably feel vulnerable on duty. This can lead to bad decisions in the heat of the moment.

Regardless, it looks like Officer Everette acted in ways he shouldn’t have

In the video, Officer Everette wasn’t faced with any imitate threat to his life, so he had no authority to point his gun at the videographer. It seems like Everette used his gun to threaten the videographer to make him do what he wanted him to do, rather than to protect himself from danger.

Citizens have the legal right to document police officers, whether that be through photography or videography, as a means to keep the police in line through the system of checks and balances. Whether or not officer Everette wrongly violated the videographer’s rights is up to the Justice and Internal Affairs department, but from the looks of the video, it seems he did and that can’t be accepted.

However, this affair can’t be solely determined by a YouTube video, so we hope this investigation will be able to get to the bottom of this situation and come to a just ruling.