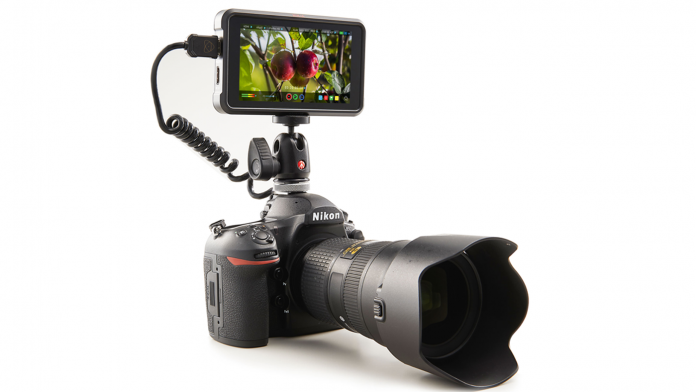 Congratulations Atomos! The Ninja V is our pick for Best Field Monitor/Recorder of NAB 2018!

Many of Atomos' 7-inch monitors and external recorders can be difficult to mount onto smaller cameras models simply because they're too large and heavy. Well, Atomos has just revealed at NAB that they are bringing back the popular 5-inch size from its Ninja 5" and applying it to the Ninja V. The Ninja V is even more compact than the Ninja 5” at only 3.5 cm thick, and it has a number of features taken from the Shogun Inferno.

The Ninja V is a 5-inch 4Kp60 10-bit HDR daylight viewable 1000nit portable monitor/recorder. It’s built with an aluminum body for greater durability, but it still only weighs 350g. It’s screen is viewable in daylight thanks to the “near edge-to-edge anti-reflection screen,” according to Atomos.

This small Ninja can record up to 4Kp60 10-bit HDR video.

You can record up to 4Kp60 10-bit HDR video directly from your camera’s sensor over HDMI 2.0 with the Ninja V. The video can be stored in ProRes or DNxHR on SSD drives. Also, the Ninja evades internal compression and record time limits.

This monitor/recorder displays 10+ stops of dynamic range in real time from Log/ PQ/HLG signals. The display can be calibrated with playout to HDR or SDR TVs.

Audio can be input digitally from the camera.

With the Ninja V can be input directly from the camera digitally through HDMI. It can also be fed in analogue through a stereo 3.5mm line/mic socket.

The Ninja V is open to expansion.

Atomos designed the Ninja V with a in-built modular expansion slot so users can expand on its features. Atomos says that expansion modules will dock onto the battery slot of the Ninja V and offer “advanced features” like continuous power. The company says that bi-directional high speed video, audio and power are available.