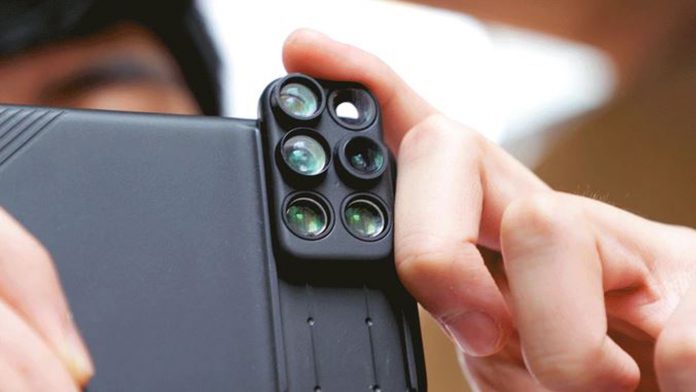 ShiftCam has announced the successor to their popular ShiftCam iPhone case, the ShiftCam 2.0. For a quick description, ShiftCam cases include a shift mechanism that allows you to slide different lenses across the case and use them in conjunction with the iPhone’s camera. You can see how it works in the video below:

The basic ShiftCam 2.0 system offers six different lenses for the iPhone 7+, iPhone 8+ and iPhone X. The iPhone 7/8 edition has a single row of 4 lenses instead of a double row of 6.

The ShiftCam 2.0 doubles the number of supported lenses when compared to its predecessor.

While the original ShiftCam supported just six different lenses, the ShiftCam 2.0 doubles that number. You'll still get six lenses with the slidable travel set, but you can now remove that set to make room for other lens options. The additional 6 lenses come from a new front-facing wide angle adapter and 5 interchangeable Pro Lenses. That Pro lineup includes a 180° fisheye, 20x macro, 10x macro, 2x telephoto, and 120° wide-angle.

ShiftCam reports that they have upgraded the ShiftCam’s design to have an improved slide-and-click mechanism. Also, they claim they’ve made the case more “pocket-friendly” with a ergonomic design that features a magnetic lens cap.

Currently, ShiftCam is running a Kickstater campaign to raise funds for the ShiftCam 2.0 — they were able to reach their financial goal of about 12,00 dollars in just two hours. With 21 days still to go, if a pledger pledges about 49 dollars will get a ShiftCam 2.0 travel set, which includes the case, wide-angle front lens, and 6-in-1 travel set. If the pledger pledges 98 dollars, one of the Pro Lenses will be thrown into the order. If a pledger wants all of the 12 lenses, that’s going to cost 347 dollars.

You can learn more about the ShiftCam 2.0 at Shiftcam.com.