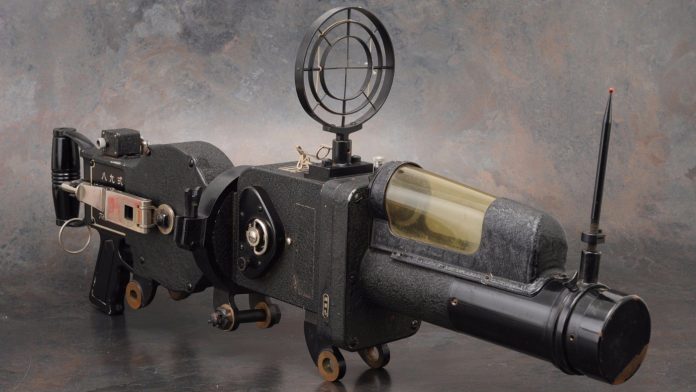 Yes; you read that right. WWII era militaries actually had access to machine gun cameras. It was before small digital cameras were invented, so militaries actually mounted these big film camera onto their fighter planes. The super rare camera you see above is currently on eBay right now for $4,499.

This type of camera was developed in Japan back during the WWII era and is more specifically called a Konishoruko Rokuoh-Sha Type 89. These large film cameras were used all around the world and were mounted onto fighter planes that were used in both training exercises and actual combat. The cameras that were used in battle were used to confirm kills for pilots and the training cameras were used to see how accurate a pilot was without having to waste any ammunition.

“A multi-purpose training device, this ‘gun’ is effectively a camera mounted in an oversized housing, suitable for installation in a wing mount or waist-gun emplacement,” writes International Military Antiques. “When the trigger is pulled, the camera runs, with footage being taken of what the gun is aimed at, as well as an optional stopwatch; after landing, the film can be analyzed by the trainers for proper lead and burst timing.”

The manufacturer of these cameras, Konishoruko, is still around today, but they don’t go by that name anymore. They renamed themselves to Konica and went onto merge with Minolta in 2003, now currently being called Konica Minolta. They’re a pretty well-known Japanese brand.

And even after all of these years, this eBay Konishoruko Rokuoh-Sha Type 89 being sold on is still in really good condition.

“The camera is in overall excellent condition, especially considering it was used during war-time,” eBay seller westborncam1 writes in description section. “This has been tested to my best ability, and everything seems to check out good: The winder holds firm tension and releases when fired. The shutter can be heard and film transport responds properly.”

The seller’s also throwing in a clamp and mounting bracket used to mount the camera to fighter planes, four film canisters with three empty 35mm film spools, a quick release cable, a couple of other various parts and a chest to carry the camera around safely.

So, if you’re willing to pay $4,499 for this WWII camera, you can check it out on its eBay page. As for the rest of us, we’ll just gaze in appreciation at this slice of camera history.