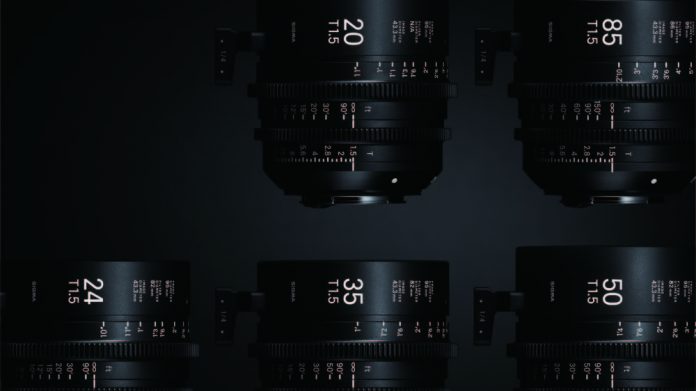 Last year, Videomaker reported on Sigma’s plans to expand into the cinema lens market. Now, at NAB this week, Sigma has announced new details about the Sigma Cine Lens line.
Sigma’s new Cine Lens line includes both High Speed Zoom cine lenses and High Speed Cine Primes. The Zoom lenses feature a constant aperture of T2 and covering Super 35 image sensors, with the exception of the 24-35, which is full frame. The Primes offer maximum apertures of T2 or T1.5 depending on the focal length and cover a full frame image sensor.[image:blog_post:64102]
All Sigma’s Cine Lenses are weather proofed and feature luminous paint marking, 180-degree focus rotation and standardized gear positions and front diameters. They also offer manual linear iris control.
In addition to the Sigma Cine High Speed Zoom 18-35mm T2 and 50-100mm T2 lenses that became available at the end of 2016 for $4,000, as of May 2017, the E and EF mount versions of Sigma’s Cine T1.5 Prime Lens line will be available in focal lengths ranging from 20mm to 85mm for a retail price of $3,500. A PL mount option for these lenses will become available in June.[image:blog_post:64099][image:blog_post:64103]
Also announced at NAB this week are two new High Speed Cine Primes: the 14mm T2 and the 135mm T2. Pricing has not yet been announced, but these two new lenses are expected to start shipping in July of 2017.
For more information, visit sigmaphoto.comhttp://sigmaphoto.com.