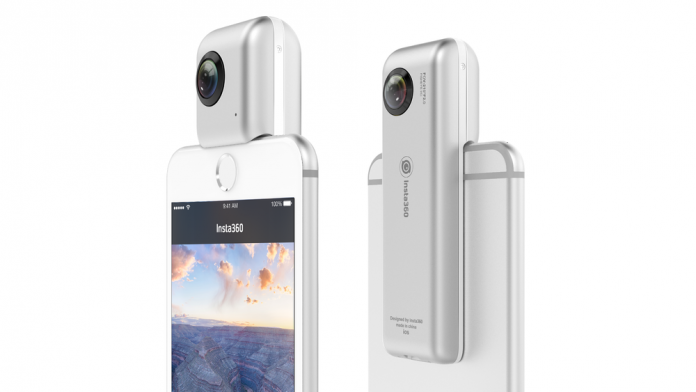 New to the spherical  video space this week is the Insta360 Nano, a dual-lens spherical video camera that clips directly to your iPhone for real-time previewing, sharing, and even spherical livestreaming.
“We expect the Insta360 Nano to blast the market for 360-degree cameras wide open. The Nano sets a new price point for virtual reality: at under $200, it brings the ability to live stream and share 360-degree VR movies to everyone.” said Liu Jingkang, founder and CEO of Arashi Vision. [image:blog_post:61523]
Insta360 Nano claims the title as the world’s first HD camera capable of livestreaming high definition spherical video and panoramic stills directly from an iPhone. Two 210-degree fisheye lenses capture video in 3K HD (3040 x 1520) at 30 frames per second. Recorded images are stored to a microSD card with up to a 64GB capacity.
The free Insta360 Nano app automatically activates when the camera is connected to an iPhone via the phone’s lighting connection. From the app, spherical video can be streamed live to Facebook or YouTube, while recorded videos and stills can be shared directly to Facebook, Twitter or WeChat.
http://youtu.be/nMbdSV12ev4
This Apple MFi-approved camera is compatible with the latest iPhones, including iPhone 6, 6 Plus, 6s or 6s Plus, but it can also operate without a smartphone attached — so you don’t have to strap your iPhone to your helmet in order to get that POV shot documenting your race down the mountain in 360 degrees.[image:blog_post:61522]
An added perk, for those not already in possession of a VR view, the Insta360 packaging can be converted into a Google Cardboard VR viewer.
The Insta360 Nano is available now on Amazon US for $199 and available for pre-order on Amazon UK.