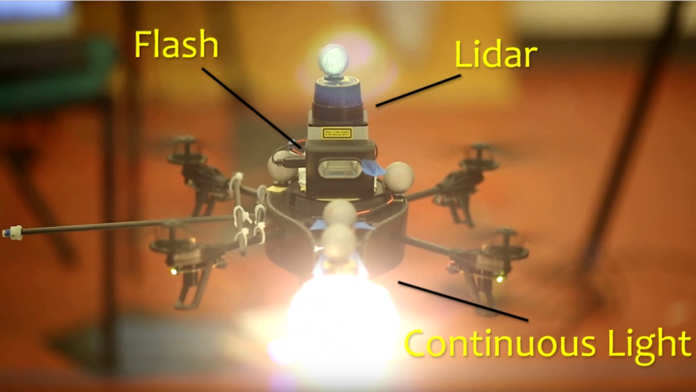 With all the talk about drones with cameras attached, what about providing the light needed for using them? Researchers at MIT (Massachusetts Institute of Technology) and Cornell University see autonomous vehicles as lighting assistants; having a bevy of free-floating robots, each with their own built-in light source, able to move freely around a space to direct lighting to where the photographer wants it.

The prototype system was introduced by Manohar Srikanth, Senior Researcher at Nokia, who worked on the system as a graduate student and postdoc at MIT, along with Frédo Durand, MIT Professor of Computer Science and Engineering and Cornells Kavita Bala, who also did her PhD at MIT. Rim lighting was chosen because of its difficult effect, wherein only the edge of the subject is strongly lit. Srikanth points out that the effect on a person is very sensitive to the position of the light: If you move the light, say, by a foot, your appearance changes dramatically, he says.

The system employs an autonomous miniature helicopter. The photographer indicates the direction as to where the rim light should be coming from and the helicopter then flies to that position at the side of the subject. The specification of the width of the rim  done as a percentage of the lights initial value  is then dialed in, with this process repeated until the desired effect can be seen. In essence the system functions by examining the amount of light hitting the subject and where the drone needs to be positioned mid-air so as to be able to make any necessary lighting adjustments. Once this has been set, the system automatically compensates for the photographers movements relative to the subject, and maintains the specified rim width.

The camera is producing an image about 20 times a second, which is not being stored to its own memory card, and is being transmitted instead to a computer running the control algorithm. The algorithm takes care of evaluating/maintaining the rim width and adjusting the drones position accordingly.

The presentation was made at the International Symposium on Computational Aesthetics in Graphics, Visualization, and Imaging in Istanbul, Turkey.