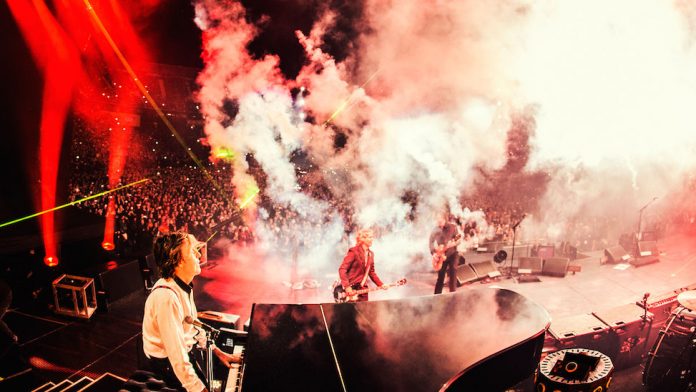 Virtual Reality earns its concert chops with the appearance of Sir Paul McCartney from last year’s concert at San Francisco’s Candlestick Park. Although some 70,000 fans were able to watch the legendary musician live from the stands, a free iOS app created by Jaunt is now bringing a new visual experience — letting those with iPhones and iPads view through an iOS app the former Beatle’s performance of “Live and Let Die” in a 360-degree virtual environment.

The app enables the viewer to be put right into the concert — it is all live-action and devoid of any computer imagery or trickery that would render what is seen as unreal. Through the Apple device, the viewer is able to see the performance from any direction they should choose: from within the crowd facing the stage, from on the stage, backstage behind the musicians and even up close and right next to Sir Paul himself as he performs.

The concert was recorded by Jaunt using proprietary 360-degree, stereoscopic 3D cameras and 3D sound field microphones, with the app enabling both a stereo 3D effect combined with immersive audio to be experienced by the viewer. The technology was first demonstrated on the VR Google Cardboard and Oculus Rift devices late last year and represents their first publicly released cinematic VR experience.

CEO of Jaunt, Jens Christensen, points out that their technology opens up access to events, such as the Candlestick concert, to many more people than just those who were in attendance, adding that this new medium for entertainment that is just the first step of “a broader mission to bring viewers immersive access to the latest concerts, movies, sporting events and more through virtual reality."