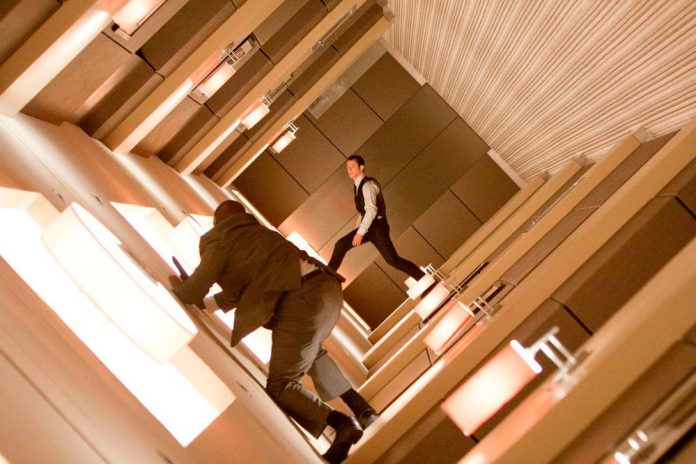 Have you ever wondered what it would be like to lay on the floor and roll up the walls and onto the ceiling? Or maybe take a stroll around the room, quite literally, stepping on the furniture, climbing up the walls and past the ceiling fan? It’s normally been the thing of big budget Hollywood effects shops to make this happen. It’s a staple of horror films and most notably an effect that was seen in the 2010’s Inception, characterized by a rotating hallway.

It’s an effect that most home filmmakers would deem impossible. Not true. Videographer Justin Fredrick Clark, with a crew of friends, were able to build a rotating set for $350. The set is basically a suspended box, outfitted like a room with one open side wall. The cubed set rotates around a single axis that virtually runs from the center of the open side through the center of the back set wall. The rotation is achieved by placing two hubs on the axis, one on a brace across the face of the open wall, and the other hub aligned on this axis on the back side of the back wall. The entire set is then hoisted and suspended on these two hubs. A camera is locked down to a fixed position on the open wall as the crew rotates the set by hand. Of course any furniture has to be locked down on set or it will appear to rotate around the room with the talent.

This remarkable contraption and its construction is captured in glorious time-lapse. It’s truly a brilliant design and remarkable work. If you’re looking for a way to outdo your friends on their halloween videos this year, maybe you can try your hand at building a rotating room. It’d make the perfect play for a poltergeist thriller.