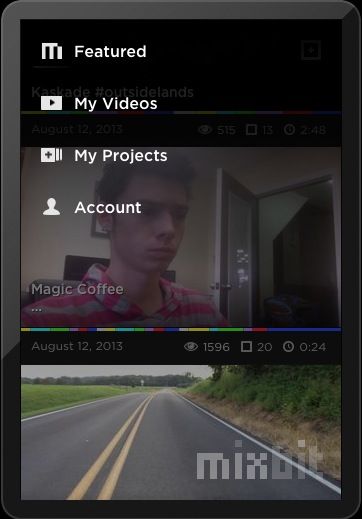 MixBit is a newest video app on the market. But does it stack up against Vine or Instagram video? There have been rumors that YouTube founders Chad Hurley and Steve Chen were working on a project that might compete with YouTube. That project has been revealed to be MixBit.

MixBit is an app that allows users to record video and collaborate with it’s users. The interface is familiar to Vine and Instagram. You tap on the screen to record video and release to stop. You can record “bits” up to 15 seconds in length and can “mix” a project up to one hour in length.

What makes this app stand out from Vine and Instagram video are the editing features. You can edit the length of your clips down to your liking and import existing pictures and videos from your camera roll. Meaning you don’t have to be in the app in order to record your projects, which has been a complaint of Vine and Instagram users.

MixBit also encourages collaboration among it’s users. Any footage uploaded can be mixed by other users. They do this all while allowing users to still own their upload content.

The app is currently only available for iOS devices, but MicBit's blog says an Android version is to follow as early as September of this year.

Many are wondering if this app will compete with Vine, Instagram video, or even YouTube. Though I can see why the app invites the comparison to such platforms, I don’t think it’s a contender. Both Vine and Instagram are social networks. People have profiles to upload and share content, whereas MixBit does not. When you upload video, you do so anonymously.

You can share video through twitter and facebook but not YouTube or Vimeo. This is a missed opportunity, since both platforms have proven successful with hosting longer content. The biggest complaint seen from users is that there is no way for you to export a final product of your MixBit. The individual clips are saved to your phone but your final Mix cannot be saved.

Overall, MixBit is not the Vine or Instagram competitor many thought it would be. Part of what makes Vine and Instagram successful is it’s bite sized content. Watching a quick 7-15 second long video is one thing but longer content is best viewed on platforms such as YouTube or Vimeo.

However, if viewed as a video editor rather than a micro video social network, MixBit just might be be the quickest and easiest mobile video editing app out there. The only thing that is really holding it back from being the best is having a way to save or export your final product. With an export feature, MixBit could compete with other video editing apps like Montaj,Viddy, or even iMovie.

Instead of being a competitor, MixBit should work with YouTube or Vimeo since both lack a strong mobile editor. MixBit has potential but is not the video app you need. Yet.

Overall, MixBit is not the Vine or Instagram competitor many thought it would be. However, if viewed as a video editor rather than a micro video social network, MixBit just might be be the quickest and easiest mobile video editing app out there.

?Ricky Anderson II has been making online videos since 2006. He is a writer, comedian, and video editor residing in Fort Worth,TX