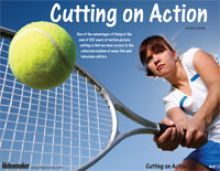 We at Videomaker are always happy when we see young people experimenting with video.  We saw some of Dara Flynn's videos on the Circle of Light YouTube channel, including the short film On the Run.  On the Run is still the work of a learning video creator, so it's not perfect: The lighting is a little uneven and some of the sound is a little muffled, but it manages to tell an interesting and engaging story in just a few minutes with very little dialogue.  Check it out to see how one young auteur makes good use of music and pacing to tell a story in mostly pantomime.  We especially enjoyed the use of slow motion during the climactic chase; we felt like it helped give a sense of urgency and danger to Experiment 16's escape from the lab of the sinister Dr. Matter.  Dara's quick cuts help to sell this little film as both a mystery and an action sequence.

Dara is currently planning a second and possibly a third part to On the Run.  Inspired by Videomaker's Cutting on the Action video, Dara decided to make a fast-paced video to help practice this technique.

"On day one of filming we filmed the chase scene and the punishment scenes," said Dara. " At the time, we just knew it was about a boy who was escaping from somewhere. Then, I realised that there could be a lot more story to tell. So, on Day 2 we decided to film the lab scenes and the footage of Experiment 16 being kidnapped. So we essentially filmed the movie back-to-front. It took a while coming up with the name, though."

Dara's friends Luke and Lucas star as the unlucky Experiment 16 and his captor Dr. Matter respectively.

"[Luke] has experience with my annoying ways of yelling 'Cut! Can we film that entire long sprint again from a different angle?'" said Dara. "Lucas wants to be a scientist when he's older so had a lot of equipment we could use. He also had an interest in filming which let us help each other out with planning out the scenes. I found that helped me a lot to have people helping me decide rather than just me."

Do you have a video that you'd like to share with Videomaker? Leave a comment and we'll check it out! If it demonstrates a technique that can help other videographers and filmmakers, you might even be featured in an up-coming blog.