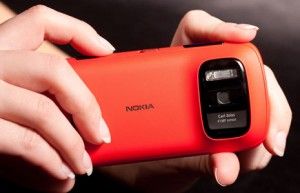 Tomorrow kicks off CTIA Wireless 2012, and while this show isn't one that Videomaker normally covers, more and more we're seeing the video industry embracing mobile technology. It seems like many consumers would rather shoot video straight from their phones rather than mess with a dedicated camcorder. If that's where the industry's headed, what does it mean for those of us that want to be a little more creative with our video? Fortunately, we we haven't been forgotten.The simple fact is cameras on consumer smartphones are getting more sophisticated. Unsurprisingly, there are a few phones being showcased this year which are really pushing the technology forward.

The first worth mentioning is the Nokia 808 PureView, which boasts a jaw dropping 41 megapixel camera. Now, I know what you're thinking, megapixel count doesn't mean jack. It's true! The new Nikon D4 only has 16.2 MP and it's one of the most revered cameras in the industry. High megapixel count usually means extreme low light noise. However, while the high megapixel count may not mean much for still shooters, it looks like the potential for high quality 1080p video is there. The lens itself is co-designed by Carl Zeiss, which isdefinitelya good sign. Nokia is claiming the 808 PureView has the best optics currently in any smartphone. We'll withhold judgement until we see some independently shotfootage.

[image:blog_post:12828]Optics aside, we'll be keeping our eyes peeled for interesting new video apps. The real draw for shooting video on a smartphone is the ability to edit or alter the video with software and send it to the web right away. The amazing success of Instragram for still photos is proof enough of that. Now we have apps like Viddy, which some are calling Instagram for video. I believe video production is experiencing a renascence of sorts. While mobile phone cameras are still far from ideal, that fact is easily made up for by the emergence of mobile editing and effects. Similarly, while they're not quite as sexy, we can't wait to see what CTIA brings us in terms of low cost apps and accessories. Keep an eye on Videomaker.com for news from CTIA Wireless 2012.