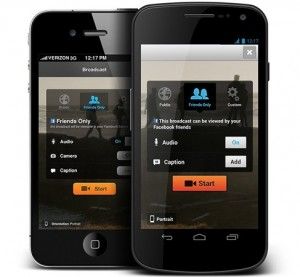 [image:blog_post:12823] While livestreaming from a mobile device might not necessarily be a new phenomenon, no one hasimplementedquite as simple a way of doing it as Color, a new mobile app developed by Lalaco-founderBill Nguyen and Verizon. The app makes streaming video footage from your mobile phone over an LTE connection extremely easy.

From the demo we saw, once inside the application, starting a broadcast can be as simple as two taps. As soon as you hit start, your friends on Facebook will get a notification that you're broadcasting live. You can select who can see the stream, and even send it out for the entire world to see. Broadcasts are currently limited to thirty second apiece, but we expect to see the limited duration to lengthen over time.