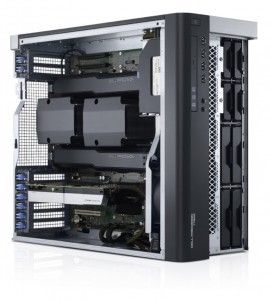 Today Dell is announcing it's new line of performance workstations, and we at Videomaker were lucky enough to get a Precision T7600 in for an early look. Even before firing it up, it's clear that this workstation was built to work. If you're getting a Mac Pro vibe you're not alone. The carved mesh front and rectangular top handle is reminiscent of that iconic look, but don't let its looks fool you. Dell has pushed functional design to new levels with the T7600, by putting user convenience at the forefront.

Before I continue, I should mention that this shouldn't be considered a review. That will come later as we have more opportunity to put the T7600 through it's paces. Rather, this post is intended as a first impressions, or box-opening. One thing you'll notice about the T7600 is that Dell wants you to be able to easily upgrade it. One of the most common upgrades a user will do is adding or replacing hard drives, and doing so in this machine looks to be easier than just about any I've seen. The front of the case swings open to reveal room for up to eight cold-swap 2.5 or four 3.5 hard drives. Hard drives require no tools to install in the T7600, sliding straight into and out of the slots as needed. If security is an issue, never fear. Inside the case is a locking switch which allows or disallows access to the hard drives by locking front door of the chassis.

[image:blog_post:12851]Inside, we found a refreshing lack of cables (there are a few, but they're mostly tucked away and are quite unobtrusive). Access to ram, expansion slots, or two CPU slots is simple. Like the the hard drives in the front, the power supply slides in and out of a slot from the back of the chassis, again, with no mess of cables in sight. Making the power supply easy to change is a nice feature, as I've personally had to replace power supplies more frequently than just about any other component. For added convenience, the handle itself on the power supply turns green when the computer is powered on and, according to documentation, turns red should it go bad. Let's hope we never see it, but should it happen, troubleshooting a dead computer will end up being a lot easier and less stressful. Finally, the specs on the T7600 are quite impressive. We can't wait to fire this puppy up and put it to the test! Keep an eye out for a full review soon.

Storage: Up to four 3.5" or eight 2.5" (four in 5.25" bay) internal SATA or SAS hard drives. Additional add-in controller required to reach 6.0Gb/s speeds for drives that are 6.0Gb/s capable