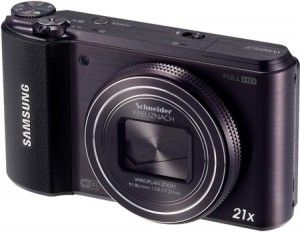 Samsung has been impressing us lately at CES. While it seems like a lot of other companies are slowly doing less and less at CES, Samsung has been doing more and more. An example of this is Samsung's newest Wi-Fi enabled cameras the WB850F, WB150F, and the ST200F. Unlike many other cameras that only allow you to share your video and photos on the cloud, Samsung's SMART technology on these cameras allows you to back up to a hard drive as soon as shooting is done – all without hooking up cables to your computer.

In conjunction with this, Samsung is also offering free storage space from Samsung's AllShare Play and Microsoft's Sky Drive so that you can get your photos from anywhere. We're not exactly sure why you'd need this (especially with smartphones so readily available) but Samsung has also added the ability to pull maps up on your camera and has a digital compass to tell them how far they are from certain locations. I'm not sure this is a selling point for me but you never know what people might need on a phone so why not?

As for getting close to a subject, Samsung included an impressive 21X optical zoom on the WB850F, a 18X zoom on the WB150F, and a 10X zoom on the ST200F. Better yet, the WB850F has a backside illuminated sensor , meaning it takes the image from the back of the chip instead of the front, which should reduce image noise and distortion.

All of the cameras come with some proprietary software from Samsung that we won't go into but be assured that whether you like it or not…it's there. The WB850F will have a 16 megapixel sensor, 1080p video, and simultaneous still and video capture all for $379. The WB150F will sport a 14 megapixel sensor and 1080p video recording all for $229. Lastly, the ST200F will shoot at 16 megapixels at 720p and will cost $199.