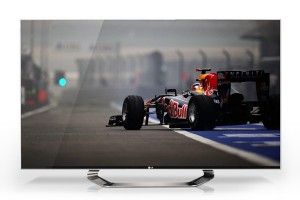 LG's at it again at this year's CES by showing off their new lineup of televisions with small bezels and big screens. Their new models, the LM9600, LM8500, LM7600, and LM6700 all have bezels as small as 5mm and a chassis that's only 4mm thick. Some of the models are as large as 55 inches, giving viewers plenty of real estate to look at. This means that due to it's thickness, the television could easily be put on a wall without making your living space even smaller than it already is.

In addition, you'll be able to see more of the 1920×1080 goodness than most people ever will on their televisions. Of course, LG didn't stop there. They also included a dual-core processor to help with load speeds and voice recognition in their LM9600 and LM8600 models. Speaking of voice recognition, LG will be including a technology called Magic Remote that they hope will simplify navigation by allowing voice recognition, a selection wheel, Magic Gesture, and Pointing.

In addition, the television will have a built-in WiFi receiver in order to make it possible to view Google TV right on the television. LG will include a new remote that has a QWERTY keyboard so that you can surf the web using HTML5. Each of LG's TVs also incredibly includes the ability to display 3D content passively. This means no more crazy shutter glasses that can be difficult to power and to sync with your television, making this 3D experience as close to what you get in the movies as possible.

This 3D ability also allows LG to have two full screen games on the television at the same time. If one player wears special polarized lenses and the other does not, the television can display two full screen versions of any game, making "screen peeking" a thing of the past. Of course with 4K televisions right around the corner, is this television a smart buy? We'll let you figure that one out but one thing's for sure: LG has finally figured out the best way to view 3D content on a television which makes their line of HDTVs worth checking out.