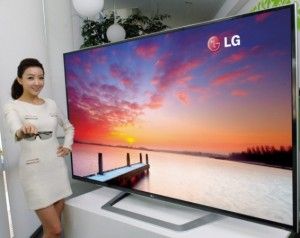 As most of our avid readers know, Videomaker has faithfully scoured the CES floor to find the world's most interesting products to write home to you all about. This year will be no exception. In an odd twist of the norm, LG just unveiled what might be the world's largest 4K 3D television at a whopping 84 inches.

It's hard to imagine that there would be some other television revealed at CES this year that could match the specs and size of this television but be assured that if there is, we'll be one of the first to report it right here on our blog next week. As of right now, there are few details about what this television can do, but we can guess that the price for such a bohemoth will likely cost more than the average person makes in an entire years worth of salary.

What we do know is that this television will feature LG's Smart TV functionality which includes access to various 3D movies and over 1,200 apps. Lest you get confused about what 4K exactly means, LG has already told us that their television will display images at 3840×2160 pixels. Not exactly a true 4K picture but still double what we usually get on our 1080 televisions. Of course you may be asking how much 4K really improves the television viewing experience.

I can tell you as someone who's personally seen a 4K television and a 1080 television side to side that the extra pixels are definitely worth it. Even so, there is no infrastructure currently in place for television stations to broadcast television at 4K resolutions. That will likely be a long time coming especially since most stations have just completed their move to HD content and will probably be resistant to changing things all over again. Also, you'll be hard pressed to find any set-top players that can output resolutions this high without completely choking. Nonetheless, it seems like 4K is going to be just as big at CES as 3D televisions were last year.

RED has already announced it's plans for 4K disc players, many camcorders can already record at 4K resolutions, and even YouTube allows users to upload 4K content. These are all strong indications that 4K television is coming – and sooner than we think. I just hope computers and graphics cards will be able to keep up.