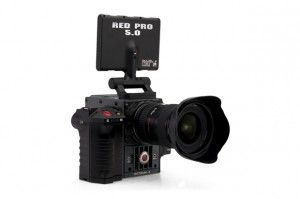 It was a busy week in camera history when both RED and Canon announced new cameras last week. Canon was the first to announce their new C300 camcorder for professional film-making, but that wasn't the only great camera announced for the market. RED also decided to steal a bit of the limelight by announcing their new Scarlet X 5K camera and pricing. Believe it or not, this isn't the first time that the filmmaking community has seen the Scarlet announced.

All the way back in November of 2009, RED first announced Scarlet to eager filmmakers by showing off pictures of the body, lenses, and accessories that looked almost too good to be true. Well….it almost was. RED soon found that most filmmakers wanted more than just a 2/3rds inch sensor capable of doing 3K. They wanted a full frame sensor that could do 4K if not more in true RED Digital Cinema style. As such their founder Jim Jannard announced a total redesign of the product and an inevitable production delay.

Many professionals thought that would be the end of the Scarlet, but then rumors began to circulate about a total refresh to the line. On Tuesday of last week, RED finally announced what that refresh was, and it's a doozy. They've upgraded the sensor size to include a 14 megapixel (or 5120×2700 pixel) array, have included the option to mount almost any type of lens including Canon's popular EF mount, the ability to capture images in 5K FF REDCODE RAW, frame rates ranging from 23.98 to 59.97, HD-SDI and HDMI outputs, 18 stops of dynamic range, wireless control, and more for only $14,000.

Though this may sound expensive, it's easy to forget that you have to pay for good build quality and professional parts. In fact, the newly announced Canon C300 costs $6,000 more and only shoots in 1080p. That doesn't mean there aren't a few caveats with RED's new design. For whatever reason, instead of having their flagship black body, RED has switched to using what they call "battleship gray" for the brain of the unit. Though it's not the most attractive look, it will undoubtedly not matter to serious filmmakers.

The more serious issue is that the camera only films at a maximum 6 fps in 5K mode, effectively making that resolution worthless for video (though useful for still photography). Even so, it does include the ability to shoot at 23.98 fps in 4K which should make many professionals happy and even at 120 fps when shooting at only 1K. Nonetheless, the RED Scarlet is a real contender for the most affordable cinema-style camera on the market today. It films at not only 24 fps at 4K resolutions, but it's also built like a tank, has a RAW (uncompressed) file format, and is modular meaning you'll be able to use it for years to come even after new camcorders have been announced.

The Scarlet X brain plus an SSD will cost $9,750 while a kit with a battery, controller, and LCD will be around $14,000. RED expects the camera to begin shipping in December.