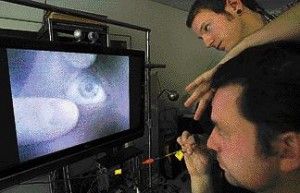 Remember filmmaker Rob Spence and the Eyeborg? We first told you about Spence and his unique eye back in March 2009 and thought wed give you an update on his status.

Spence injured an eye due to a childhood accident and had the non-working eye removed a few years ago. He has been working with scientists, engineers and doctors to outfit his empty eye socket with a prosthetic eye that is embedded with a tiny camera and transmitter.

Working with Kosta Grammatis and a few other whiz-kid tech guys, the camera wont be hooked to Spences brain – hes just using the empty socket as a holding place. In other words, he wont actually be able to see with this eye, only record events around him the same way you and I would if we were walking around with a camera at eye-level. But the possibilities are there, once the technology is developed. The publishers of TIME magazine thought the device so fascinating they dubbed it one of the Best Inventions in 2009.

People recording non-stop 24/7 similar to this type of video-recording have been dubbed lifecasters. Believe it or not, for the most part, these life-casting cameras are not being used for creepy reasons but to help people with limitations or illnesses like Alzheimers, for example, that prevent them from remembering where they were or what they did just a few hours earlier.

From clothes-cams for the military to the Eyeborg, these life-casting cameras have benefited many users. Spence says he considers himself the little brother lifecaster, and shouldnt be lumped into the Big Brother group – recorders that causes shivers up most peoples spines for one, hes really recording events that he is personally involved in rather than an unmanned all-seeing machine hovering over our heads.

Spences blog, eyeborgblog.com, is dedicated to keeping interested viewers updated on his latest tests with his camera-eye research and, yes, it really does work. He has video of the process, and even some grainy footage taken straight from his eye-cam. The whole concept is fascinating, be sure to check it out.

When – not if – this eyeborg prototype advances, over time, theres the possibility of sightless people being able to see for the first time in their lives. Science and technology have come up with some amazing innovations to help people with physical injuries overcome their limitations. From super-sleek prosthetic legs that allows the user to run faster than normal to hands with fingers that can pick up the tiniest objects, the possibilities are endless. And for a filmmaker with an embedded camera for an eye, imagine what you could record, just walking around town – talk about taking the phrase Private Eye to new heights!